The Supreme Court said Friday it will decide ahead of the 2020 election whether presidential electors are bound to support the popular vote winner in their states or can opt for someone else.

Advocates for the court’s intervention say the issue needs urgent resolution in an era of intense political polarization and the prospect of a razor-thin margin in a presidential election, although so-called faithless electors have been a footnote so far in American history.

The justices will hear arguments in April and should issue a decision by late June.

About 30 states require presidential electors to vote for the popular vote winner, and electors almost always do so anyway. 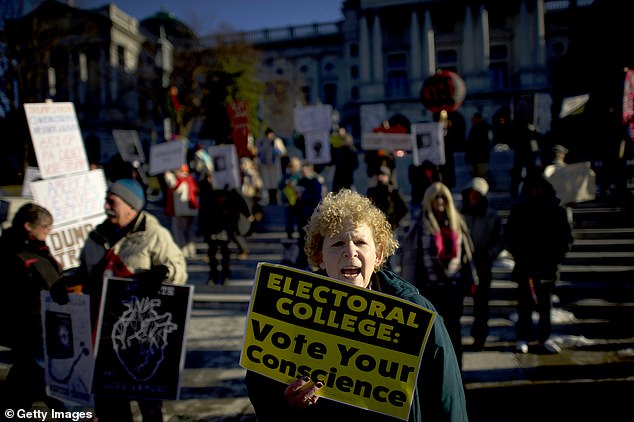 Pressure campaign: In 2016, some anti-Trump activists  wanted electors to either back Hillary Clinton in Donald Trump states, or write in a ‘unity candidate’ and a record number of electors went ‘faithless’ 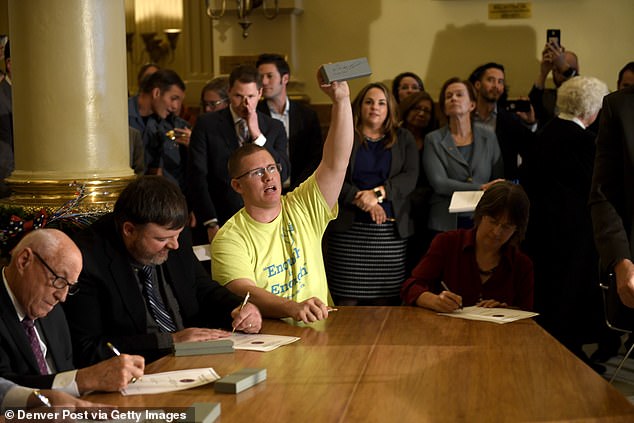 Faithless voter: Micheal Baca was removed as a Colorado elector when he tried to vote for John Kasich in a write-in. Now he is at the center of a Supreme Court case which could rock the 2020 election

The Electoral College system is established in the Constitution. When voters cast a ballot for president, they are actually choosing members of the Electoral College, called electors, who are pledged to that presidential candidate. The electors then choose the president. It takes 270 votes to win.

The elector at the center of the case, Micheal Baca, was part of a group known as ‘Hamilton electors’ who tried to convince electors who were pledged to Hillary Clinton or Donald Trump to unite behind a consensus candidate to deny Trump the presidency.

Calls for electors to go ‘faithless’ were made also made by anti-Trump campaigners who wanted the college to reflect the popular vote, which would have given Clinton a clear victory.

Almost five million people signed a petition calling on the electoral college to used their apparent right to be ‘faithless’ and put Clinton in the White House.

After a flurry of filings in state and federal courts, the electors met on Dec. 19, 2016, and Baca crossed out Clinton’s name on his ballot and wrote in John Kasich, the Republican governor of Ohio who also ran for president.

Then-Secretary of State Wayne Williams refused to count the vote and removed Baca as an elector. He replaced him with another elector who voted for Clinton.

The federal appeals court in Denver ruled that electors can vote as they please, rejecting arguments that they must choose the popular vote winner.

‘The state does not possess countervailing authority to remove an elector and to cancel his vote in response to the exercise of that Constitutional right,’ the ruling said.

That ruling applies only to Colorado and five other states in the 10th Circuit: Kansas, New Mexico, Oklahoma, Utah and Wyoming.

But in Washington, the state Supreme Court upheld a $1,000 fine against the three electors there and rejected their claims.

In asking the Supreme Court to rule that states can require electors to vote for the state winner, Colorado urged the justices to decide the case in the next few months, ‘not in the heat of a close presidential election.’

Colorado officials welcomed the court’s intervention. ‘Unelected and unaccountable presidential electors should not be allowed to decide the presidential election without regard to voters’ choices and state law,’ Colorado Secretary of State Jena Griswold said.

The three Washington electors, while contending they should be free to vote their conscience, also said the court should avoid the ‘dangerous possibility’ of having to resolve the issue following the 2020 vote.

‘We are glad the Supreme Court has recognized the paramount importance of clearly determining the rules of the road for presidential electors for the upcoming election and all future elections,’ Lawrence Lessig, the lawyer for the electors, said.