Journalists in Hong Kong have marched through the city today, as thousands of others rallied in an area popular with shoppers from mainland China following heavy clashes on the streets yesterday.

Hundreds of reporters marched from the Admiralty district near government offices through to the police headquarters, while many more descended on the Sha Tin shopping district.

Sha Tin, a town between Hong Kong island and the Chinese border, has previously been a battleground by those angered by the flood of Chinese day-trippers. 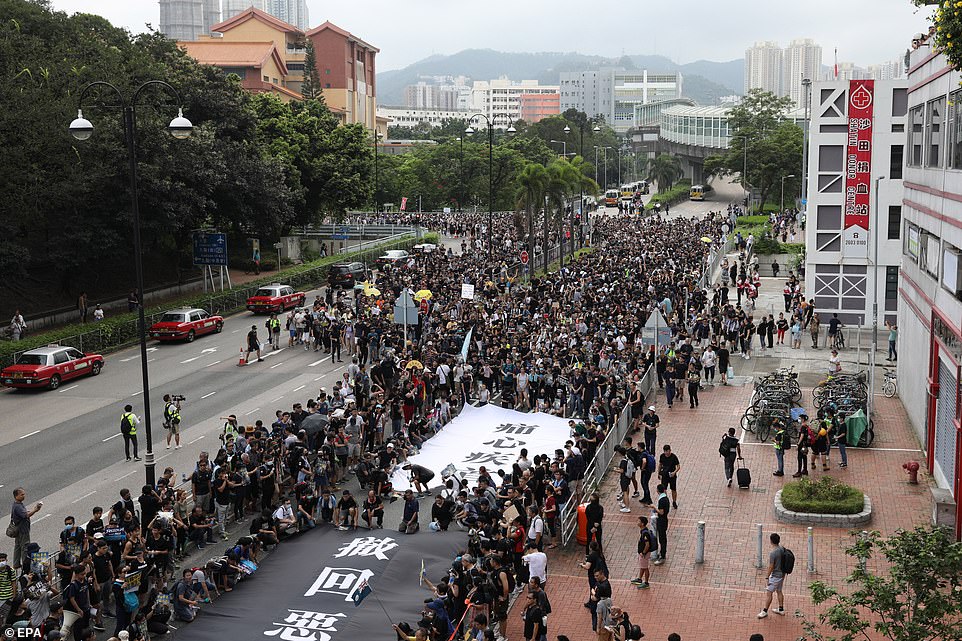 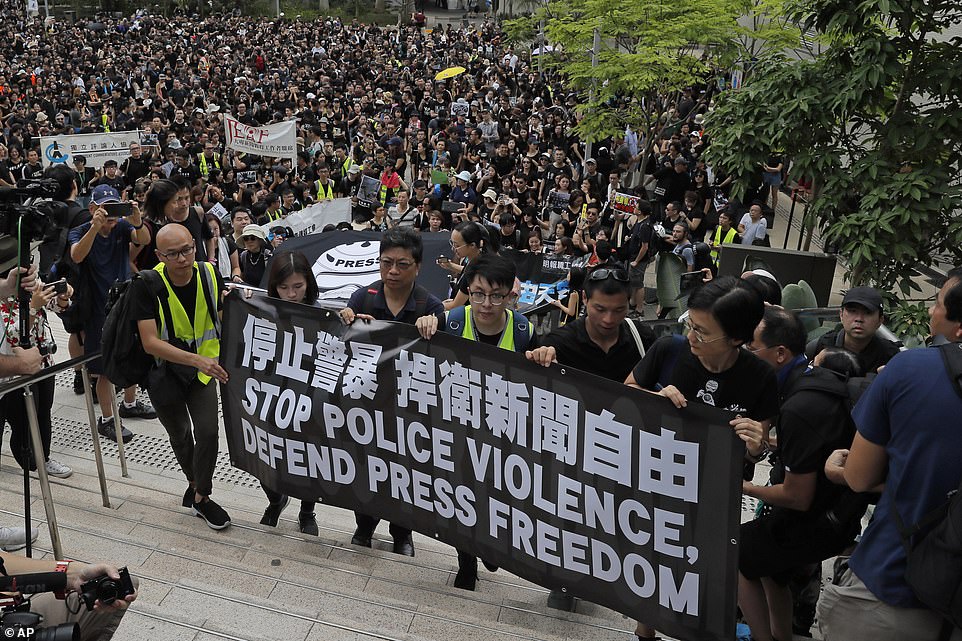 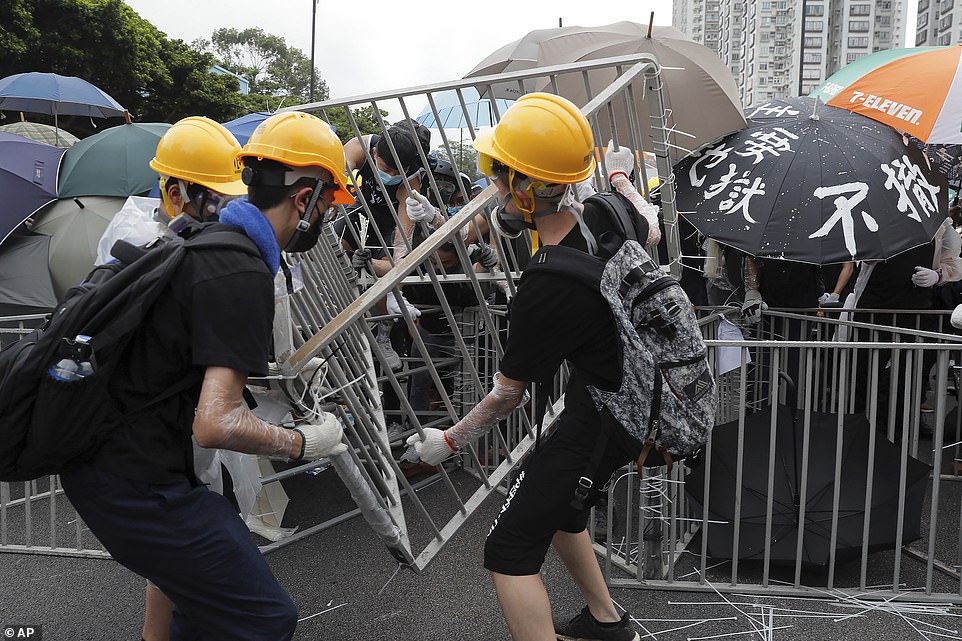 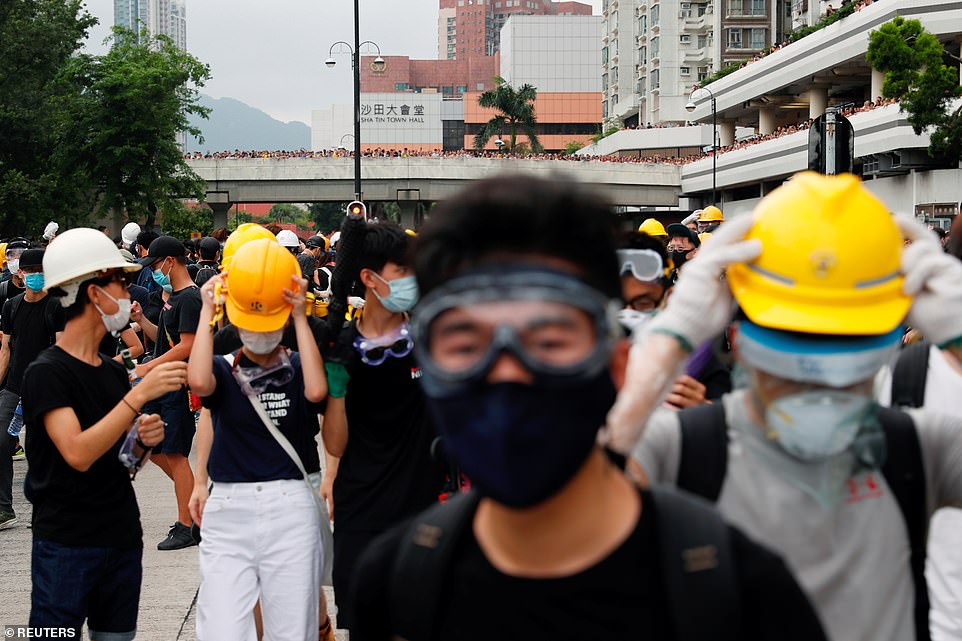 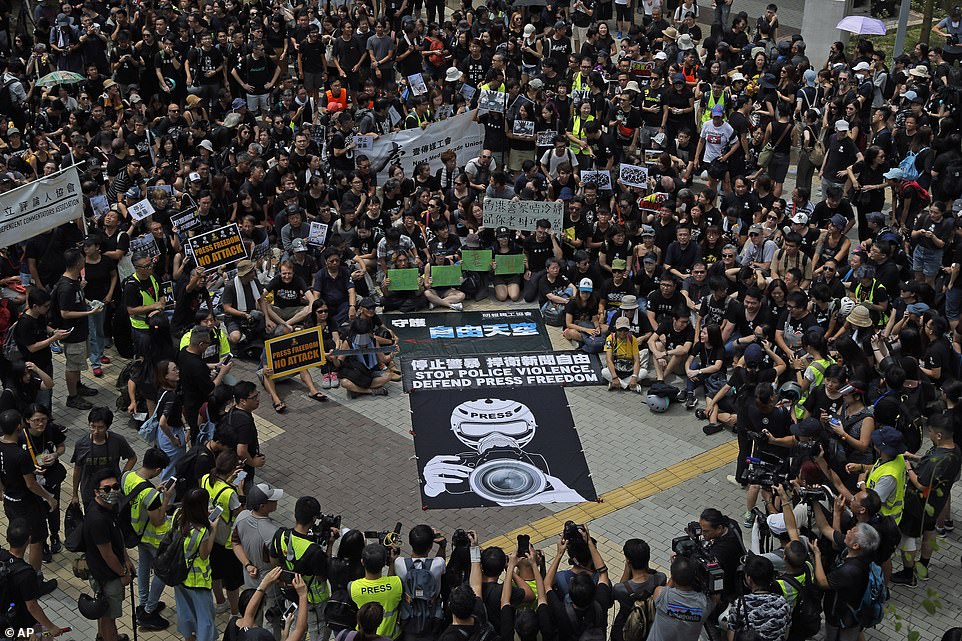 Many of the journalists today claimed they have been forced away from demonstrations by police and struck with batons as they have carried out their work over the last few tumultuous months.

They carried placards with slogans such as, ‘Stop police violence, defend press freedom.’

Ming Pao chair Wendy Yu told Reuters: ‘This march is because reporters have come out to do independent reporting and interviews during the major recent issues, and the police forces have used inappropriate methods and weapons to handle the reporters. So that’s why we have come to complain in this way.’

Yesterday’s demonstration which railed against Chinese traders in Sheung Shui began peacefully before nasty skirmishes broke out when protesters began lobbing hard hats at officers who retaliated by clobbering the demonstrators.

The demonstrators used umbrellas to shield themselves but some suffered stinging injuries, including one man seen receiving treatment in a pool of his own blood. 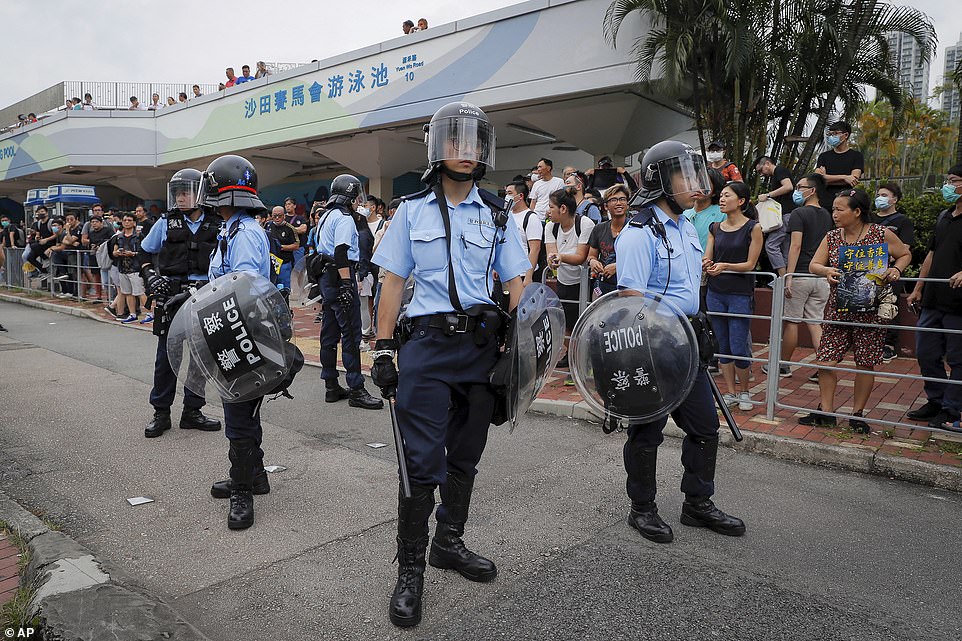 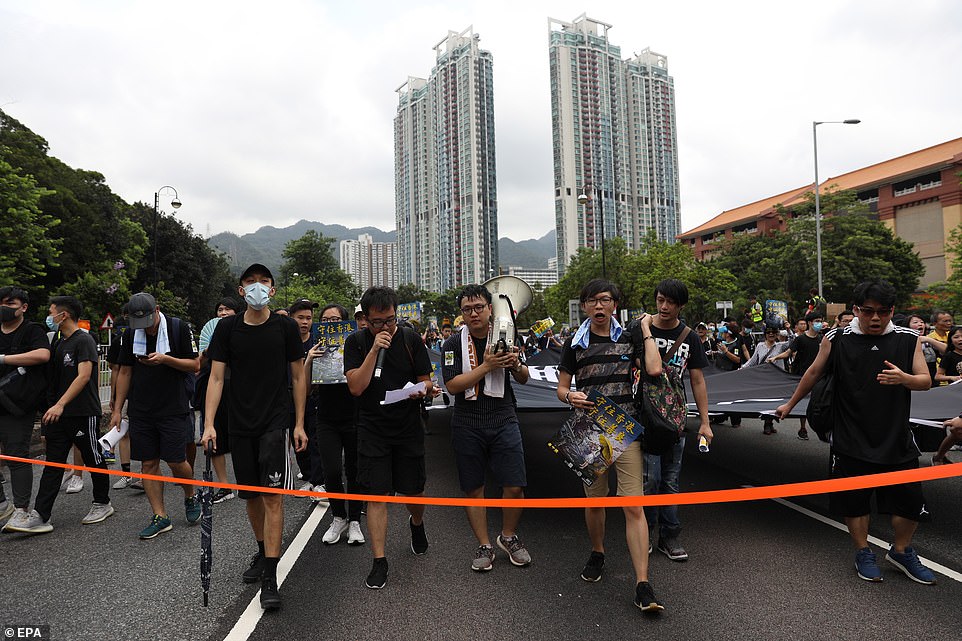 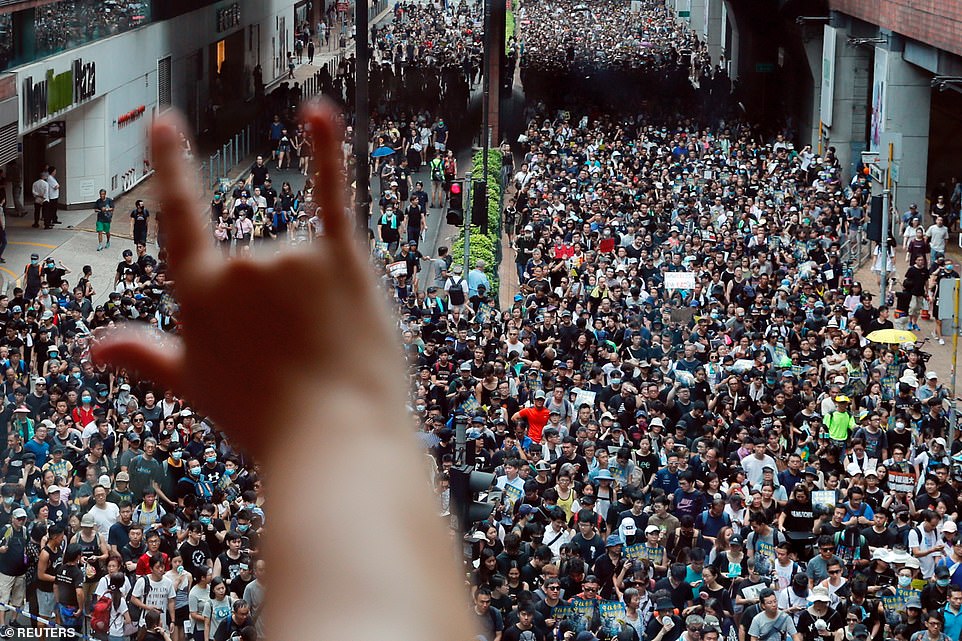 Thousands pour through the streets of Sha Tin on Sunday – Ming Pao chair Wendy Yu told Reuters: ‘This march is because reporters have come out to do independent reporting and interviews during the major recent issues, and the police forces have used inappropriate methods and weapons to handle the reporters. So that’s why we have come to complain in this way’ 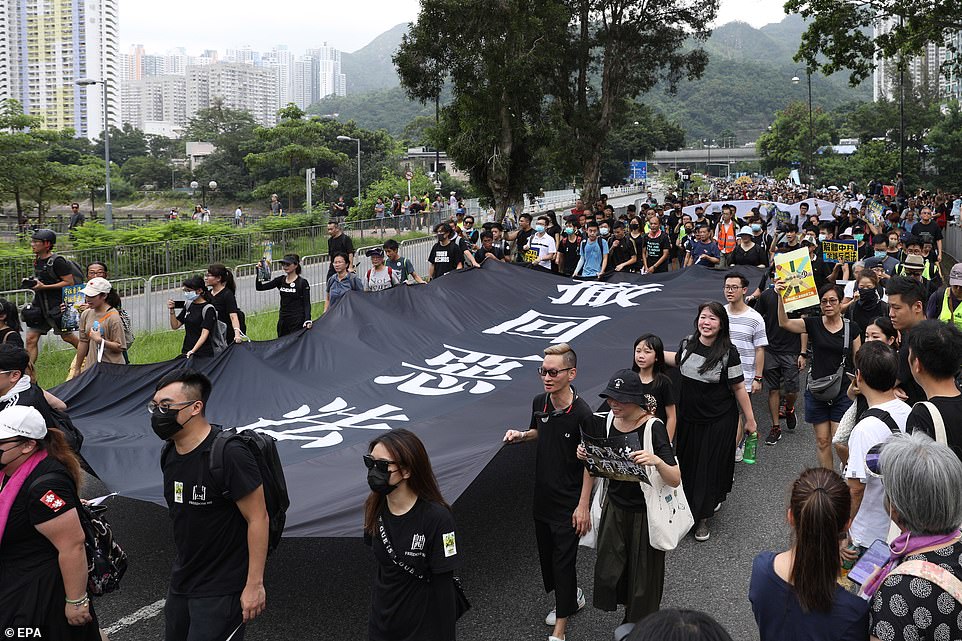 Spurred by the momentum of the anti-extradition movement, the protesters are demanding the complete withdrawal of the extradition bill, which would have allowed the transfer of fugitives to mainland China, and unconditional release of all arrested protesters among other demands. 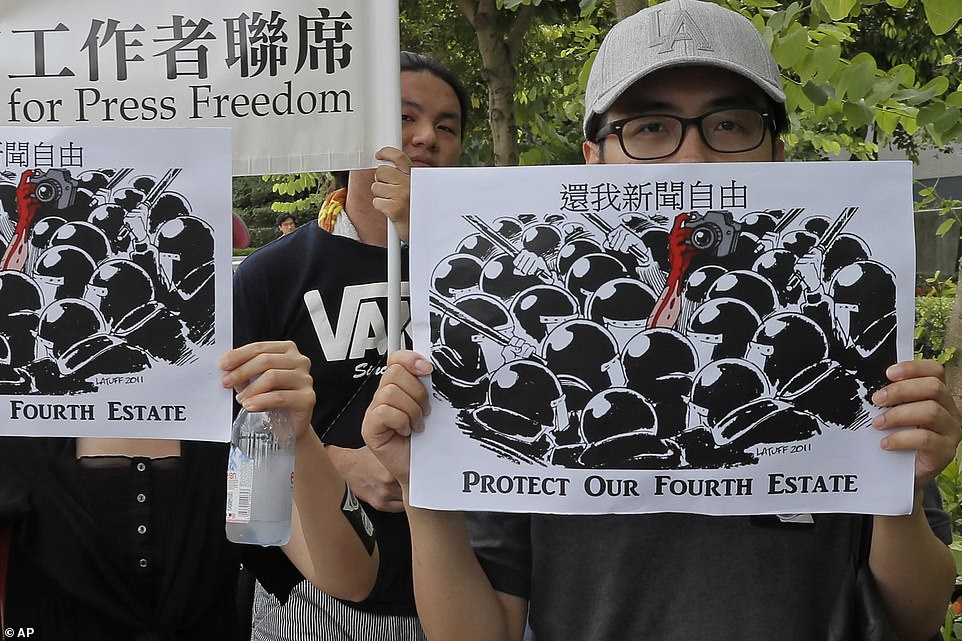 Civil unrest has plagued Hong Kong this summer as the former British colony tries to face down its biggest political crisis since it became a Chinese territory in 1997.

Protesters used the widespread fury over the hated extradition bill to drum up numbers to demonstrate against so-called ‘parallel traders’ in Sheung Shui who buy bulk quantities of duty-free goods, which they then carry back into China to sell.

The small-time mainland traders have long been a source of anger among some in Hong Kong who argue they have fuelled inflation, dodged taxes, diluted the town’s identity, and caused a spike in property prices.

It is another example of what Hong Kong citizens see as bowing to Beijing, saw a backlash in the form of violent street protests.

Hundreds stormed the legislature on July 1 to oppose the now-suspended extradition bill that would have allowed criminal suspects in Hong Kong to be sent to China to face trial. 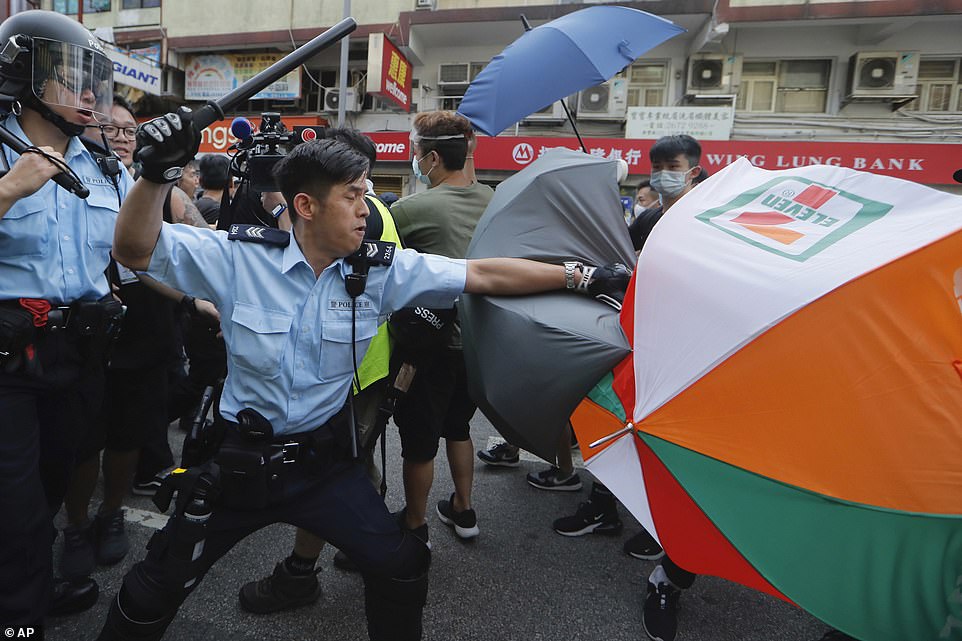 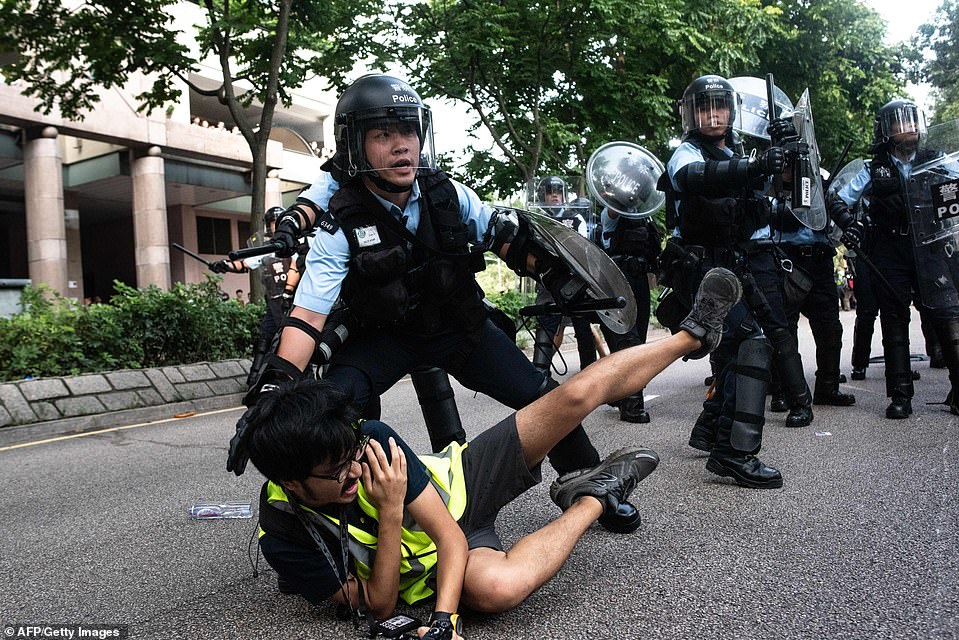 Critics see the bill as a threat to Hong Kong’s rule of law. Chief Executive Carrie Lam this week said the bill was ‘dead’ after having suspended it last month, but opponents vow to settle for nothing short of its formal withdrawal.

Protests against the bill had largely taken place in the central business district, but demonstrators have recently begun to look elsewhere to widen support by taking up narrower, more domestic issues.

Amy Chan, a 25-year-old bank employee who joined yesterday’s march, called it a continuing action following up on the momentum of the anti-extradition law protests.

‘There isn’t an anti-extradition protest every day to keep us going,’ she said. ‘I hope that through today’s action, people in Hong Kong will not forget that there are actually many other social issues waiting to be solved.’