Victoria has recorded 12 new cases and one death on Sunday as authorities consider whether to close beaches to discourage large gatherings.

Melbourne's 14 day rolling average is 11.9, which is down from yesterday.

Meanwhile, Victoria Police said it was pleased with the behaviour of most people out enjoying the sunshine on Saturday, "disappointingly there were still those who put lives at risk" by breaking COVID-19 restrictions.

"Victoria Police will be out in force at beaches and popular public spaces again (on Sunday). We will not hesitate to fine those who clearly and blatantly breach the Chief Health Officer directions," he said.

"A number of arrests were made and infringement notices issued as police had a strong proactive presence focusing on public gatherings across metropolitan Melbourne."

There were half a dozen police vehicles and more than 15 officers at the St Kilda beach foreshore on Saturday. 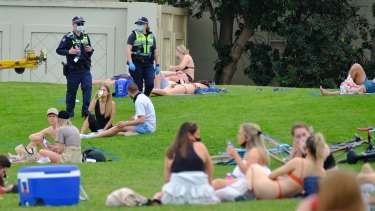 A 24-year-old man who allegedly assaulted officers in St Kilda on Saturday afternoon was arrested and is expected to be charged with assaulting police.

Premier Daniel Andrews warned on Saturday that police could move to close beaches around Melbourne if beach goers did not adhere to social distancing.

"Spending time at the beach without a mask, without social distancing now will just mean that you won't get to go to the beach for all of summer. It just doesn't make any sense," he said at Saturday's COVID-19 update.

"Victoria Police have powers. They have a steely determination to make sure people are following the rules."

The potential closure of beaches has been supported by a number of bayside council leaders. Port Phillip council chief executive Peter Smith said if illegal behaviour continued, the council would have no choice but to repeat their decision to close beaches such as St Kilda in March.

"Unfortunately, if we have large crowds of people doing the wrong thing, then we will have no choice but to close the beach or park as a last resort," he said.

Clarke Martin, mayor of neighbouring Bayside Council, told said he was desperate for Melburnians to stick with restrictions until they are expected to ease on October 19.

Mr Martin, whose council had one active case on Saturday, said he was the first mayor to put rocks in skate parks to stop gatherings in July and if the state government or police recommended closing beaches, he would support it.

Victoria recorded eight new cases on Saturday, with a woman in her 80s and two women in their 90s dying of COVID-19. 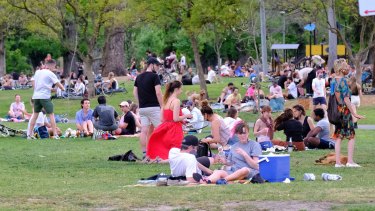 Virus clusters connected to Chadstone Shopping Centre swelled to a total of 17 cases on Saturday, with 15 cases now connected to the Butcher Club store, and two cases connected to Jasper Coffee in the same complex.

Chief Health Officer Brett Sutton said he expected the two Chadstone outbreaks to eventually be linked. There are now five staff, two customers and six household members of existing cases currently affected by the virus connected to the butcher's shop.

After Andrews’ 120, night watchman Foley enters the breach. Dan was surely watching
We and our partners use cookies on this site to improve our service, perform analytics, personalize advertising, measure advertising performance, and remember website preferences.Ok