Brexit talks ‘must end by the autumn’: UK tells EU that negotiations CANNOT go on for ever

Brexit trade talks cannot go on for ever and will need to conclude before the autumn, Britain has warned the EU.

Ahead of the next crunch round of talks this week, sources close to the negotiations said that the EU had accepted that the UK would not budge on its red lines.

It came as EU chief negotiator Michel Barnier warned Boris Johnson not to backslide on his promises. 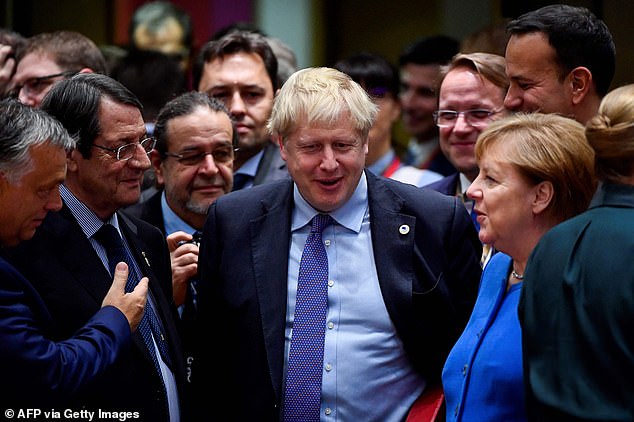 Britain has warned the EU that Brexit trade talks cannot go on for ever and will need to conclude before the autumn. Pictured, Boris Johnson speaks with Germany’s chancellor Angela Merkel and other officials at a European Union Summit in Brussels in October 2019

In an interview with the Sunday Times, Mr Barnier issued an ultimatum, saying there would not be an ‘agreement at any cost’.

He said: ‘We remember very clearly the text which we negotiated with Boris Johnson. And we just want to see that complied with. To the letter… And if that doesn’t happen, there will be no agreement.’

In response, a UK source close to the negotiations said yesterday: ‘We expect next week’s round to be constructive and keep the process on track. But then we are going to need things to move forward faster.

‘The EU seems to have finally understood we aren’t going to move on fundamentals, so they now need to think quickly about how they can find an agreement that reflects this reality. 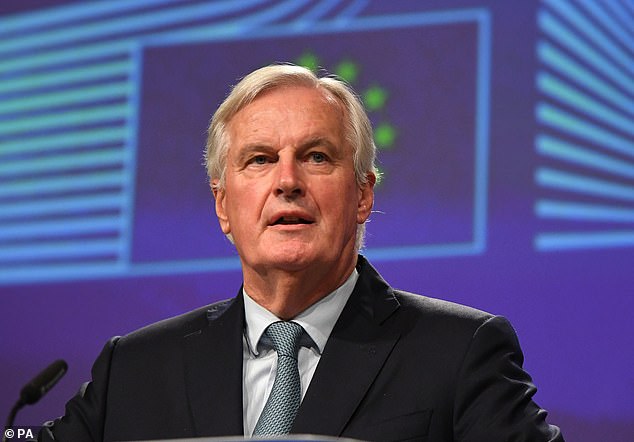 EU chief negotiator Michel Barnier warned Boris Johnson not to backslide on his promises and issued an ultimatum, saying there would not be an ‘agreement at any cost’

Boris Johnson has ‘changed his mind’ over the deal with Chinese telecoms giant Huawei, according to a senior Government source.

The company is to hold crunch talks with Downing Street this week following reports No 10 is seeking a way out of the deal to let Huawei build 35 per cent of the 5G network.

The meeting with Sir Edward Lister, one of Mr Johnson’s senior aides, has been described as a ‘clarifying moment’ for the company.

A senior Government source told the Sunday Times the Prime Minister wanted to use a new security review ‘as cover’ for getting out of the deal.  Another said Mr Johnson’s ‘attitude has changed’.

It is understood that No 10 has drawn up a plan to phase out the role of Huawei by a fixed date, with 2023 floated as a possible deadline.

‘Talks cannot go on for ever. The UK has to make sure businesses can prepare properly for what will happen at the end of the year.’

Government sources have accused the EU of stalling the talks into the autumn, when it will be too late for businesses to prepare.

A senior Government source said: ‘The EU needs to inject some political reality into its approach and appreciate that they cannot use their usual tactic of delay to drag the talks into the autumn.

‘October is too late. Our businesses need to know whether there is going to be a trade agreement before then to prepare for the end of transition.’

The latest round of negotiations ended in stalemate after the two sides failed to reach agreement on key areas including fishing, a level playing field between British and EU companies and the role of European courts.

The next round, which begins this week, is crucial as negotiators will have to determine whether sufficient progress has been made, or resort to no-deal planning.

Privately, negotiators expect the pace to pick up in July following a meeting between the Prime Minister and EU Commission president Ursula von der Leyen.