Alex Rodriguez has been vacationing in the same area as his ex Jennifer Lopez and her new man, Ben Affleck. But the former athlete is seemingly unbothered.

Alex Rodriguez, 45, appears to be thriving while yachting around Europe, despite his ex Jennifer Lopez, 51, and Ben Affleck, 48, jetting off on a PDA-filled vacation. “1 or 2?” he captioned a July 28 Instagram post, which featured a black and white snap of him taking an outdoor shower on the back of a luxe boat. The former MLB star posed shirtless, wearing nothing but a pair of black swimming trunks and a silver pendant necklace.

Earlier in the day, the former Yankee was photographed with Melanie Collins. He was seen driving a jet ski, with the NFL reporter seated right behind him on the vehicle. A-Rod had a huge smile on his face as he jetted around the crystal blue water alongside Eric Decker and Jessie James Decker, who rode on a jet ski of their own. Earlier in the day, the group actually drove right past the boat that A-Rod’s ex, Jen has been celebrating her 52nd birthday on, with Ben! 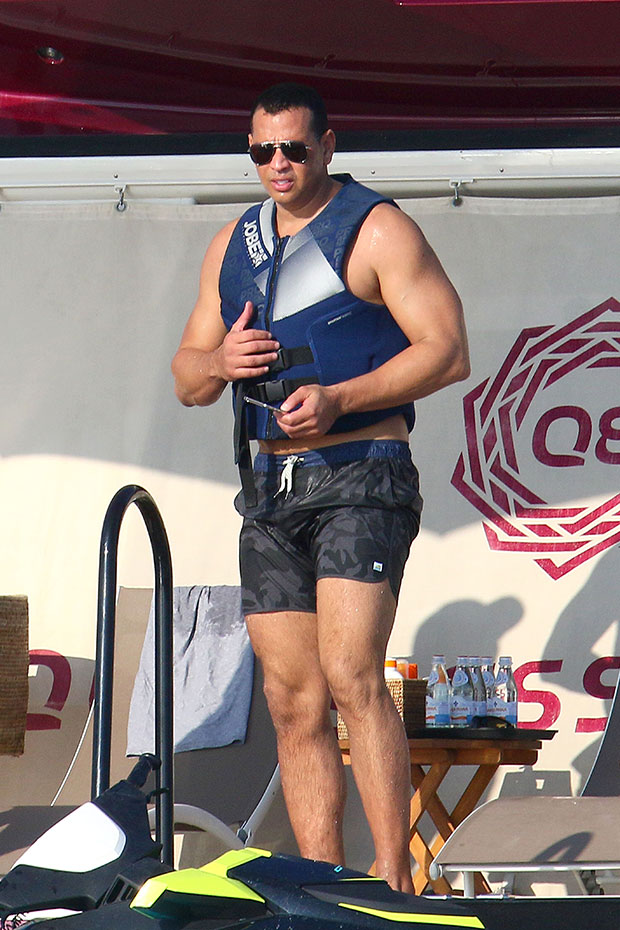 The first official Bennifer post on IG was shared by Jen’s pal Leah Remini at her 51st birthday bash. The black-and-white photo booth image appeared in a video montage shared by Leah (32 seconds in, to be exact), and showed Jen resting her hand on Ben’s chest as she gave the camera a demure smile. Now that they’ve made it social media official, it seems the pair aren’t shying away from the camera, with the duo looking very loved up in a series of pics and videos from J.Lo’s 52nd birthday party.

Prior to their luxurious European getaway, the couple had been inseparable, hanging out with their kids around Los Angeles and near Jen’s mansion in the Hamptons. Ben’s son Samuel, 9, even joined Jen’s twins Max and Emme, 13, for an action-packed day at Universal Studios, before they were spotted enjoying a blended family hangout at the Brentwood Country Mart.