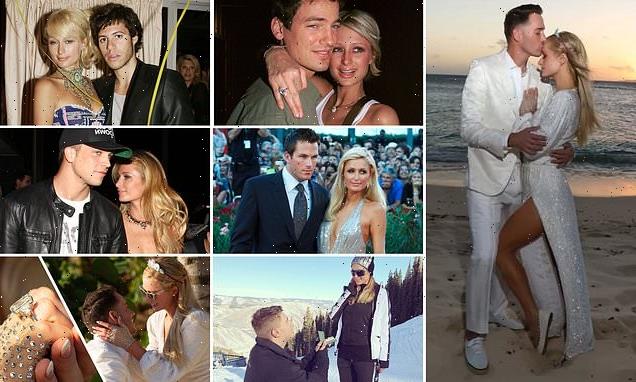 With this bling, I thee wed! Ten dresses, a £1.5 m ring, three days of partying and – of course – everything filmed for reality TV. As Paris Hilton finally makes it down the aisle, ALISON BOSHOFF takes a look at the wedding that taste forgot

The bride-to-be says she is dreaming of something ‘classic and beautiful’. But with Kim Kardashian as a guest, ten wedding dresses to be worn by the bride over three days, and plans to televise the entire event, Paris Hilton’s forthcoming wedding will be a nuptials like no other.

This will hopefully be the happy conclusion to a rumoured sixth engagement for Paris, who has spun the role of unemployed heiress into a lucrative media empire. After 18 years of selling herself, she’s worth a reported £225 million.

So far she’s had three hen parties, including one in Vegas with stilt-walkers, another featuring a champagne vending machine and tins of sparkling water decorated with the faces of the bride and groom.

Every last element of decadent excess has been filmed for her new TV series, Paris In Love. The first episode will air on her wedding day itself.

The bride has already undergone IVF treatment and is planning to have twins, which ought to take care of series two.

So who is going to the wedding? What is it costing? And will anyone buy the $1,000 crystal caviar server which is on her wedding list? ALISON BOSHOFF reports . . . 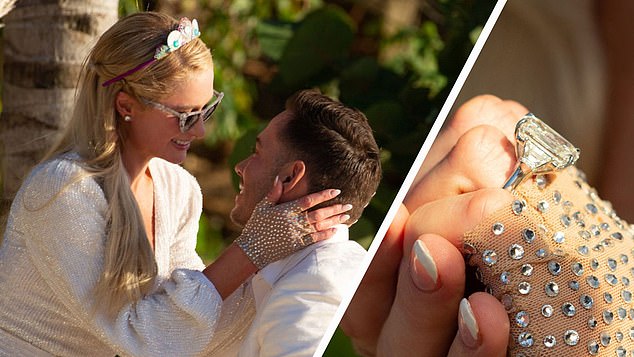 Yes to for ever: The £1.5m ring Carter Reum gave Paris when he asked her to marry him (left)

HOW LOVE BLOOMED DURING LOCKDOWN

Her intended is Carter Reum, also 40, a family friend whom she has known for 15 years. Reum comes from money — his father, Robert, is the boss of Amsted Industries in Chicago.

He went to Columbia University and works as a venture capitalist. He’s also written a book — about business rather than fame.

He and Paris started dating in December 2019. He said: ‘From our very first date, I was able to get to know the real Paris.

‘As people who have seen her documentary and advocacy work know, Paris is kind, smart, driven, authentic and an amazing woman, and I can’t wait to have her as a partner in life.’

He added: ‘The good and the bad of a creative mind like Paris’s, her creativity flows out in music, and art, and all these things. When it comes to keeping the house clean, her creativity also comes out. Every day is like a treasure hunt.’

Paris says the pandemic accelerated their romance: ‘The silver lining [of lockdown] is that I get to be with my pets and my boyfriend. We have gotten so close. The amount of time we’ve had together is what would normally take five years.’

A pretty hotels heiress with a taste for designer handbag dogs and a nice line in deadpan bons mots — ‘always walk round as though you have an invisible tiara’ — Paris Hilton became globally famous in 2003 when a sex tape featuring her and former boyfriend Rick Salomon was circulated. Paris deplored Salomon’s betrayal, but nonetheless she lapped up the attention and with it became America’s number-one It-girl.

She was raised between mansions in Beverly Hills and The Hamptons and a suite at the Waldorf Astoria in Manhattan. She was briefly jailed in 2007 for a parole violation after being convicted of driving under the influence a year earlier.

In 2010, she was accused of cocaine possession after the drug was found in a handbag.

She said the bag couldn’t possibly have been hers because it was not a designer brand. The matter was settled via a plea bargain.

In recent years Paris has enjoyed global success as a DJ, and a social media influencer.

SEALED WITH A £1.5 MILLION RING

On her 40th birthday last February, Carter presented her with an enormous emerald-cut diamond ring, designed to his specifications by Jean Dousset — the great-grandson of Louis Cartier.

It features a 20-carat emerald-cut diamond, framed by two shield-cut diamonds, surrounded by small pave diamonds for extra sparkle. It has her initial engraved inside it. Paris said: ‘I’m so obsessed with it. It has like 15 diamonds going around and then inside it has a “P” with a sapphire.’

A FLASHY PROPOSAL ON A TROPICAL BEACH 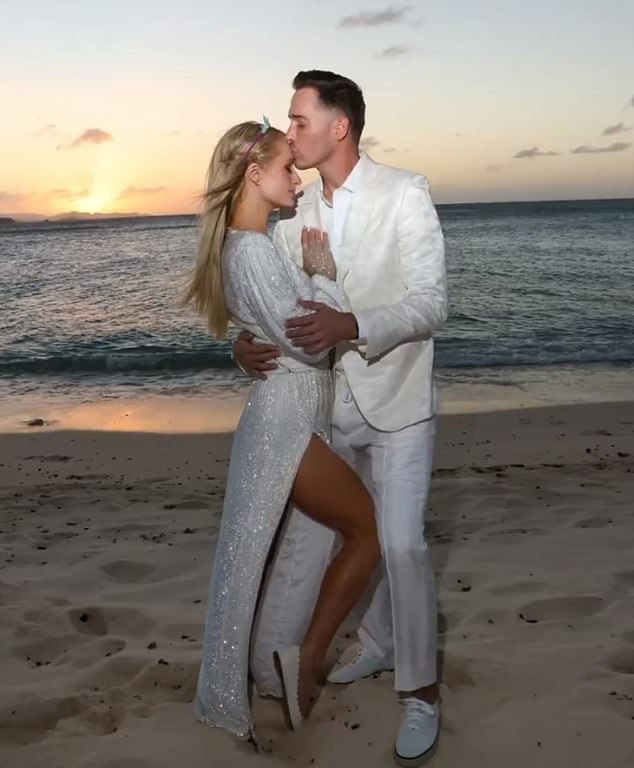 Sealed with a kiss: Paris and Carter pose after she accepted his marriage proposal

Carter donned a white suit to propose to Paris on the beach of a private island. Also present were her mother, sister and brother-in-law, plus Carter’s brother and parents — and a photographer.

Paris had dressed up for the occasion and was wearing a full-length sequinned dress, plus a tiara and a curious pair of rhinestone studded fingerless gloves.

She told her podcast she had thought he was going to ask her to marry him in December 2020, when they were celebrating their one-year anniversary.

‘When it didn’t happen, I didn’t say anything but I was a little bummed,’ she said.

She dropped a hint and was told: ‘When I do ask you, it’s going to be something even more amazing than this.’

Two months later, he got down on one knee on the beach after telling her to dress up to take some photos with him. She said: ‘I just started shaking and crying because I was so excited, so happy.’

On Instagram she wrote: ‘When you find your soulmate, you don’t just know it. You feel it . . . For my birthday, he arranged a special trip to tropical paradise. As we walked to dinner along the beach, Carter led us to a cabana adorned with flowers and dropped to one knee. I said yes, yes to for ever.’

The happy couple had a joint bachelor and bachelorette party in Las Vegas last month. They flew in on a private jet, then took a red Rolls-Royce to their hotel. Reports suggest that after clubbing and late-night zip-lining, they moved on to a marquee lit up with both their names, and gave pals memorabilia including rosé wine in tins labelled: ‘Drunk in love’

‘I DO’ UNDER THE SPOTLIGHT 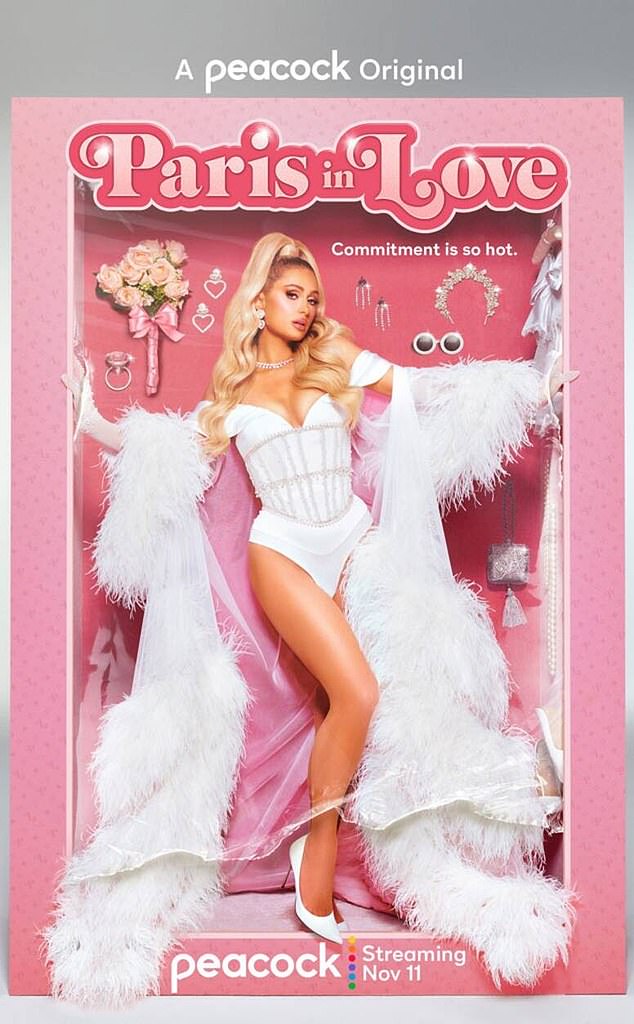 The wedding will provide a ratings-grabbing finale to the series Paris In Love, shown on the Peacock network

The wedding will provide a ratings-grabbing finale to the series Paris In Love, shown on the Peacock network.

Trailers for the 13-part show see Paris tearfully saying: ‘I just don’t want to be alone for ever.’ Yet in another clip she appears to be having some second thoughts, saying: ‘I want to make sure I make the right choice.’

WEDDING VENUE WITH A FAMILY LINK

Paris and Carter will make their vows at her late grandfather Barron’s estate, where their initials have been spelled out in the flowerbeds and a huge dance floor has been built.

A source told celebrity website Page Six: ‘They were going to get married in church, but they switched it a week or so ago.

‘They sent out a save-the-date. They didn’t include the location, but [the reception] is going to be at Barron’s house.’ 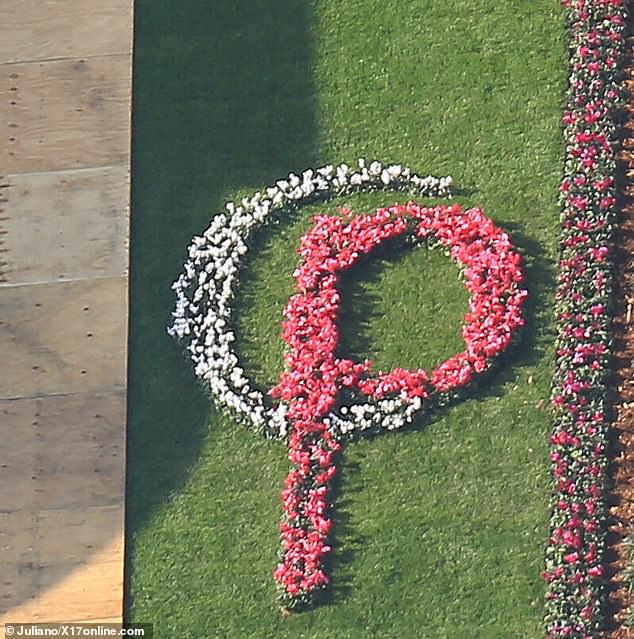 Paris and Carter will make their vows at her late grandfather Barron’s estate, where their initials have been spelled out in the flowerbeds (pictured) and a huge dance floor has been built

Kim Kardashian and Kris Jenner are definitely going. Nicole, Sofia and Lionel Richie also look certain to attend. Party planner Mindy Weiss, who has looked after numerous Kardashian mega-parties, is said to be helping to plan.

The couple have a £45,000 wedding gift registry through luxury store Geary’s Beverly Hills. Among the items is a £380 Hermes plate.

Paris says she will be wearing ‘lots of dresses, probably ten’. In one trailer for her show, she is seen trying on numerous dream gowns. Sister Nicky wore a £65,000 Grace Kelly-inspired gown by Valentino for her 2015 wedding to banking billionaire James Rothschild.

COULD IT BE SIXTH TIME LUCKY?

This is possibly Paris’s sixth engagement. Her first fiance was model Jason Shaw — they got engaged when she was 21 and he 29, and he presented her with a pear-shaped diamond.

They split a few months later, with Paris saying she was too young to make such a commitment.

In 2005, she got engaged for the second time, to Greek shipping heir Paris Latsis. After an eight-month romance, he gave her an incredible £3 million canary diamond ring which was so heavy that she complained it hurt her hand.

Within four months they had parted ways, and she auctioned off the ring in aid of the victims of Hurricane Katrina.

In 2009, she started dating former baseball player Doug Reinhardt and they were said to be engaged. She said: ‘I would not rule out a wedding in 2010.’ But they split that year, with Reinhardt complaining he had spent £1.5 million lavishing her with gifts and holidays, while she hadn’t bought him so much as a cup of coffee.

Her next serious boyfriend, in 2012, was Ibizan model River Viiperi, who is ten years her junior. There were reports of an engagement, but they split in 2014.

Actor Chris Zylka proposed in February 2018 with a £1.5 million pear-shaped diamond ring. She called him ‘perfect for me in every way’, but they split nine months later.

THE PITTER PATTER OF TINY FEET?

Stand by for babies, as Paris says she has had eggs harvested ready for implantation after the wedding.

‘It’s something we’ve talked about a lot ever since we’ve been together,’ she said. ‘First the wedding, then the babies. We have been doing IVF, so I can pick twins if I like. I want twins, because then you get a girl and a boy at once.’

She wants to call her future daughter London and has a name picked out for her son — based on a geographical place — but she’s keeping that a secret for now. 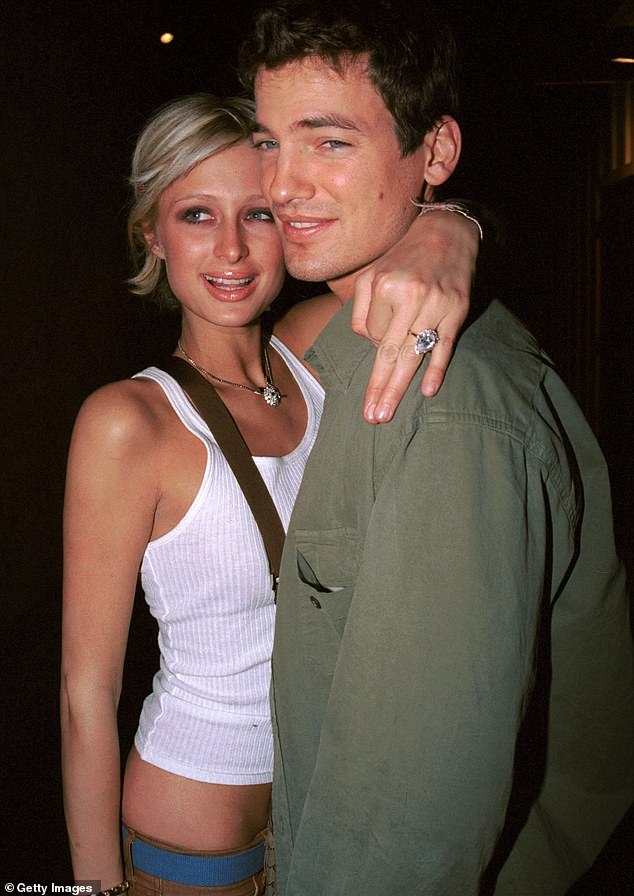 Young love: Paris first got engaged at 21 to model Jason Shaw, but they soon split up 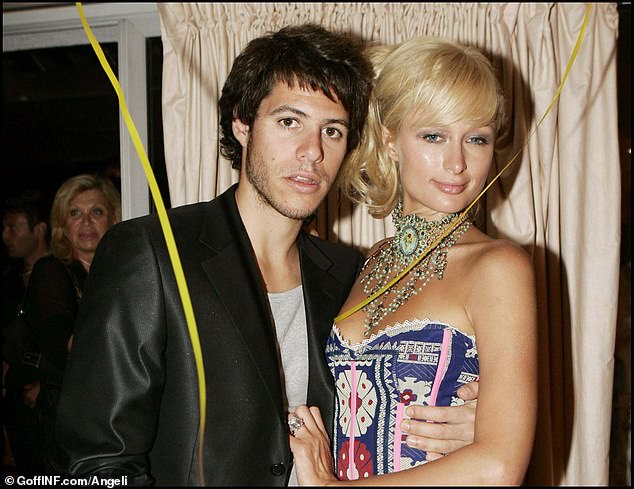 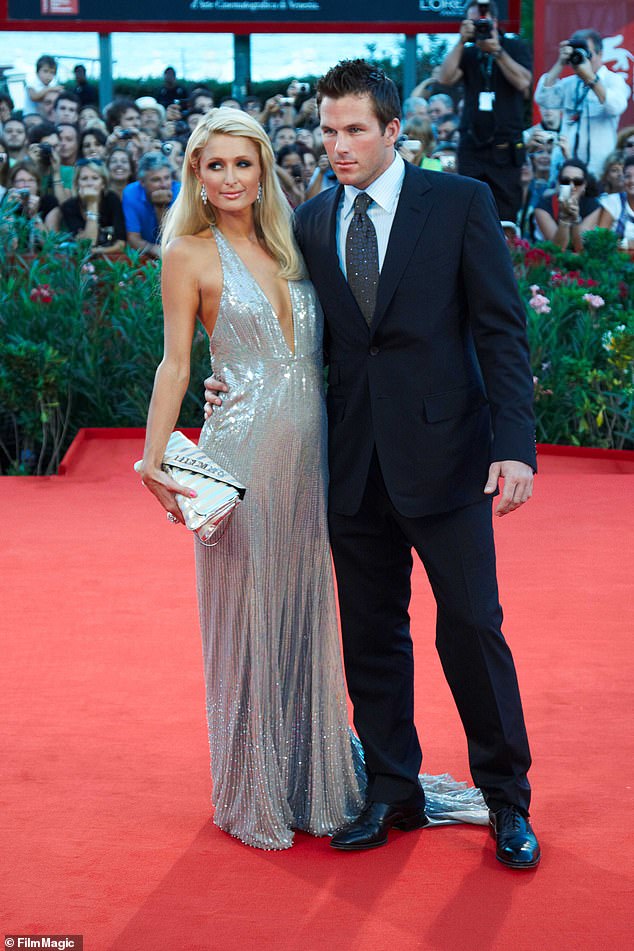 Strike out: Paris and former baseball player Doug Reinhardt broke up in 2010 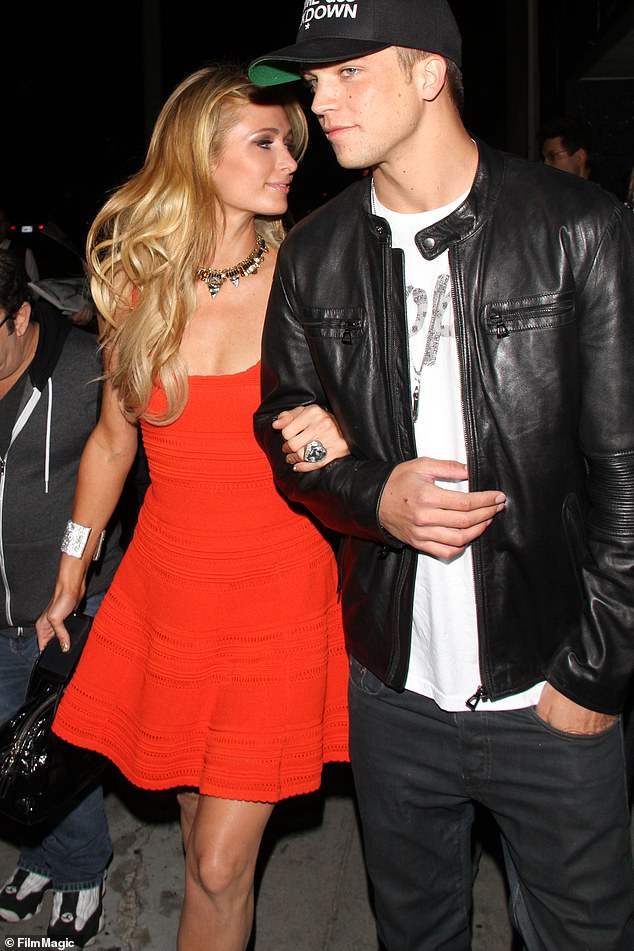 Spanish eyes: Paris with her Ibizan model ex, River Viiperi, who is ten years her junior 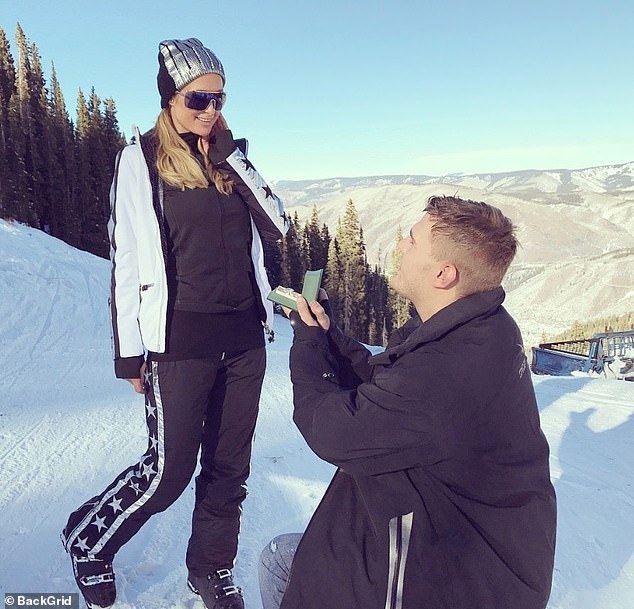 On top of the world: Chris Zylka proposes on a mountain in 2018 — but they split months later