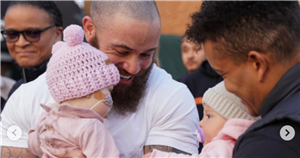 Ashley Cain shared the moment his baby daughter Azaylia was able to meet her baby cousin for the first time, without a pane of glass between them.

Born just six days apart, little Azaylia and Anaya were finally able to meet as their families met up outside.

Sharing the news with his 1.5 million followers, 30-year-old Ashley celebrated “one special moment at a time”, amid his baby girl's heartbreaking leukemia battle.

In an emotional post on Instagram and alongside pictures of the babies meeting, he penned: “One special moment at a time. When Azaylia finally got to see her cousin Anaya without a pane of glass between them, it melted my heart.

“The two little princesses were born only 6 days apart and when they first touched hands for the first time, it sent immense amounts of emotion through my body.”

The proud fathers held their daughters up while their children touched hands surrounded by family members for the momentous occasion.

He continued: “It made me happy, so happy, but with sorrowful tears. We take each day at a time on this journey.

“So it’s important to enjoy today, because yesterday is gone and tomorrow isn’t promised. Another day baby … Another day! LETS GO CHAMP! I LOVE YOU.”

The doting dad took to his Instagram stories to share the event with his fans as she was held by her uncle and bounced comfortably in his arms.

Baby Azaylia was diagnosed with a rare form of leukaemia when she was just eight-weeks old.

The Ex on the Beach star and his partner Safiyya Vorajee initially began fundraising to fly Azaylia to Singapore for life-saving treatment, raising over £1.5 million.

However, in a heartbreaking update, the couple were told Azaylia's condition had taken a turn for the worse and were told she may only have days to live.

Despite the devastating news, the pair are taking each day at a time and enjoying every moment with their precious daughter.

Ashley has praised his little girl for her bravery and has said that he has a "crazy belief that she will still be with us next week".

He said: “Even though she doesn’t have much energy, she loved to see her surroundings today and had the loveliest little play time. We even got a smile which was worth more than anything money can buy.

“As a parent it’s the hardest thing in the world to see your child like this, at home with the painful inevitable fair pending.

“But we aren’t counting the days right now, we’re just doing our best to make those days count.”