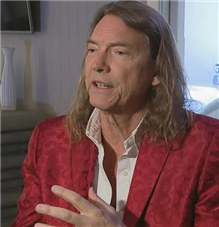 The 63-year-old was charged with one count of rape of an unconscious person and five misdemeanor counts of nonconsensual touching, Orange County District Attorney Todd Spitzer told The Los Angeles Times.

Prosecutors maintain that Hutchinson sexually assaulted a pair of 16-year-old females while they were vacationing with him in April in Laguna Beach.

He raped one of them on April 1 and sexually assaulted the other four times during that trip, the district attorney has said.

The reality star and real estate mogel is then accused of returning to the property a second time with one of the girls and committeing a sexual battery on her on a separate visit to the same location.

The news comes on the heels of Hutchinson’s arrest in Texas, where he’s accused of assaulting a different 17-year-old girl at his Highland Park residence on May 7.

This allegedd victim claimed to authorities in Dallas that she moved in with Hutchinson and his family in March 2021 so she could finish her junior year of school at the local high school because her family moved to another area of the state.

The teenager said she witnessed “on multiple occasions Hutchinson would provide alcohol and allow the children to smoke marijuana.”

She went on to say Hutchinson “inappropriately” touched her while she was in her bedroom, including “massages, touching of her breast and nipples.

It gets more explicit and disgusting, too.

The girl claimed to police that Hutchinson also “digitally penetrated her vagina with his finger without her consent” when she was intoxicated and had fallen asleep on the sofa.

She explained she was “frozen with fear and [Hutchinson] only stopped when he noticed blood on his finger,” the affidavit reads.

Prosecutors say, if convicted, Hutchinson faces a maximum sentence of 8 years in state prison and 2.5 years in Orange County jail.

In a statement to The Dallas Morning News, the seemingly heinous human being said he’s innocent of all charges.

“Anyone who knows me in this city knows that I am not capable of assault, sexual or otherwise,” he told this newspaper.

“Hopefully all of my colleagues and friends will give me the benefit of the doubt until I prove my innocence in court.”

Founder of the real estate firm Dunhill Partners Inc. in Dallas, Hutchinson has been featured for two seasons on Marrying Millions.

The awful program follows wealthy people as they pursue romantic relationships with partners who are far below their income level and, often, their age.

On the show, Hutchinson is engaged to 23-year-old Brianna Ramirez, whom he met at a Tex-Mex restaurant in Dallas where she was a hostess.

He has been married twice before and has six children.

The couple spoke to Fox News back in August where Hutchinson discussed how he and Ramirez navigate a 40-year age difference.

“I think women are more mature than men, and I think I’m probably very immature for my age,” Hutchinson said at the time, adding:

“I always tell my 16-year-old daughter boys are idiots. Boys are dumb. Don’t fall in love. Don’t get hurt. Don’t cry. They’re not worth it. Wait till you’re older.”

Maybe the only person in the history of reality television to make Josh Duggar look good not absolutely horrible.