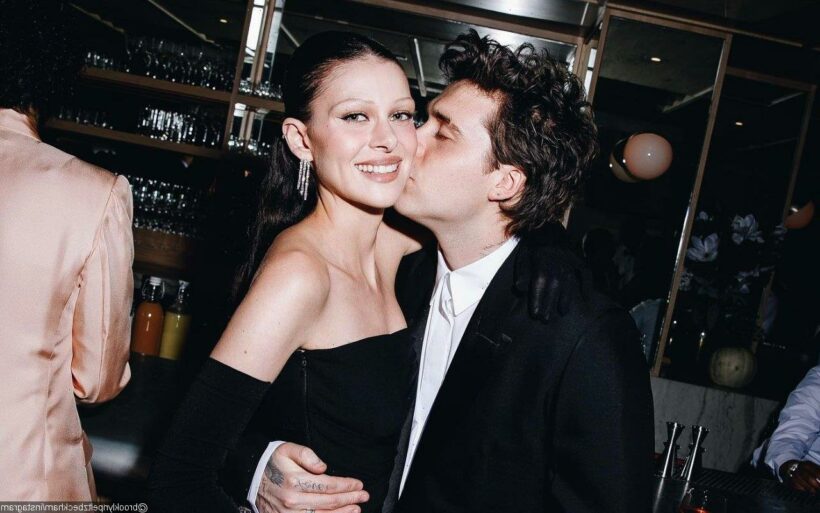 When sharing sweet photos of him and the actress, the eldest son of David Beckham and Victoria Beckham a.k.a. Victoria Adams gushes, ‘Can’t believe it’s been 3 years, I feel like I have known you my whole life.’

AceShowbiz –Brooklyn Beckham let the world know how proud he is to have Nicola Peltz as his wife. When celebrating their anniversary, the eldest son of David Beckham and Victoria Beckham (Victoria Adams) unleashed a topless photo of his spouse on Instagram.

In the first photo, the 23-year-old could be seen snapping a picture of the “Bates Motel” actress, who covered her chest with her hand. She softly smiled at the mirror while her man stood behind her wearing shorts.

The second snap showed Brookly planting a sweet kiss on Nicola’s cheek during a party. In the last image, the English heartthrob was seen hugging his wife from behind as they took a mirror selfie.

In the caption, Brooklyn gushed, “Can’t believe it’s been 3 years, I feel like I have known you my whole life.” He added, “Happy anniversary to my other half, my best friend and to my gorgeous wife x could not live this life without you.”

Also marking the special milestone was Nicola. Sharing photos the two enjoying an oceanside vacation, she raved, “happy 3 years baby, I fall more in love with you every day. I’m so lucky I have you as my husband.”

Brooklyn and Nicola first sparked romance rumors in 2019 after they were spotted at a 2019 Halloween party. They went Instagram official later in January 2020.