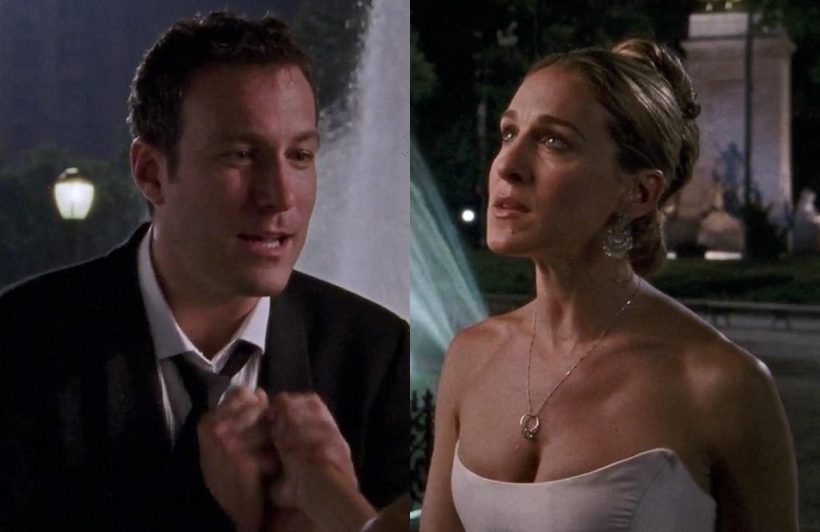 OMG what a twist!

Possible spoilers for the Sex And The City revival, we suppose — though most of this is still in the speculation arena for now…

Well, one thing is confirmed anyway: Aidan Shaw is back! Which means all those #TeamAidan fans still have a chance!

During an interview with Page Six on Thursday, John Corbett was asked about the HBO Max revival, and it turned out he knew quite a bit about it already! He revealed:

Calling the news personally “very exciting” he said of the cast and crew:

“I like all those people, they’ve been very nice to me.”

However, he teased even more — this is NOT a cameo! He’s actually a Big part of the revival plot as he revealed he’s in multiple episodes of the show:

Is this really happening? Could it be?? Could they be writing a new happily ever after for Carrie Bradshaw??

In the show, she eventually breaks things off with the guileless furniture designer to end up with Chris Noth‘s cigar-chomping Mr. Big, despite many fans thinking Aidan was the better catch. Just as love for the show has carried on, so has the debate between the two love interests.

Sarah Jessica Parker herself has always been Team Big, saying in an interview last year:

“You have to be Team Big, or Team John (Big’s real name) I guess, only because you can’t tell a story that long and not in the most conventional way kind of root for that ending.”

“Selfishly I like to win, my characters like to win. But no, there’s no other way for that formula to go down except with Mr. Big. It wouldn’t have been a good show if she’d ended up with this guy, .”

Well, we don’t know about that. We’ve done the polling, and nearly half the fans still think Carrie could have had a happier ending with Aidan. 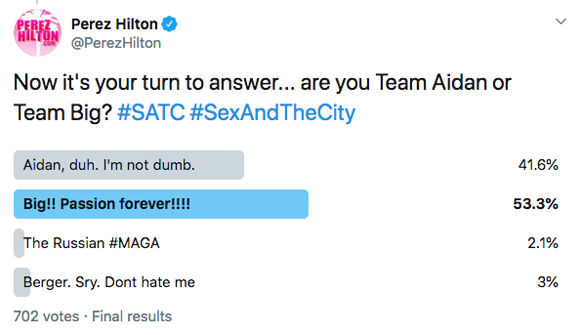 Is it possible the writers are leaning that way, too?

We did hear Mr. Big was not returning for the revival — though Chris Noth himself said we shouldn’t necessarily believe that rumor. It would be a way to shake things up…

So far the only thing we know for sure is that Kim Cattrall won’t be back. Just as with the idea of a third movie, she has fully rejected any chance of returning due at least in part to bad blood with her former castmates.

Asked about that friction on set, Corbett said he didn’t see any of it at the time:

“I only worked with Sarah Jessica Parker. I think I had one scene with all the girls.”

However, he did hang out with them a little and never saw any beef cooking:

“They were always cordial. Cordial with me. I got to know the other girls because when you show up for work, you’ve got to wait a few hours while they finish up a scene, but we always had nice chats and hugs. I never saw it or heard about it.”

TBH, neither did we until it was all over. Oh well.

Let tell us, SATC fans, would YOU be happy with Carrie ending up with Aidan instead? Or is it SATCrilege?? Let us know in the comments (below)!