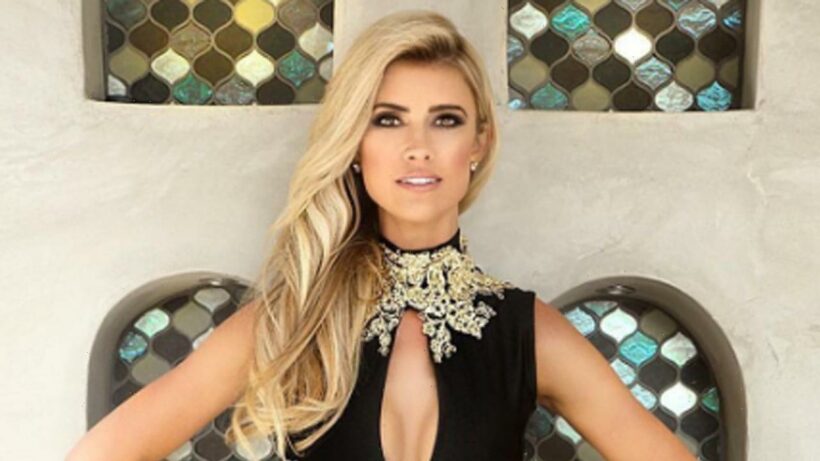 Christina Haack is moving on, and doesn’t care what others have to say about it!

The Christina on the Coast star, who turns 38 on Friday, took to Instagram to address her new relationship with Joshua Hall. The post comes just days after they were photographed holding hands while walking through the Los Angeles International airport.

“I met Josh when I wasn’t in a state of fear or fight-or-flight. I had taken time off social, hired a spiritual coach and smoked a Bufo toad (which basically reset my brain and kicked out years of anxiety in 15 mins),” Haack explained. “When we met this past spring, the synchronicities hit us so hard and fast they were impossible to ignore. I felt immediately crazy protective over him and wanted to keep him for myself and get to know each other before the tornado (media attention) hit.”

“We’ve had a few solid months of just us getting to know each other and I’ve loved every second of it. So called ‘fame’ provides so many things, but it comes with a cost. They build you up then tear you down,” she added. “When I saw a camera behind us at the airport my heart started beating out of my chest and my hands shaking — and not for me but for him. I know they dig and dig and I didn’t ever want to see him stress over the media stalking him and his family. Which obviously has already begun to an uncomfortable degree.”

Haack continued on, telling fans that she and her new beau have decided “what’s in the past, is in the past,” and neither of them are “looking at all the nonsense online.”

“The internet and social are great for businesses or staying up to date on fam / friends but also, can be toxic and (let’s be real) pretty fake,” she said. “I may be a bit crazy and I’m definitely not perfect but I will never live my life based on other people’s judgments or opinions.”

“We pride ourselves on never judging others and always wanting others to be happy and we wish others would have the same respect,” she urged. “Josh doesn’t have social media, but I want to thank him for whisking me away on a romantic tropical vacation he planned entirely on his own. ❤️✈️ So yes ‘another relationship’ and guess what. I’m 38 — I’ll do what I want.”

Just last month, Haack spoke to ET about how she was moving forward following her split from Ant Anstead. The two finalized their divorce in June and share one child together, 1-year-old son Hudson. Haack also shares 10-year-old daughter Taylor and 5-year-old son Brayden with ex-husband Tarek El Moussa.

“I feel like right now… there’s so much going on with work and the kids, so focusing on the kids and work and just having fun,” Haack told ET at the time. “My goal is just to move on and not take things so seriously. And do some fun trips with the kids, go to Tennessee more, take time for quiet time and just really focus on the family. Just those things for us, those private times, you know, fun moments.”

“I’m more of a person that just focuses on staying positive. Like, I don’t get stuck in dwelling on things if they’re going differently,” she continued. “I just always constantly am looking at the future. New projects, new fun activities and everything like that. I guess the main thing is, yeah, just not getting stuck in the setback and just looking at the future.”

Anstead, meanwhile, has also been making headlines lately, after he was spotted out and about with Renée Zellweger multiple times over the past month.

The two have yet to publicly confirm the relationship themselves, but recent pics of them packing on the PDA during a bike ride in Laguna Beach, California, seemingly prove they’re more than just friends.

Hear more in the video below.