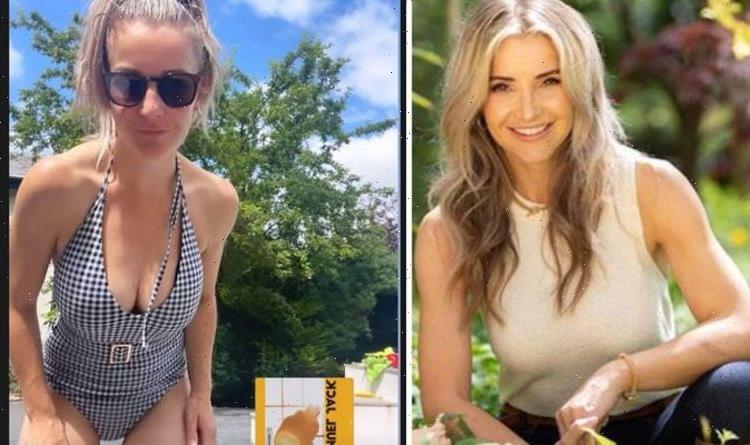 Helen Skelton stuns in denim on Summer On The Farm

This Week On The Farm presenter Helen Skelton, 37, has put on an eye-popping display on her Instagram account, as she donned a swimsuit to enjoy the warm British summer. Making the most of the heatwave, the former Blue Peter presenter snapped a picture of herself as she made the most of the day in the sun with her children.

It doesn’t bother me what some random person I’m never going to meet thinks about my skirt!

Revealing that she’d spent the day enjoying the sunshine with her two sons, the star documented her day by the pool on social media,

Wearing a figure-hugging black and white gingham print swimsuit, the Countryfile wore her hair in a high ponytail and accessorised with a pair of timeless black sunglasses.

The halter neck style of the costume hugged her petite frame in all the right places as the golden buckle served to cinch her waist, resulting in an incredible hourglass silhouette.

Last week, the star spent quality time with her husband Richie Myler and two sons in her garden as she soaked up the sun by the pool.

The Countryfile star admitted that she doesn’t get too “hung up” on the negative comments she receives.

It comes after the TV presenter faced backlash for her outfit choices while presenting the Olympic Games coverage in Rio de Janeiro in 2016.

She came under-fire for wearing a short skirt while fronting the swimming events.

While some were left enraged by Helen’s outfit choice, she has since admitted that social media abuse now goes over her head.

However, Helen doesn’t let the comments affect what she wears and what she shares online.

In a new interview, she said: “Maybe I’m too needy but no I don’t [worry], I know it sounds stupid but I don’t have time for that.”

“I’ll maybe put a picture on but I don’t have time to go through the comments — don’t get me wrong I love social media.

“But I don’t get too hung up on comments because I don’t think the whole world is reflected on social media,” she told The Sun.

“It doesn’t bother me what some random person I’m never going to meet thinks about my skirt!” Helen continued.

While Helen isn’t affected by trolls, she revealed that she often thinks carefully about what aspects of her personal life she shares on social media.

“I think everybody wrestles with the Insta thing, I mean I regularly think ‘Oh I’m not going to put pictures of the kids on’ but then I just really like that picture so I put it on,” she explained.

Helen has previously admitted to not searching for herself on search engines such as Google after “reading too much into herself”.

The presenter was left gobsmacked when she discovered her “northern dairy farmer” dad was a guest on This Morning, discussing her wardrobe choice at the Olympics.

At the time, Helen told the MailOnline: “I get more press and headlines about a pair of shorts than anything else I’ve done, it’s just funny.”