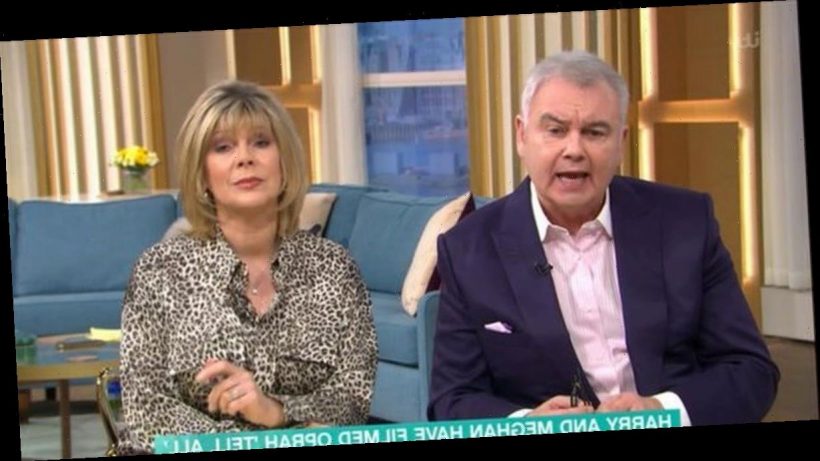 Eamonn Holmes has hit out at the Duke and Duchess of Sussex's upcoming "tell-all" interview with Oprah Winfrey.

Meghan Markle, 39, and 36 year old Prince Harry are due to speak to the famous American talk show host for a 90-minute special about everything from their royal exit to their recent baby news.

Eamonn, who was recently accused of "fat-shaming" his wife Ruth Langsford, voiced his opinion about the CBS special while presenting the This Morning show with his other half on 16 February.

As the 61 year old TV presenter and Ruth, 60, spoke to royal correspondent Camilla Tominey and Nick Ferarri about the news, he blatantly branded the Oprah interview as an "advert".

"Well, it's not an interview really, is it? It's an ad, really," Eamonn quipped.

He continued: "I mean, Oprah's a mate, Oprah was at her wedding. Meghan's mum stayed with Oprah at her home as a house guest. So it's not an interview as such, Camilla?"

Camilla replied: "Well, I don't think she's going to be throwing really difficult questions at Meghan and admittedly it's going to be hugely sympathetic because, as you say, they're friends.

"Though interestingly, it's been pointed out that they'd only met once before Oprah turned up at the royal wedding in Windsor castle in May 2018. But yes, I think it's going to be a soft soap kind of an interview."

It comes as it was recently reported that Meghan and Harry, who are parents to one year old Archie, could lose their royal patronages due to their upcoming interview with 67 year old Oprah.

Meghan and Harry’s latest move is said to have caused a “great deal of nervousness”.

One royal source told Mirror: “One only has to look at the previous instalments of the tell-all interview to know these things never end up with a wholly positive experience for any party.

“Everyone will be watching with intense interest.”

It could mean that Meghan and Prince Harry, who were slammed by Piers Morgan over their “cheesy” pregnancy announcement, have “no way back to their official royal duties”.

The Queen could ask the couple to “relinquish their links” with any organisations passed down through the Royal Family.

Prince Harry could be stripped of his three remaining honorary military titles and, potentially, his patronages with the Rugby Football Union, Rugby Football League and the London Marathon, Daily Mail has reported.

Meanwhile, Meghan may be asked to step down as patron of the National Theatre, a role which she was handed in 2019 by The Queen, who had been a patron of the institution for 45 years.

One royal source told the publication that as Meghan and Harry are no longer working royals, any decision taken with regard to “media commitments are matters for them”. They were “under no obligation” to inform the Royal Household of their plans.

Another insider described the interview as “one of the most inevitable and, sadly, predictable consequences” of Megxit.

OK! online has contacted representatives for Buckingham Palace and Meghan Markle and Prince Harry for comment.