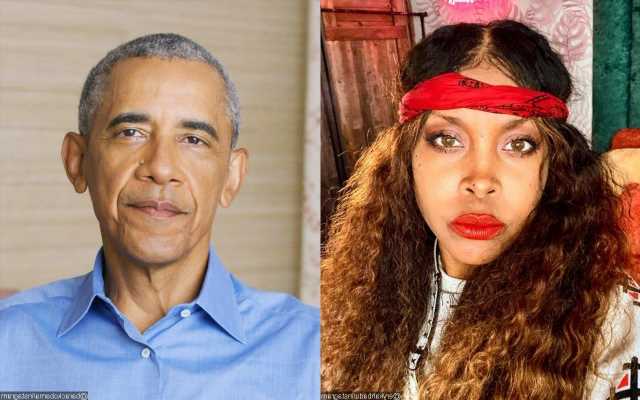 In the since-deleted video, the former U.S. President could be seen dancing without any mask or face cover on with the guests during his private party which was held at Martha’s Vineyard.

AceShowbiz –Erykah Badu has issued an apology to Barack Obama and Michele Obama. In her apology note, the “Next Lifetime” singer dubbed herself a “terrible guest” for sharing a video from the former president’s birthday party.

On Thursday, August 12, the Grammy-winning singer took to her Twitter account to issue an apology to the Obamas. “Mr. And Mrs. Obama , Please forgive me 4 being the ‘terrible guest’ at such a sacred event for your family,” the 50-year-old singer began her statement. She then continued, “I was so inconsiderate, Thank you for all your love. What an example of ‘how NOT’ to be …… erica.”

Erykah Badu apologized to Barack Obama and Michele Obama for sharing a video of the private party.

Previously, Badu posted and deleted a video of Obama dancing at his 60th birthday bash on Saturday as the event organizers issued a strict “no photography” rule for the private party. In the said clip, the former president was seen dancing without a face covering on, though he provided custom black masks for the guests, during the event which was held at his 29-acre estate in Martha’s Vineyard, Massachusetts.

However, Badu wasn’t the only guest to break the protocol. Rapper Trap Beckham and his manager TJ Chapman also shared images from the event. “Had to delete everything due to the rules. It was epic for sure. If any videos surface, it’s going viral. He danced the whole time. Nobody has ever seen Obama like this before,” the 30-year-old rapper, whose real name is Travis Cave, told the New York Post before Badu’s video was uploaded.

During the birthday party, Obama was said to have “a great time.” A source told PEOPLE that the former president “danced all night” and “never stopped smiling” at the outdoor gathering of about 200 family members and close friends. The insider went on, “Literally, every time I saw him, he had the biggest smile.”

For the special occasion, Obama dressed in a light gray, floral button-down shirt with the sleeves cuffed, completed with white pants and a festive, black beaded necklace. In the meantime, his wife looked dazzling in a green halterneck dress, which she accessorized with gold jewelry.