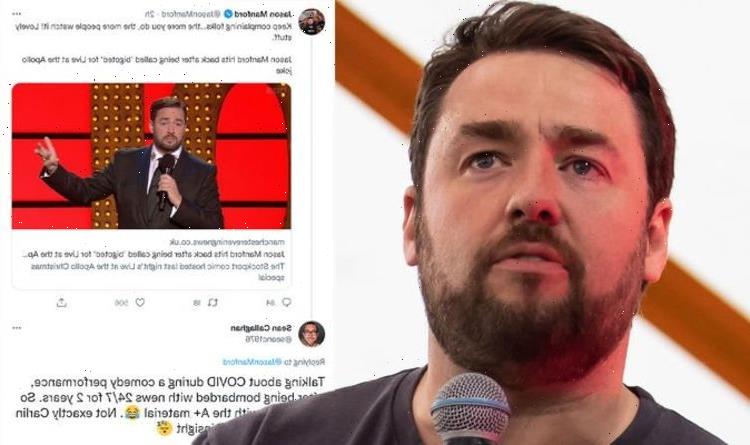 Jason Manford, 40, took to Twitter earlier this evening to laugh off an accusation he’s “bigoted” after talking about anti-maskers at the Live at the Apollo Christmas special. In response, one social media user commented telling Jason that his Covid content isn’t “A+ material” leading Jason to hit back.

Jason responded to a news article on Twitter in view of his 399,100 followers where he laughed off being called “bigoted” for his Covid comedy content.

Sharing the article, Jason posted the caption: “Keep complaining folks… the more you do, the more people watch it! Lovely stuff.”

Seanc1976 wrote in response: “‘Jokes’. So stunning and brave to talk about a virus that we’ve heard nothing else for 2 years.

“The biggest thing to happen in our lifetime, I’m pretty sure it’s exactly what George Carlin would be talking about and people like you would be the butt.” (sic)

Many social media users took to the comments to wade in on the Covid row.

Original kitten added: “They’d be the first ones to call us snowflakes.”

Seanc1976 couldn’t help but respond to Jason, penning: “Maybe, but he wasn’t exactly conventional Jason so he might have been bored with it like the rest of us.

“Low hanging fruit wasn’t really hit style though was it.”

This all comes after Jason hosted last night’s Live at the Apollo Christmas special on the BBC.

He ruffled feathers when he told a joke about medics and scientists around the world saying Covid was dangerous while “your brother’s friend from the gym says it isn’t”.

He joked: “It happened to me in the middle of the pandemic. I was walking in my village and my brother’s mate from the gym, Dean, saw me.

“‘Hey Jay, alright mate. I see you’re wearing your mask, like a sheep’.

“‘What are you wearing that for, mate? They don’t do nowt.’

“I said, ‘Well I don’t know if I’m honest, Dean. I just figure if I’m wrong, I just accidentally wore a mask for a year. Whereas if you’re wrong, someone’s nana died’.”

After the show, Milesy tweeted: “How on earth is this considered comedy? Manford claims not wearing a mask could kill someone’s nan. What an absolute moron.”

And Wez posted: “Your radio show is funny but the Apollo was woeful, bigoted views about people you don’t know for a few claps (not laughs) from the audience. Stick to absolute radio.” (sic)

Manford also divided opinion when joked he feared being “cancelled” because he thinks Christmas dinners are “s***”.