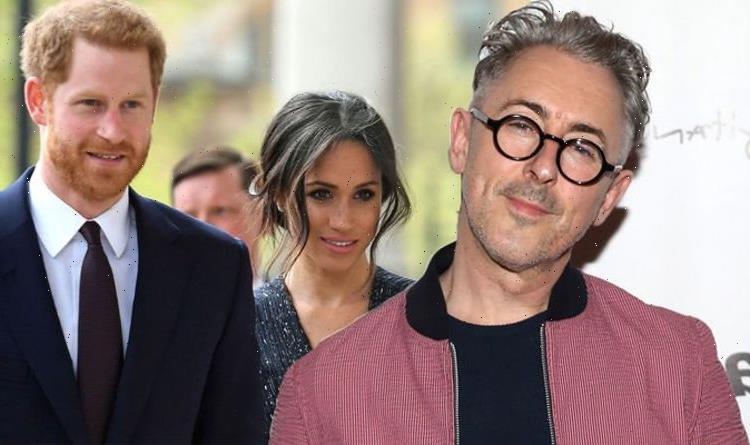 Alan has never met Meghan or Prince Harry but fully supports their decision to leave the UK and move to Los Angeles after stepping down as senior royal members.

He shared how he really admires them for “removing themselves from a situation which they found abusive, not just keeping their heads down and staying in ‘The Firm’ and being bullied, which they obviously were.

“I absolutely have sympathy for them,” he added while talking to The Telegraph.

The multi-talented Alan won an Olivier in his twenties, played a Bond baddie in GoldenEye and performed a one-man Macbeth on Broadway.

He is now appearing in the controversial animated satire The Prince on HBO, in which eight-year-old Prince George is portrayed as a spoilt snob, The Queen drops F-bombs, and Prince Philip is a sort of walking cadaver.

Alan, who received an OBE at Buckingham Palace in 2009 from the Princess Royal, voices Prince George’s butler.

Does he think the Royal Family will see the funny side? “I don’t know,” he said.

“If they appreciate satire, they might… It’s quite tender, actually – my character with George, it’s a really lovely relationship. It’s not as mean as people think.”

The show’s 12 episodes are in cartoon form but have attracted negative publicity for their portrayal of the late Prince Philip, and his failing health before his death.

Orlando Bloom’s Prince Harry savagely mocked the real-life Duke in scenes centred on the lifestyle the dad of two left behind in the UK.

However, the Canterbury-born star has now insisted the controversial episodes are, in fact, “showing real adoration” for the Royals.

In an interview with the Hollywood Reporter, Orlando said: “I hadn’t met [Prince Harry] when I signed up to do it, and I subsequently met him and he’s such a nice guy.

“This guy is so nice, and I think he’s got a great sense of humour.

“I hope he maintains that through this because they’re sort of on a pedestal.

“We’re showing real adoration to them in one form or another. I try to justify it, because quite frankly, if I’m honest, it’s not like me to poke fun at anyone but it is done with affection.

“When I was in my mid-20s, there were so many different people poking fun at me and, in a way, it’s a sign of appreciation.”

At the time, creator Gary said: “We were saddened to learn of Prince Philip’s passing and will adjust plans for the series debut.

“A new date will be announced at a later time.”

The series became available to stream from July 29 on HBO Max in the US after being delayed from May.

A UK channel and air date have not yet been announced.