The first Shondaland project in Shonda Rhimes’ mega-deal with Netflix burst on the scene on Christmas Day 2020, when the Regency-era drama series Bridgerton hit the streaming service. With a story mixing Jane Austen, Gossip Girl and the lush looks of London (and its aristocratic denizens) circa 1813 combined with a strong, multi-racial cast and contemporary storytelling, it quickly found a place in the zeitgeist, shattering Netflix’s viewership records with 82 million households around the world watching the first season in the first four weeks.

The series was produced by Rhimes and created by her Scandal compatriot Chris Van Dusen based on Julia Quinn’s bestselling romance novel series. Van Dusen kicked it all off on Netflix with the Season 1, Episode 1 script, titled “Diamond of the First Water,” launching the tale of the Bridgerton and Featherington families (and of course Regé-Jean Page’s Duke of Hastings) who quite literally duke it out during debutante season, all via play-by-play from the mysterious Lady Whistledown.

“I’ve always loved a period piece and I’ve always loved the genre,” Van Dusen told Deadline during the series’ Contenders TV panel. “But I think they are considered a little conservative and a little traditional, and I knew from the beginning that I never wanted Bridgerton to be that way. We really worked to tell these stories and explore these characters through a really contemporary lens. … It is set in the 19th century but you sometimes forget that because what we are exploring is really modern and it’s really universal.”

The philosophy worked. Season 1 picked up SAG Award ensemble and PGA Award noms, and won an AFI Award ahead of its Emmy campaign. Page, meanwhile, landed a SAG nom and won the Image Award for outstanding actor in a drama series. Netflix meanwhile, quickly made a deal for three more seasons (Van Dusen will showrun Season 2, with Jess Brownell taking over for Seasons 3-4), as well as a limited prequel series based on the origins of Queen Charlotte that will be written by Rhimes.

But first was “Diamond of the First Water,” which becomes the latest to be featured in Deadline’s It Starts On the Page, a series that highlights the scripts that will serve as the creative backbones of the now-underway TV awards season. The scripts are all being submitted for Emmy consideration this year and have been selected using criteria that includes critical acclaim, a range of networks and platforms, and a mix of established and lesser-known shows. 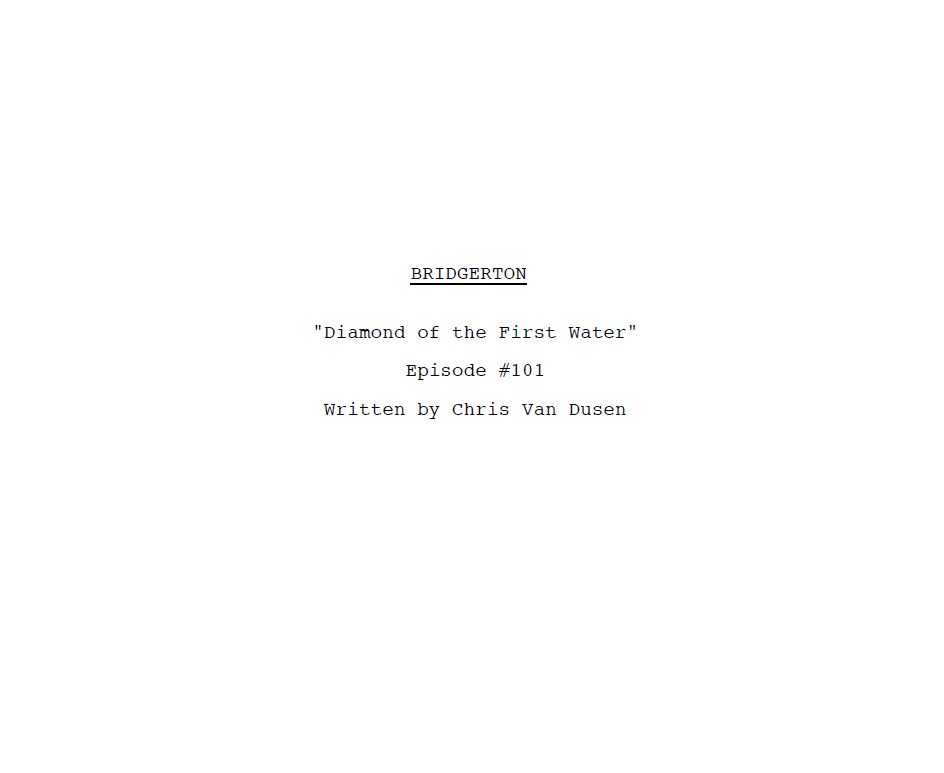 It Starts On The Page

It Starts On The Page: Read The Script For Eugene Ashe’s Romance Movie ‘Sylvie’s Love’

It Starts On The Page: Read The Script For The Season 2 Premiere Of ‘Mythic Quest’

It Starts On The Page: Read A Script From Season 2 Of ‘Everything’s Gonna Be Okay’ By Allison Lyman & Creator Josh Thomas