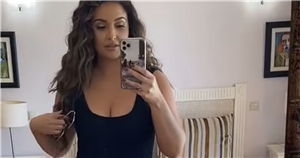 TV stars Amanda Holden and Jacqueline Jossa have been enjoying the gorgeous sunny weather in Portugal over the last week.

However, their holiday has been plunged into disaster as it's now been announced the country has been taken off the government green list.

The summer hotspot has been a lifesaver for those who've been vaccinated or needed some time outside of the UK after the last year and a half under constant lockdown restrictions amid the ongoing pandemic.

Jacqueline managed to mix work with pleasure as she whisked her daughters Ella, six, and two year old Mia away to Portugal with her as she worked on her new In The Style campaign.

The 28 year old has been shooting content for the launch of her swimwear collection with the retail giants and has been flaunting the collection as well as her holiday across social media.

Meanwhile Amanda recently took to her own Instagram account to share a stunning snap of herself wearing nothing but a white bikini, showing off her incredible figure and glowing skin.

The mum-of-two, 50, appeared to take her family alongside her for the fun week away as she later shared a snap of her lookalike daughter Lexi.

However, the growing number of Covid-19 cases in the country has meant the government has had no choice but to downgrade Portugal to the amber list, according to Sky News.

It is said the change is expected to come in on Tuesday 8 June, which means anyone travelling back from within Portugal to the UK after that will have to adhere to strict measures.

While those returning from a green-listed destination don't need to isolate, Amanda and Jacqueline will have to go into quarantine for a period of 10 days if they come back home after next Tuesday.

The pair will, however, be able to reduce the isolation period if they receive a negative result from a test taken at least five days after their arrival.

They will also be required to take a pre-departure test and a PCR test on day two and day eight of their arrival back in the UK.

Amanda and Jacqueline are not the only stars who opted to go abroad to Portugal recently as former glamour model Katie Price, 42, was quick to book a flight out for her second trip to the sunny destination with her fiancé Carl Woods, where they stayed in a £365 a night villa.

Soap stars in the news

Clearly having a grand time there, Katie and her 32 year old former Love Islander other half documented their stay as they enjoyed movie nights, the BBQ and a relaxing time by the dreamy swimming pool.

Luckily, it appears the couple returned home before any mention of the country being moved to the amber list as a MirrorOnline reported her representative confirmed they are back in the UK.