Jennifer Lopez stopped to thank some of our soldiers guarding Washington D.C. ahead of her big  performance at Joe Biden’s inauguration. The superstar took sweet selfies with the military heroes protecting the U.S. Capitol.

With so many soldiers and national guardspeople from across the country called up to help protect Washington D.C. from any potential Pro-Donald Trump riots, violence or insurrection attempts during Joe Biden‘s inauguration on Jan. 20, six members got a special treat in the form of a selfie with Jennifer Lopez! The superstar is in town to perform at the ceremony, and stopped to pose for photos with a group of soldiers protecting the U.S. Capitol building. JLo shared a video of the sweet moment to her Instagram account on Jan. 19.

The 51-year-old looked stunning in a black and white houndstooth coat, with her long bronde tresses glowing on her shoulders thanks to the setting sun. Even with a black face mask, Jennifer’s gorgeous brown eyes with her long, thick lashes were so recognizable.

Jen bent her knees slightly to get everyone in the shot, with four taller male soldiers in the back and two female soldiers next to the “Dinero” singer. “Are we all in?” Jennifer asked, as the well-mannered guardswoman next to her replied “Yes ma’am.” Jennifer took several shots and tilted her head slightly to the side to make them all a little different before handing the phone back to one of the women.

“What an honor to spend a few moments with these brave men and women. Thank you for your service and sacrifice. I honor you today and everyday. Tomorrow I sing for you and all Americans. #inauguration2021,” Jennifer captioned the video. She had flown into D.C. earlier in the day, posting a photo in the morning to her social media with the caption “DC bound.”

While Lady Gaga will be singing the National Anthem at the inauguration ceremony, it’s unclear what Jennifer will be performing. Her fiance Alex Rodriguez has said that JLo is more nervous than when she performed at the Super Bowl halftime show in 2020, because of the heightened sense of “responsibility” that comes with performing at a presidential inauguration. 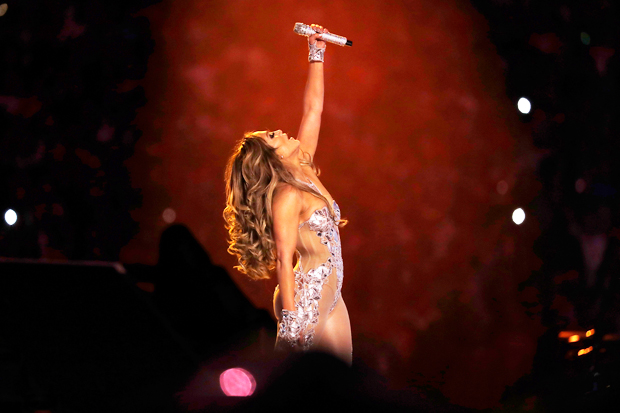 Alex told Jimmy Fallon on Jan. 18 Tonight Show that “It’s been such a crazy year for her, so amazing, so many blessings. But to think in a span of 12 months, she’s done the Super Bowl, New Year’s [Eve] and now the inaugural, it’s unbelievable,” he began.

“What’s interesting is she’s most nervous about Washington D.C. because of the responsibility,” he said. “She wants more than anything, like all of us, to bring people together, to inspire. Music and sports does that better than anything.” While he didn’t give out any details about what Jennifer will be performing, A-Rod teased “She has something really cool [planned]. You’re going to be surprised. You’re gonna love it.”

Jennifer isn’t the only celeb who is saying thanks to our soldiers through posing for photos. John Legend will be performing at an evening event after the inauguration called Celebrating America, to honor American heroes. The 42-year-old crooner and his wife Chrissy Teigen posed with a group of soliders while on their way to a soundcheck. The 35-year-old Twitter-loving cookbook author shared a photo in a tweet of the couple, surrounded by soldiers on both sides. Chrissy wrote, “lmao we got lost on the way to soundcheck but I just got to meet these f**king actual heroes.”