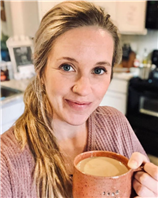 In a manner of speaking, that is.

The former reality star uploaded a photo of her baby bump to Instagram, writing as a caption:

“I was to that point…when you’ve waited just a little too late in the pregnancy and the button hole/rubber-band & belly-band trick just isn’t cutting it anymore!”

We say this to now say the following:

Jill Duggar appears to no longer want her social media followers to see either of her first two kids, Samuel and Israel.

Over her past couple posts, the expecting mother has taken an unusual tact when writing about her family: She hasn’t let anyone actually get a glimpse its youngest members.

“The boys were SOOO excited to have their first swim lessons today,” wrote Jill as a caption to the snapshot immediately above.

Of course, we can’t make out any excitement from the back of these heads.

On April 8, meanwhile, Duggar shared the image below and paid tribute to her oldest childd as follows:

“I’m a little late in posting this, but didn’t want to miss the opportunity to wish our basketball loving firstborn a very happy 7th birthday! Happy birthday Israel!!”

Jill added a picture of her kids eating lunch and continued:

“We got to have a taco bell lunch together at school on his birthday, then we went to ride go karts (for the first time ever!) with Uncle @jamesaduggar.”

In this case, Duggar went out of her way to wait until her sons had their faces covered before the actually snapped the photo.

Jill’s effed up extended family has partly made a living out of getting pregnant and shoving their young children in front of the camera and exploiting their whole sexist and close-minded religion.

Not Jill, however. Not anymore, at least.

This is someone who has openly rebelled against parents Jim Bob and Michelle for about two years now.

Jill may simply be taking the step of removing her sons from the public eye, a move for which we applaud her.

“There’s been some distancing there,” Jill confessed in an October 2020 video, adding of her famous parents, brothers and sisters:

“We’re not on the best terms with some of my family.

“We’ve had some disagreements, but we’re working towards healing definitely and restoration, but we’re having to kind of just take some time and heal.”

She’s become the most outspoken against her mother and father by far, clearly taking her husband’s side in Derick’s never-ending feud with Jim Bob.

“We’re doing what’s best for our family right now and just working through, it I guess,” Jill continued on this subject back then.

“We are praying and trusting God that like the timeline is his and what that looks like and everything.

“So we definitely appreciate your prayers, and we don’t want to go into detail.”