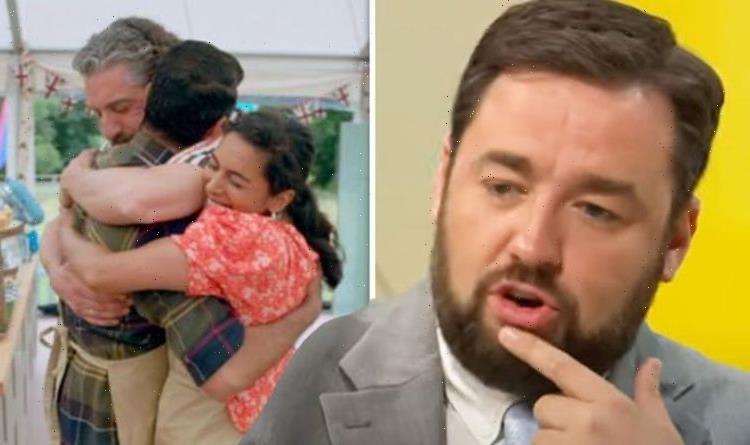 Comic Jason Manford, 40, took to Twitter and joked that the Great British Bake Off victory was a “joy Brits can only dream of” after the Channel 4 programme declared tonight’s champion. Giuseppe Dell’Anno, 45, an engineer who lives in Bristol, was crowned the series winner.

While viewers shared their delight over the news, Jason took to the micro-blogging site and reacted to the baker’s victory.

The comedian joked that Britons were on a losing streak in a number of competitions against their European counterparts.

But some viewers were unhappy with Jason sharing details of the winner as they hadn’t yet watched the programme.

In view of his 395,000 followers, he penned: “First the Euros and now Great British Bake Off! Italians are smashing us this year!”

The British comic responded: “Ah man! What must it feel like to be Italian atm [at the minute]. Joy we Brits can only dream of!”

The person in question fumed over the comedian’s “spoiler” after sharing news of the winner minutes after the Channel 4 show ended.

Jason fired back: “Well get off Twitter ya lemon! Has nobody seen The Likely Lads! #SpoilerAlert.”(sic)

Lee Emmans cheekily vented: “You a***! Sky let us down and not recorded so watching on plus 1. Lost its suspense a little now.”

“Imagine not wanting to know the result of something and then coming on social media!”

Meanwhile, Giuseppe took to Instagram and thanked fans for their support after being crowned the winner of Bake Off.

He had impressed judges throughout the competition with his elegant baking and precision-engineered bakes, with an added sprinkle of Italian flair.

In view of his 81,500 followers, he penned: “You think you know what you’re getting yourself into when you sign up… it’s a physically, psychologically and emotionally draining experience.

“But also exciting and exhilarating. And I could have never done it without the support of my wife, my fellow bakers and the constant support from the production team!

“Thank you all out there, for reaching out and showering me with love! I will be forever grateful!”