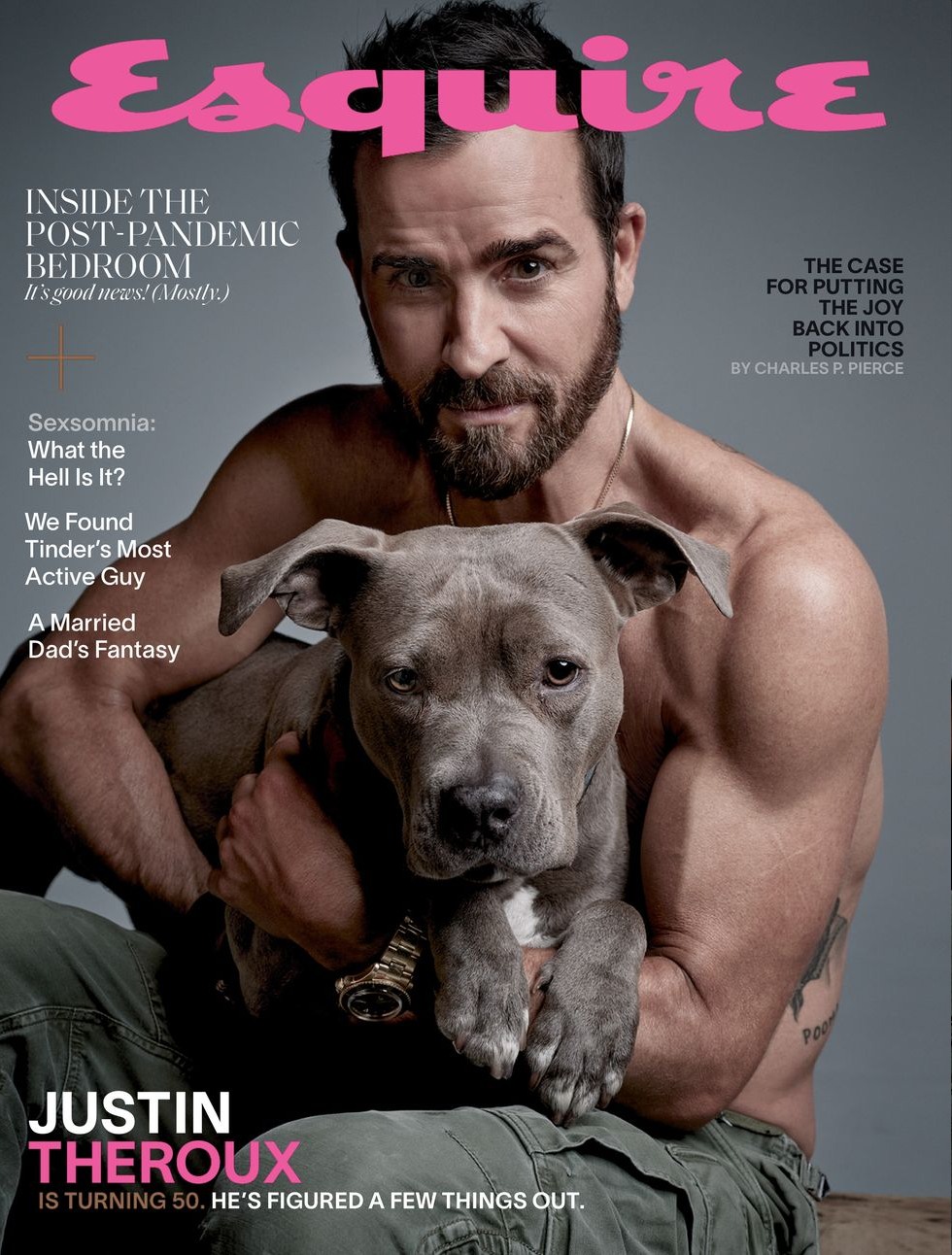 While I came out of Justin Theroux’s Esquire cover profile with some respect for the man, I burst out laughing as soon as I saw this cover. The arms and the dog – it’s like he’s trying to thirst-trap on the cover of a men’s magazine. Literally a weird flex, but okay. Justin covers Esquire because he’s promoting his new series, The Mosquito Coast on Apple+. In the first half of the interview, the journalist presses Justin with questions about Jennifer Aniston, and this is three years after they officially split. Esquire uses words like “marriage” and “wife” and “divorce” – Justin does not. Which, again, is notable to me because they didn’t actually get a divorce because they were never legally married. They just lied about it for several years and no one is supposed to say that. Justin talks about other stuff in the interview too, it isn’t just about him dodging Aniston questions – you can read the full piece here. Some highlights:

How he spent his pandemic: Theroux returned to NYC and began stockpiling for his pod of one. (Two, if you count Kuma, his pit bull terrier.) He bought bone broth by the bucket; he hoarded garlic, ginger, and, for some reason, Parmesan cheese. “Perhaps I was being paranoid,” he says. Like everyone else, he couldn’t find toilet paper, but unlike the rest of us, he didn’t need it. “I have a Toto, thank God,” he says, referring to his heated, bidet-rigged Japanese toilet.

He’s looking forward to dating post-pandemic: “I don’t want to become a hermit. At all. What I’m most thirsty for now is friendship. Once that’s up and running, I’ll start thinking about the other stuff.” By “the other stuff,” he means romance. Officially, he is single, and has been since he and Jennifer Aniston divorced in 2018. Before they got together in 2011, he was in a relationship for fourteen years with the stylist Heidi Bivens. This is the first time, in other words, that Justin Theroux has been single since the Clinton administration.

He hasn’t had many dating opportunities post-Aniston: “All the avenues to dating are completely shut.” He doesn’t use dating apps. “Never.” Nor has he slid into someone’s DMs; he says he’s unaware of anyone who’s slid into his. “Sounds a little old-fashioned, but I actually like to get to know someone. That’s the fun of meeting people. Sussing them out and playing . . . not games, but — It all sounds predatory when I say it. The strategy. The game. There’s only one pivotal relationship in my life. My mom.”

Whether he & Aniston split because she wanted to live in LA & he wanted to live in NYC: “That’s a narrative that is not true, for the most part. Look, people create narratives that make themselves feel better or simplify things for them. That whole ‘This person likes rock ’n’ roll, that person likes jazz. Of course!’ That’s just not the case. It’s an oversimplification.”

Whether he’s still close to Aniston: “I would say we’ve remained friends… We don’t talk every day, but we call each other. We FaceTime. We text…Like it or not, we didn’t have that dramatic split, and we love each other. I’m sincere when I say that I cherish our friendship. We can not be together and still bring each other joy and friendship. Also, she makes me laugh very, very hard. She’s a hilarious person. It would be a loss if we weren’t in contact, for me personally. And I’d like to think the same for her…. I think that when you get good at relationships—and here I am, single—if you love the person the same way you loved them in the relationship, it would behoove you to love them the same way out of the relationship. Who wants to take a sh-t while you’re walking out the door?”

Whether he wants kids: “I don’t feel that compulsion. I don’t have a resistance to it, but I don’t have an eagerness for it. As for wanting to continue the family line, there are plenty of Therouxs in the world who can do that for me. They’re doing a great job popping out kids. It would be kind of great if I got a knock on the door and someone said, ‘Hey, I’m your sixteen-year-old kid.’ I’d be like, ‘Oh my God, it’s amazing.’ ”

His mother’s second husband died last year, during the pandemic: “It was an added level of grief that was heartbreaking for me to witness. To have her house be vacant, and to not have the rituals and the support systems that normally would sweep through it, with love, and food, and company—it was just terrible.”

He spoke at length – and quite emotionally – about checking in with his widowed mom every day and how difficult it was to see her grieve so profoundly for her husband. He’s a mama’s boy, which I never realized, but he’s not creepy about it. He genuinely came across as a middle-aged guy trying to navigate caring for an elderly parent, specifically for a widowed mother’s mental health. He also sounds like he’s trying to figure out his romantic life post-Aniston and post-Heidi Bivens, and he says at one point “The only relationship where I think codependency should be totally encouraged is with a dog.” As for all of the Aniston stuff… I get the feeling that there really isn’t some big drama between them, that despite his “oversimplification” claims, their fake marriage was mostly just convenience and a professional move for him, and they got fake-divorced because he really did want to live in New York and she didn’t.

Cover and IG courtesy of Esquire.