Summer szn is well on its way and despite this indecisive British weather of ours *rolls eyes*, we’re preparing for a garden party-filled next few months. And so, with Aperol spritzes and plenty of Cosmopolitan (see what I did there) on the agenda, it’s only fair that we prepare a few beauty looks. Thankfully, it’s not only Anne Hathaway who has us covered in the hair department, but also the Duchess of Cambridge.

For the Queen’s Royal Garden Party, which took place at Buckingham Palace just yesterday, Kate Middleton wore a hairstyle that has landed itself at the very top of our metaphorical hairspo files (although, I am working on an IRL folder, I promise…). Not only is she sporting her signature bouncy curls, but K-Mid is rocking the half-up half-down look. It’s the perfect summer style for keeping the hair out of your face when it’s hot whilst also looking oh-so-put-together.

Although it’s not quite a sky-high Ariana Grande classic *collective sign*, Kate has instead put a twist (quite literally) on the half-up look *revoking sigh*. Take a peek at her ‘do from behind: 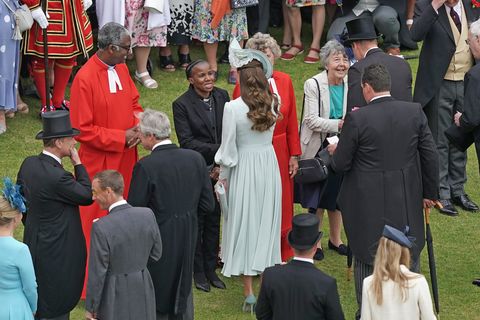 Despite the fact that the Duchess is wearing a pretty big fascinator, we can see that the front pieces of her hair have been pulled back and pinned behind her head. Plus, just look at those gorgeous bouncy curls. 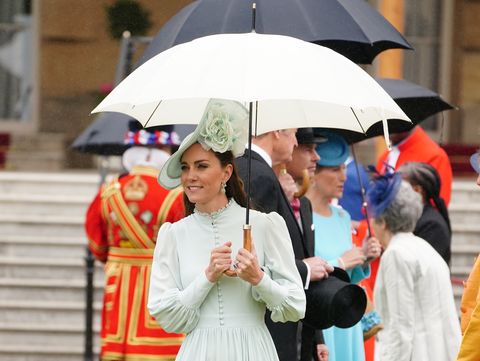 And whilst Kate’s hair is a masterpiece in itself, we also have to take a ‘mo to appreciate the reunion that occurred between her and an old friend – a major talking point of the event. Kate shared a special moment with Holocaust survivor Manfred Goldberg, 92, who she has previously met before on two separate occasions. See a snap of their sweet interaction below. 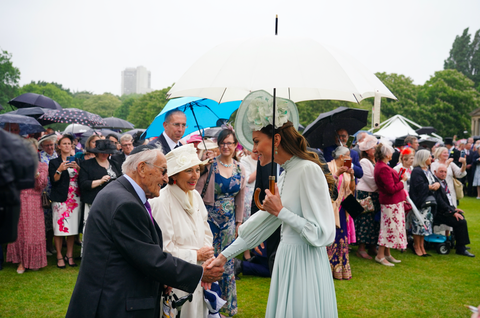