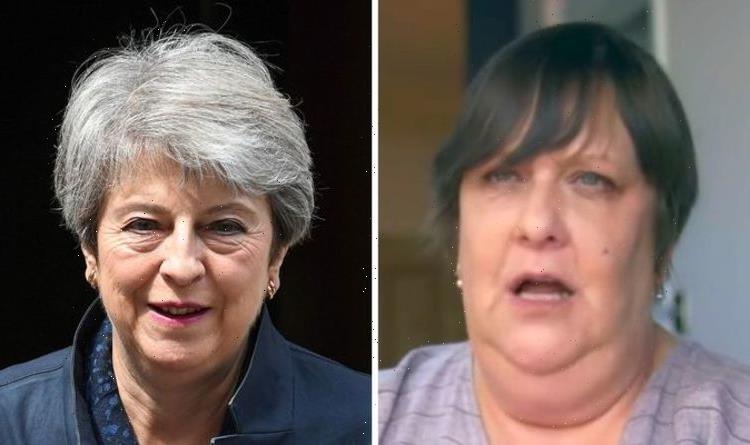 The actress is known for her no-nonsense, direct style perfectly outlined in her Channel 4 series, ‘Kathy Burke’s All Woman’. It was here that she travelled around the UK talking to “all kinds of people”, exploring what it means to be a woman in the 21st century. Following a similar formula, she will now grace screens with her ‘Money Talks’ series, which sees Burke poke her nose through the doors of some of the county’s richest – and poorest – homes, and follow people’s daily lives.

It has been noted that she wants to “start a debate” on the subject of money, promising to be full of her “good natured bluntness” and willingness to ask awkward questions in off-key situations.

The same might be said of her opinions on the UK’s political figures and modern-day, social issues.

In an interview with The Guardian in 2019, she hit out at people who had praised Theresa May as having done a good job as Prime Minister because she was a woman.

Asked whether she had any respect for Mrs May “as a woman holding the country’s highest office”, Ms Burke responded decidedly: “I think that’s crap.”

She continued: “If we want equality, we shouldn’t then expect to be praised just because we’re doing a certain job.

“That’s not equality. Equality is acknowledging that she did a s*** job.”

It was around this time that Mrs May announced she would be standing down as Prime Minister after a tumultuous three years.

Her negotiations with the EU had been unsuccessful and she had come up against a wave of dissent within her party.

Asked who she would theoretically vote for, Ms Burke said: “I’d probably go Green because I am really worried about climate change and the planet.

“I’ve been a Labour voter all my life.

“But I don’t know how I feel about things at the moment, quite honestly.”

In relation to the economy, she continued: “The whole thing is a terrible mess.

“I really feel for young people, I don’t know what they’re going to do.

“Especially living in London, they can’t afford a place to live and they won’t be able to afford to eat soon.

“Look at Hoxton [in east London].

“Hoxton was a s***hole, and now it costs a fortune to live in someone’s bin shed.”

While many look forward to her newest broadcast venture, others are less sure.

Lucy Mangan, writing in The Guardian, said there is a “danger that the powers that be are trying to turn Kathy Burke into the working-class Miriam Margolyes”.

She said that the programme is too similar to Ms Burke’s ‘All Woman’ and as a result “reproduces the same weaknesses”.

She commended Ms Burke for not “scoffing at the ostentatiousness” of her subjects’ mansions and belongings.

Writing in The Daily Telegraph, she said: “She was similarly broad-minded when listening to Megan Barton-Hanson, a former Love Island contestant, explain that she can make at least £20,000 a week selling access to ‘intimate’ photographs of herself on the OnlyFans website.

“Nor did she have a problem with the young TikTok influencers who claimed to be making up to £150,000 a year through endorsement deals by producing brain-deadening video content (sample: a girl sitting in a bath of milk with some rose petals in it), although she did note that their mansion was rented and they were selling a fantasy lifestyle.”

You can stream ‘Kathy Burke: Money Talks’ on All4.