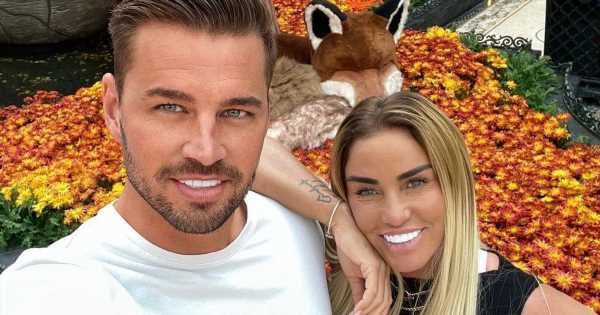 Katie Priceand Carl Woods are said to be “desperate” to have their tattoos of each other removed in wake of them calling off their engagement.

The pair got engaged in April 2021, but have since gone their separate ways after Katie, 43, allegedly got in touch with her ex Kris Boyson – who has apparently told the former glamour model thatthere’s no chance of them getting back together.

Before their split, Katie got a tattoo of Carl’s face on her arm, while he also got one of Katie’s face on his.

Carl, 35, insisted at the time that the ink was “more than a tattoo – it's a tribute to each other”.

In the wake of their split, they’re now hoping to have them removed as soon as possible.

"After their recent split, Katie Price and ex-fiancé Carl Woods are apparently desperate to get each other's face tattoos removed from their arms," a source told heat magazine.

Since going their separate ways,Carl shared a cryptic poston social media about depression.

"Depression can even come with laughs and smiles. Depression is a disease that can hit anyone at any moment. And if you are battling depression at this moment and refuse to give up you my friend are one strong individual – you got this keep going."

Before calling time on their relationship,Katie and Carl went on a romantic trip to Thailand together, where the mother-of-five is thought to have been filmingcontent for her OnlyFans.

While they were there, the 43 year old got some new ink andheld back tearsduring a gruelling three hour-long tattoo session.

She later showcased her two half-sleeve inkings while out for dinner with her then-fiancé.

According toThe Sun, her lower arm tattoo is dedicated to her mother, and is said to have cost around £180.

As well as getting the inking to honour her mum Amy, it’s thought that the former glamour model also had the tattoo to cover up another one.

The initial tattoo was done while she was on a night out in Miami, Florida, and the star later revealed it has no meaning and said it no longer fits her personality.

If Katie does get her Carl tattoo covered up, it won’t be the first time the star’s had to do this as she’s often had tattoos done in tribute to her partners.

The 43 year old did have Peter Andre’s name written across her wrist, but later had a large ‘X’ put through it.