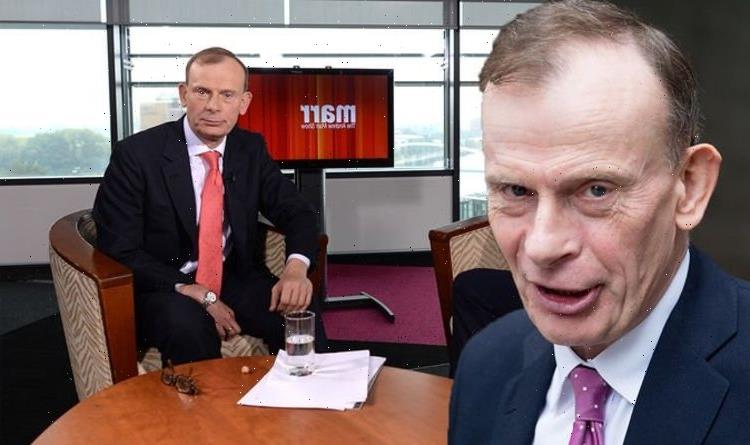 Broadcasting legend Andrew Marr, 62, has announced he will be leaving his long-time role at the BBC to embark on a new career with Global. On Twitter today, the star revealed that he is “keen to get his voice back” in the wake of what he predicts to be a “turbulent decade”.

The presenter of BBC One’s The Andrew Marr Show took to social media today to share his thoughts with his 197,300 followers after he announced he would be stepping down from his BBC role.

He wrote: “I think British politics and public life are going to go through an even more turbulent decade, and as I’ve said, I am keen to get my own voice back.”

As a BBC journalist, Marr has been required to keep his political opinions to himself for many years in the interest of impartiality.

However, once he moves to rival broadcaster Global, home of LBC, he will be allowed to speak freely.

Many Twitter users seemed intrigued by Marr’s remarks, with many of them questioning exactly what he was referring to when he talked about his “own voice”.

David Knopfler commented: “Have to be honest. I’m utterly baffled by the ambiguity of this comment about wanting your own voice back.

“You’ve certainly set yourself up as a person of interest to interview by this remark.”

Mike Rabbitte added: “It’ll be fascinating to hear what that actually means. You’ve had your own show for 16 years. Whose voice have I been listening to for all those years?”

In the momentous post he wrote: “Personal announcement. After 21 years, I have decided to move on from the BBC.

“l leave behind many happy memories and wonderful colleagues.

“But from the New Year I am moving to Global to write and present political and cultural shows, and to write for newspapers.”

Marr’s followers were quick to flood the comments section of his initial post with a mix of responses.

Beth Rigby, Political Editor for Sky News, wrote: “Sunday mornings won’t be the same without you on my telly. But very best of luck in your next chapter.”

While Mark Hopkins added: “It seems that Global is sucking up all the talent from the Beeb, and letting you guys really go for it.

“It’s why @lbc is becoming the choice station over @BBCNews – Good luck!”

In a third tweet Marr added: “I have been doing the Andrew Marr show every Sunday morning for 16 years now and that is probably more than enough time for anybody!”

In response to this, fellow journalist Tom Newton Dunn, who is presenter of T&G and Chief Political Commentator for Times Radio replied: “I’ve only done 18 months but I know how you must feel!

“An incredible stint Andrew, and many of us have learned bucket loads from you, congratulations.”

In an exclusive deal with Global, the broadcaster and journalist will present brand new programmes on LBC and Classic FM next year.