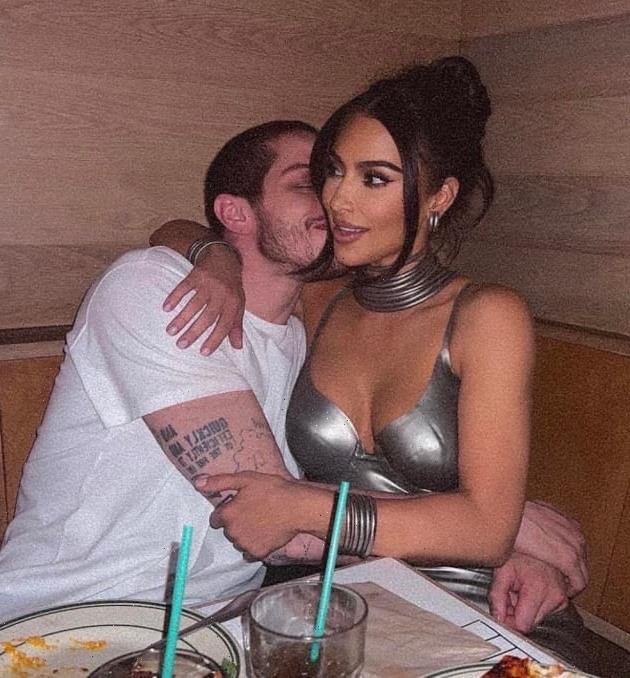 Kim Kardashian has finally addressed the penis-shaped elephant in her bedroom.

The 41-year old spoke about her relationship with Pete Davidson in depth during the April 12 episode of Dear Media’s Not Skinny But Not Fat podcast, delving into the couple’s first kiss — as well as a certain rumor that has constantly surrounded the comedian.

As for that smooch?

Kardashian hosted Saturday Night Live for the first time in October, acting in one sketch as Jasmine from Disney’s Aladdin.

Davidson portrayed the title character from this movie and the two locked lips at one point.

“When we kissed, I was just like, ‘Hmm!'” Kim told host Amanda Hirsch on the podcast, adding:

“It was a stage kiss, but it was still a little zing. It wasn’t anything like a super, crazy feeling.”

However, Kim explained on the broadcast that she then realized she hadn’t “kissed anyone else in 10 years,” considering she had been with Kanye West for four years before the stars got married.

They were spouses for six years before Kim filed for divorce in February 2021.

After swapping spit with Davidson, Kardashian thought to herself:

“I just got to get myself out there.”

Back to the main topic at stake here, though.

Davidson — who was engaged to Ariana Grande and romantically linked awhile ago to Kate Beckinsale — allegedly has a large penis.

We can’t say for certain just how well the guy is hung, but Kim went ahead on this podcast and confirmed that he acts like someone who does.

“A few days [after our kiss], I was like, ‘Hmm, there is some BDE action,” Kim remembered, citing the acronym for Big Dick Energy.

The mother of four went on to say she was a bummed after finding out that Pete had missed her after-party following the October Saturday Night Live episode.

“I thought about it later. I was like, ‘Damn, he’s the only person who didn’t come.'”

Kardashian and Davidson sparked romantic rumors last fall after they were photographed holding hands at Knott’s Scary Farm in California.

However, the reality star said this week that the outing actually came after the pair had already “privately” spent time together at the Beverly Hills Hotel.

She recalled of their first date, “We just chilled, hung out.”

The two first connected at the 2021 MET Gala in September, though.

“He had been asking around for my number a little bit,” Kim said.

“I saw him at the Met and he knew I was hosting SNL but it wasn’t announced yet. He came up to me and we were talking about SNL.”

We have no idea.

But Davidson has met Kim’s kids and also stood up strongly against harassment from Kanye West.