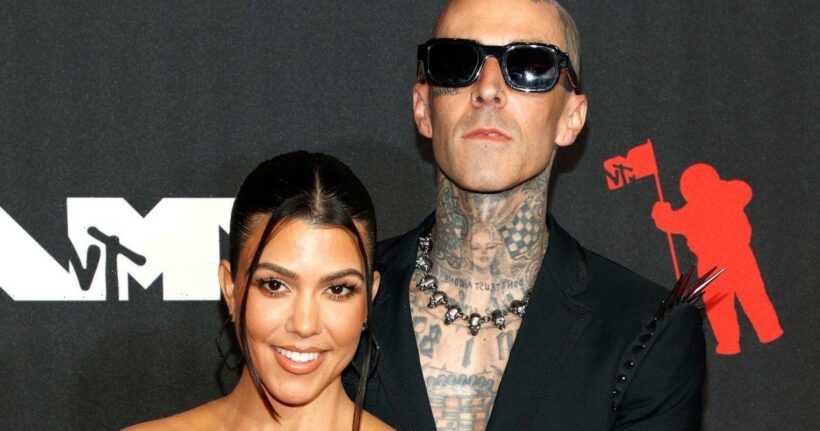 Kourtney Kardashian is engaged to be married after Travis Barker got down on one knee to pop the question on Sunday 17 October.

Keeping Up With The Kardashians star Kourtney and the Blink-182 drummer have been dating for less than a year and only went public with their relationship in January 2021.

The 42 year old raven-haired beauty, who was recently accused of "acting like a brat", took to her Instagram feed to confirm the news as she shared intimate snaps from the proposal, which took place on the beach in Montecito, California.

The photos see her wearing a black flowing dress with her short bob styled straight down as she has her arms wrapped around the rockstar, 45, who wears a striped T-shirt for the occasion.

The pair were surrounded by an incredible display of red roses shaped like a heart and several large white candles encased in glass.

In the caption, she simply wrote to her 146 million followers: "forever @travisbarker" – which he reposted on his own Instagram stories, reiterating: "forever".

TMZ reported the news, sharing photos from the sweet moment as they wrote: "The Blink-182 drummer got on bended knee Sunday at a beachside hotel in Montecito – where he pulled out all the stops before presenting her with an engagement ring and asking her to be his wife."

They went on to claim: "Of course, she said yes… and gave him a big smooch to celebrate."

Kim, 40, who recently mocked Kourtney PDA scenes in an SNL skit, later took to her Instagram stories to share a loved-up clip of the pair kissing as Kourtney wrapped her hand around his neck.

Zooming in, the reality star gave her 259 million fans a good look at the giant oval-shaped rock sitting on the ring finger of her freshly manicured hand as Bruno Mars' famous song Marry You played in the background.

Following the engagement, it appears the family sat down for an intimate meal together with some of the red roses from the proposal sitting on the table.

Kourtney's mum Kris Jenner, 65, sister Khloe, 37, as well as Travis' son Landon, 18, were all in attendance at they posted on their social media accounts, too.

This will be Kourtney's first marriage, however the star does share children Mason, 11, Penelope, nine, and six year old Reign with her ex Scott Disick.

Meanwhile Travis has been married twice in the past, with Melissa Kennedy and later Shanna Moakler, who he shares son Landon and daughter Alabama Luella, 15, with.

Stay up to date with all the latest on Kourtney Kardashian and Travis Barker by signing up to OK!'s daily celebrity newsletter.