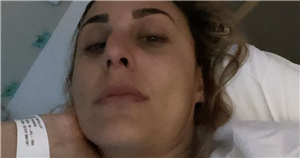 Married At First Sight star Amanda Micallef has revealed she was rushed to hospital after experiencing the "worst pain".

Shortly before her hospital dash, Amanda revealed to her social media followers that she was suffering from rhinovirus, which is a form of a cold.

The 34 year old Melbourne-based reality star then concerned fans as she posted a worrying picture of herself looking unwell.

Amanda is seen laying in a hospital bed while wearing a white gown in the photo, which she posted on her Instagram story.

MAFS star Amanda, who also had a hospital wrist band on in the photo, wrote underneath the image: "Currently in emergency, can't talk as my throat has blown up over night, fever is high!!!

Concerned fans soon rushed to Amanda's DMs to send their well wishes. And, when she returned home Amanda shared her gratitude with her followers.

She penned: "I am overwhelmed by the amount of messages I've been receiving of well wishes and support.

"Struggling to keep up and reply to everyone but it's fair to say my phone has blown up!!!"

Amanda continued to share an update with her fans as she said: "I'm home now recovering, with stronger dose of meds, but what a crazy 24 hours it's been.

"Massive thank you to my loyal friends and fans who continue to show their love and support" next to three red heart emojis.

Amanda starred on the 2020 series of Married At First Sight Australia, where she was matched with Tash Herz, but things soon turned sour.

In a sweet tribute posted in March she wrote: "Lana, you took my world by complete surprise.

"While I was quite content being single, and going on occasional dates, I never expected us to hit it off the way we have.

“Our first date, Burleigh Hill with a green juice on a picnic rug with a bush Turkey who almost attacked us lol.

"To say you tick all the boxes is a bit of an understatement.⁣ I’ve never met anyone as invested into love and open to all the possibilities that come with it as much as you!!!

"I love us, I love how much we laugh, or the way you tap your finger on your lips when you’re saying goodbye on face time."