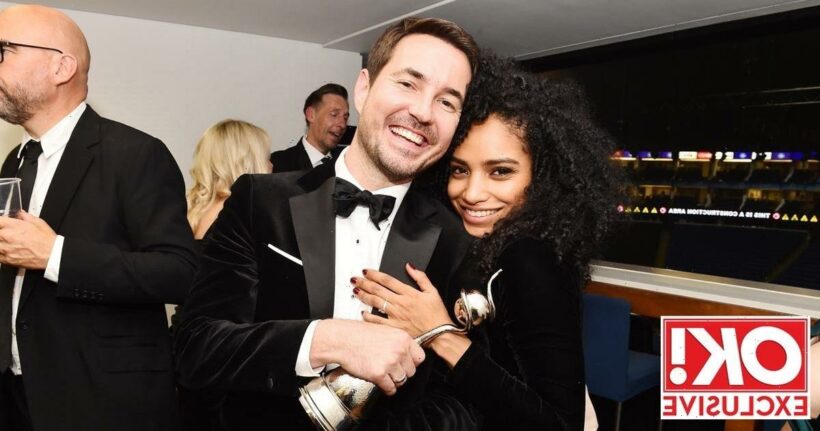 It was a night full of celebrations for Martin Compston as he scooped the Best Actor gong for his work in the BBC drama Line Of Duty at the National Television Awards.

Trophy in hand, the Scottish star celebrated his win alongside OK! in our box at the black tie event at the O2.

The star was joined by his stunning wife Tianna Flynn, with the two sharing a passionate kiss amid the chaos backstage.

Tianna was snapped leaning back into Martin's arms as he lovingly lent forward to kiss her.

It's no surprise that Martin found himself unable to peel his attention away from Tianna, who looked absolutely flawless in a striking, figure-hugging black dress.

Earlier Martin had paid tribute to his "lovely wife" during his acceptance speech.

Speaking about his win Martin said: "This has put a massive smile on my face."

He continued: "And thank you to my lovely wife for always holding the fort while I'm off playing cops and robbers."

Martin tied the knot with American actress Tianna in 2016, and the pair live in Las Vegas.

The Scottish star beat some strong contenders when it came to securing his accolade, including Years & Years singer Olly Alexander for It's A Sin, his co-star Adrian Dunbar and Bridgerton heartthrob Regé-Jean Page.

It's no wonder the programme was celebrating, as the programme's finale broke records and was watched by an average of 12.8 million viewers.

The BBC said it was the most-watched episode of any drama since modern records began in 2002.

This year's series – number six – saw fans finally learn the identity of 'H', the revelation viewers had long been waiting for.