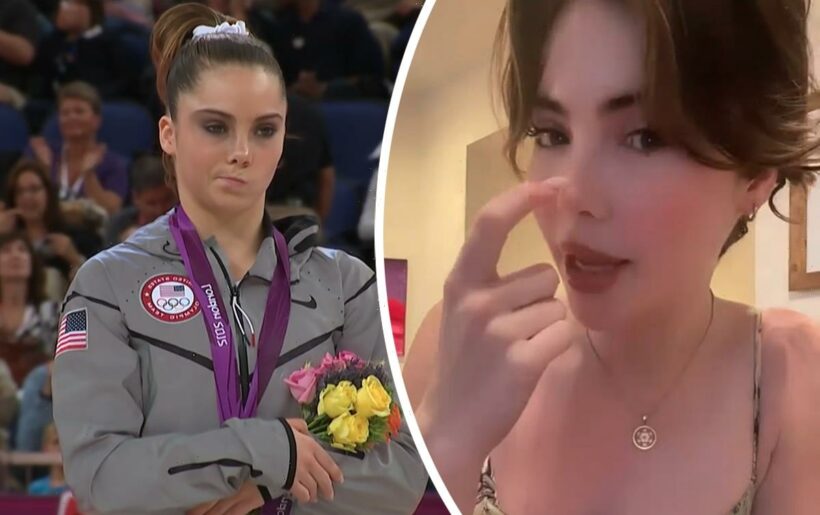 McKayla Maroney became nearly as famous for her “unimpressed” face as she did for her superlative gymnastics skills. But now that she’s speaking out and telling her truth, she may become just as known as a champion of justice for girls competing in gymnastics.

The gold medal winner spoke out in a series of Instagram Stories on Sunday, telling her story of competing at the 2012 Olympics.

She came close to perfection that year, with a vault that is considered by many to be the single best in competition since the change to the scoring system.

Sadly, the story behind that vault is horrifying.

McKayla explained how just two weeks before the games she had hit the back of her head so hard, a bone in her nose broke. The blow gave her a serious concussion as well, something it takes a long time to heal from. She revealed she failed the concussion test — so they gave it to her “over and over and over again” until she finally passed — something she’s pretty sure “you’re probably not allowed to do”:

Yep. Larry Nassar. The Team USA doctor who has been convicted on seven counts of criminal sexual conduct after over 140 gymnasts spoke out, saying he molested them. That Larry Nassar.

Because they had her training right after landing in London, before completely recovering from a concussion and still “dizzy as hell,” she broke her foot during practice on the beam.

“He also lied to and told Marta that my foot wasn’t broken because he was the one who helped with the x-rays and passed along the information.”

So not only was he abusing these girls, he wasn’t even doing the #1 basic job of a doctor and keeping them safe from injury??

“Marta was the one who told the press that it was an old broken toe. But it was actually my foot, the sesamoid bone in my foot was completely shattered and dislocated, and it hurt so bad.”

After Nassar lied to her, Marta refused to listen to McKayla:

“She yelled at me saying, ‘Why are you being so dramatic? This is an old break.’ It was not an old break. It was a fresh new dislocated, shattered sesamoid bone that was her fault completely.”

She explained that Marta had her train on the beam (post concussion) even though she wasn’t competing on beam. That’s when the foot break happened in the first place.

It wasn’t until after the Olympics that she got surgery — because the illusion was kept up that she was fit to compete and get a gold medal for Team USA. Even though doctors knew that postponing the surgery created more risk the bones wouldn’t heal correctly.

So yes, that vault you saw above, as well as her infamous silver medal ones following it were all done with a concussion, a broken nose, and a broken foot. As she puts it:

“Me competing at the Olympics was literally risking the rest of my gymnastics career.”

Afterwards she was able to still get foot surgery and somehow healed well enough to compete again:

“I had to get basically like a miracle surgery that they said they had performed on other football players and it failed. And they told me I’d probably never walk in heels again, never do gymnastics again. Thankfully the surgery worked.”

McKayla did gymnastics for a few more years before officially retiring in 2016. However, now that she’s not under the thumb of USA Gymnastics she’s not holding anything back.

See the whole set of stories, captured by a fan (below):

After her videos went viral she went off on Twitter, mostly answering questions from shocked viewers.

For instance, one fan asked why parents weren’t there protecting their kids who were competing. That’s when McKayla put the entire system on trial, revealing:

“These gymnasts parents aren’t even allowed in Tokyo right now, and they’ll be there for a month or longer.

My parents had to sign a waiver before me leaving for competitions or camps stating that I’m now in USAG’s care, and they’ll protect me. If they don’t sign it we can’t compete.”

Wow, that seems incredibly shady — especially knowing what was happening in the care of USAG. She continued:

“USAG says they’re not responsible for the abuse that happened. Well then who is? I was a minor in Tokyo & in London.

What possible rationale did they give for keeping the girls away from their parents?

“Parents are seen as a distraction, we would get in trouble if we spoke to them. My mom would send me packages of food to my hotel in Tokyo, because I was starving. She did everything she could to help me.”

She next blasted USAG for trying to pass the blame to the US Olympic Committee — she says NO WAY:

“USAG then points fingers at the USOC for abuse because they manage Olympics, international competitions, and all things Team USA.

Tell me why I never spoke to anyone from the USOC until the day I got to London?? and they just gave me rules of things I shouldn’t say or do.

USOC was so hands off I didn’t even know I was under their care — Or that the Karolyi camp I trained at every month was an Olympic facility managed by them!!?”

She then stuck the landing on this one, saying about the camp she trained at:

“To me it felt more like a gym in the middle of a forest, with limited food supply, and a doctor molesting me twice a day.”

She then addressed USAG and Team USA directly, tagging them on her shocking next message in which she described in detail the abuse at the hands of their approved doctor:

“So, @USAGym and USOC aka @TeamUSA

When I was under ‘your care’ in Tokyo competing for Team USA at 15, and my parents weren’t allowed to stay in my hotel, or see me in person…
When I was all alone, naked, with Larry Nassar on top of me for 50min balling. Who’s fault is that?”

It’s a pretty fair question. Nassar is serving a sentence of up to 175 years in prison — but what about all the people who allowed it to happen? Where are the other consequences? Where is the change?

McKayla then revealed when she actually did try to speak up about anything, she “got yelled” at:

“I was told to “Shut the f**k up, and don’t ever say anything like that about Larry Nassar again” by an older teammate I looked up to.

That scared the hell out of me, so I listened, and didn’t say anything for a long time. I just suppressed it until it came up again in 2015.”

But of course it wasn’t just those groups. She said while a lot of coaches weren’t OK with any of this, they also weren’t going to rock the boat!

“Marta and USAG ran things. The coaches just coached, they’re opinions didn’t matter. If anything they were scared to get blacklisted for complaining and ruin their athletes chances.”

Just standing by and letting it happen. Not much better.

She also blasted the FIG — the Fédération Internationale de Gymnastique — for not putting the safety of their athletes above TV ratings:

“The FIG is so disappointing.
They 100% prioritize TV over athletes every time — and it hasn’t even worked, views are down.
They’re insanely unsafe regulations definitely pushed me to retire. I have so many complaints.”

All of these people endangering these young women for their own personal glory.

And of course when one woman stands up for her own safety, look what happens! Simone Biles has gotten a ludicrous wave of criticism just for looking out for herself and knowing when it was safe to compete.

Speaking of that, obviously some took McKayla laying out what harsh conditions she faced — and still competed and did amazingly — as a “jab” at Simone for stepping down. But she made it absolutely clear:

“NOT A JAB. Today I spoke all about the truth of what actually goes down at the Olympics. This is MY story, it has nothing to do with Simone.”

It’s HER story, for sure, but it’s the story for a lot of other young women, too, unfortunately. When a fellow gymnast talked about the toll the sport took on her mental health, as well as her physical, Maroney responded portentously:

“It took me till now to be able to find myself, my health, and my voice again.. and it’s been 9 years since my Olympics. You’re not alone. I speak with many gymnasts and they all feel the same.”

It sounds like it’s time for these stars to rise up and say NO. To force change. Because the truth is, Team USA and the USAG are nothing without these girls.

What do YOU think about McKayla’s story? Will you see her as more than the “unimpressed face” girl from now on??