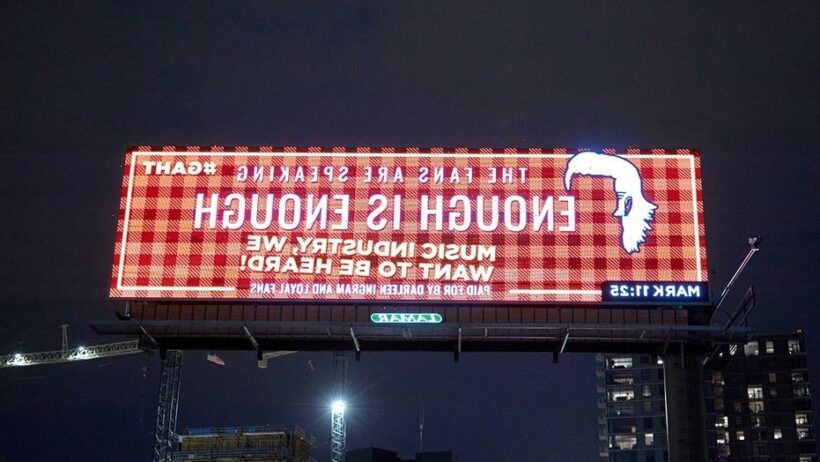 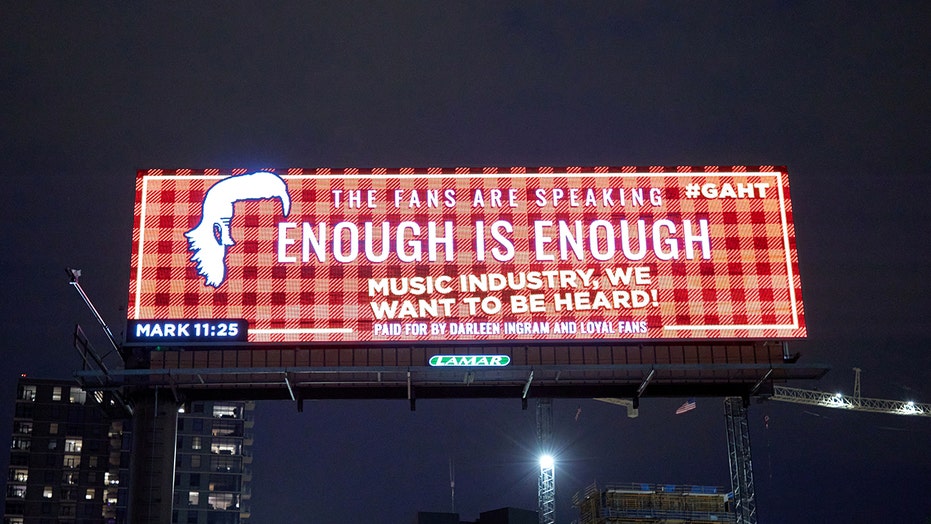 New billboards protesting Morgan Wallen‘s limited eligibility at the 2021 CMT Awards have popped up around Nashville, Tenn. ahead of Wednesday’s show.

Photos show the large, illuminated signage standing on Broadway in Music City. The billboards make it clear they were funded by fans.

The first line of the giant signs read, “The fans are speaking.”

“Enough is enough,” the statement on the billboards continue. “Music Industry, we want to be heard!”

The red and white billboards also a logo of Wallen’s signature mullet along with “Mark 11:25,” a bible verse, and the phrase “gaht” which is used by Wallen. 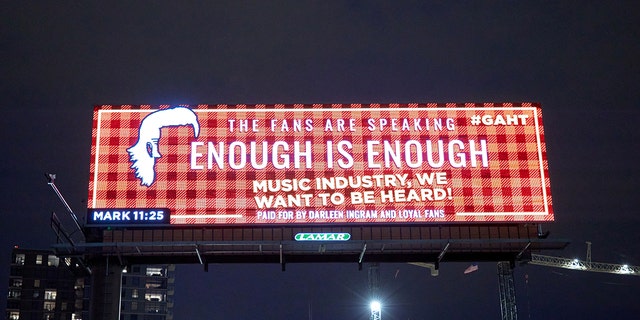 Fan funded billboards supporting singer Morgan Wallen are seen on Broadway on June 08, 2021 in Nashville, Tennessee. Wallen was caught on camera using a racial slur at the end of January 2021, since then his recording contract was briefly suspended and he has been barred from attending or performing at several music industry award shows.
(Jason Kempin/Getty Images)

Country Music Association spokeswoman Catharine McNelly confirmed in May that Wallen will not be eligible for individual artist categories, such as entertainer of the year and male vocalist of the year. The decision was made by CMA’s Board of Directors. The board decided that the 28-year-old artist could still be nominated for awards that recognize an artistic work, such as album of the year, song of the year, single of the year, musical event and music video, “so as to not limit the opportunity for other credited collaborators.”

This is the second time billboards in support of Wallen have appeared in Nashville. In April, at least six billboards appeared at high-volume intersections in downtown Nashville with the message, “His Fan’s Choice Entertainer of the Year. Support that boy from ‘East Tennessee!'” The billboards appeared days ahead of the Academy of Country Music Awards (ACMs), of which he was also deemed ineligible. 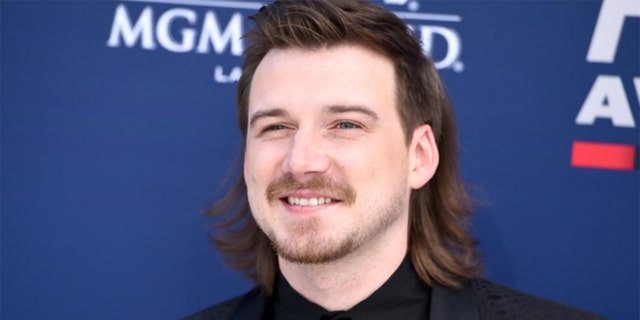 Morgan Wallen has been barred from individual artist categories at the 2021 CMT Awards.
(AP)

He was already one of the country genre’s biggest stars, with crossover hits like “Whiskey Glasses,” when the video was posted on TMZ in February. Wallen has apologized for using the slur and radio stations and streaming services dropped him from playlists, but his album sales surged.

His “Dangerous: The Double Album” spent 10 consecutive weeks on the top of the all-genre Billboard 200 chart, as well as 12 weeks as the top country album. He’s just one of four country artists to have an album spend 10 weeks at No. 1, among singers like Garth Brooks, Billy Ray Cyrus and Taylor Swift.

Kane Brown and Kelsea Ballerini will co-host this year’s show, which has seen Maren Morris and Miranda Lambert earn the most nominations with four each. A handful of performers are set to take the stage like Carrie Underwood and Luke Bryan, while R&B stars H.E.R. and Gladys Knight will also perform.

A rep for Wallen did not immediately return Fox News’ request for comment.