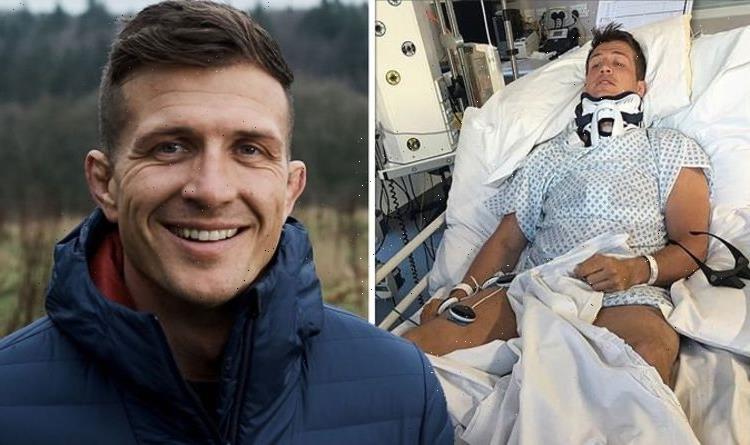 Former professional Rugby Union player Ed Jackson suffered life-changing injuries in a horrific accident back in 2017. Speaking to Express.co.uk, the broadcaster opened up about his recovery and his new book.

Ed was warned he may never walk again after he accidentally dived into the shallow end of a swimming pool.

The former sportsman had to undergo an emergency operation after his vertebrae were dislocated.

However, now four years on, the player turned broadcaster climbs mountains to raise money for charity.

Opening up about his recovery journey, he explained: “I have Brown-Sequard syndrome so my spinal cord was cut in half by a fragmented disc.

“So I can’t feel temperature, feel pain, which causes its own issues. I don’t sweat from below the nipples so I have overheating issues.

“I have bladder and bowel problems, sexual function issues, blood pressure problems, on average I wake up between 10 to 12 times during the night so I’m sleep deprived and my left hand doesn’t really work either.

“If you told me before the accident that I would have just one of those things in my life, it would have devastated me.

“But when is the context against what could have been the case, and the fact that I wasn’t supposed to be walking again and I may not have ever been independent again, all of it just seems like a win.

“The fact that I can go down the stairs in the morning, brush my teeth and get in a car and drive just makes me happy.”

His remarkable story forms the basis of his new book Lucky, which is part autobiography and part self-help.

Ed began writing this when he was first in hospital, documenting his recovery journey.

He explained: “I started writing when I was in hospital.

“I started keeping a diary, first of all on voice notes because I couldn’t write or physically move.

“And then I woke up one afternoon and my friend was going through all of my diary entries, obviously as your friends do with your personal diary.

“But he said, ‘You should make some of this public one day, or you should make them public now because it may help some people one day.’”

However, Ed admitted he was very reluctant as his time as a professional sportsman had left him reluctant to show any weakness.

He explained: “A lot of the things I was talking about were being very vulnerable and obviously a very understandably scary situation.

“I was reluctant to put that out but it excited me to consider it might help someone one day, and the feedback was incredible.”

Ed continued: “I just hope it can help some people, you know if it helps just one person to improve their life in any way then it was all worthwhile.”

Later this summer, Ed will also be presenting part of Channel 4’s coverage of the 2020 Paralympic Games.

He’ll be joining the likes of Clare Balding, JJ Chalmers and Steph McGovern in his coverage of the Tokyo event.

Lucky by Ed Jackson (published in Hardback by HQ, HarperCollins) is out now.