Pink is just one of the latest celebrities to share her thoughts about the U.S. Supreme Court’s ruling to overturn Roe Vs. Wade, the landmark 1973 court case that provided federal protections to those seeking abortions in the United States.

And true to her personality, the pop star didn’t mince words when she took to social media to address supporters of the reversal that gives each state the power to decide its own abortion laws.

‘Let’s be clear: if you believe the government belongs in a woman’s uterus, a gay persons business or marriage, or that racism is okay- THEN PLEASE IN THE NAME OF YOUR LORD NEVER F**KING LISTEN TO MY MUSIC AGAIN,’ the 42-year-old wrote to her 31.5 million Twitter fans and followers.

The What About Us singer then ended the post with some more tough talk: ‘AND ALSO F**K RIGHT OFF. We good?’ 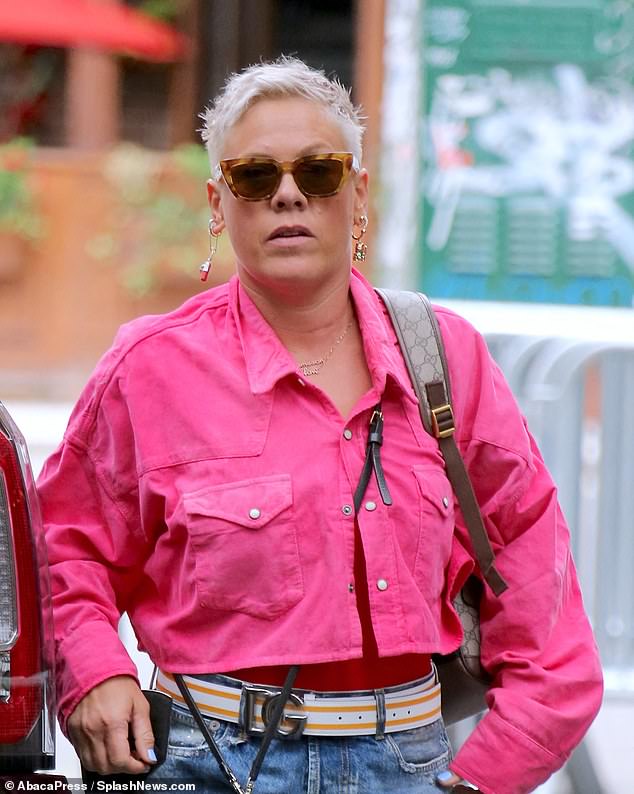 Voicing her concern: Pink, 42, offered a scathing message to her fans who support the U.S Supreme Court’s overturning of Roe V. Wade (1973)

Pink (born Alecia Beth Moore), a mother of two, would also go on to thank Olivia Rodrigo and Lily Allen for their performance of F**k You at the Glastonbury Festival in Pilton, Somerset, England this weekend.

Rodrigo invited Allen on to the stage for the F***k You rendition that was dedicated to the United States Supreme Court.

The previous day, SCOTUS voted 5-4 to reverse the landmark 1973 ruling that established women’s constitutional right to abortion in the United States. 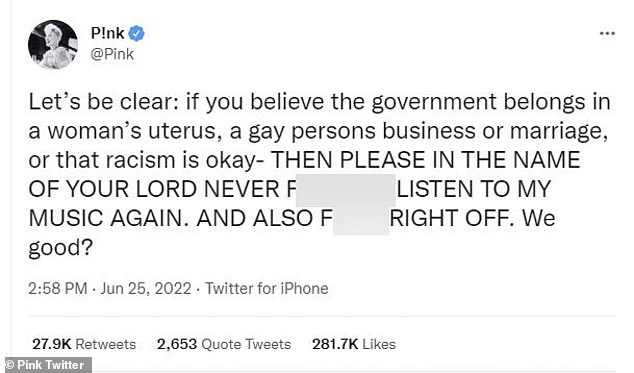 Taking a stance: The pop star told her fans who ‘believe the government belongs in a woman’s uterus, a gay person’s business or marriage, or that racism is okay’ to NEVER F***ING LISTEN TO MY MUSIC AGAIN’ 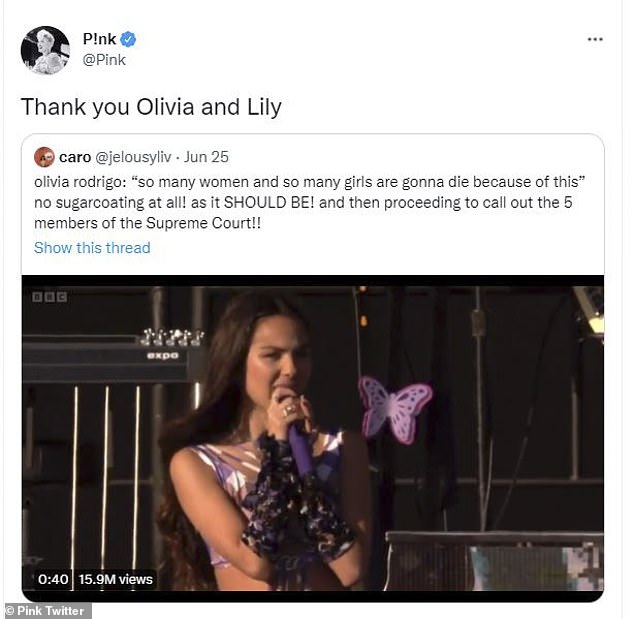 Pink (born Alecia Beth Moore), 42, would also go on to thank Olivia Rodrigo and Lily Allen for their performance of F**k You at the Glastonbury Festival in Pilton, Somerset, England this weekend, which was dedicated to the U.S> Supreme Court

Many people shared their support and ‘love’ for Pink with short comments like: ‘Love this woman’ and ‘my girl’.

But then there were those who tried to explain how giving the power to the states is a good thing.

‘This is their point, Alecia. Putting these things back to the states allows us to choose and further removes gov’t involvement. You stick to singing and reliving 1999 with subpar jams and I’ll stick to educating on the Constitution. We good?’

Someone else commented: ‘People shouldn’t use Twitter to vent… it never works out the way they intended.’

Then there were people who brought up how Pink’s bottom line could suffer if her fans who are supporters of the abortion ban do in fact stop listening to her music.

‘She is excluding half her fan base. Go woke/ Go broke,’ wrote on Twitter user. 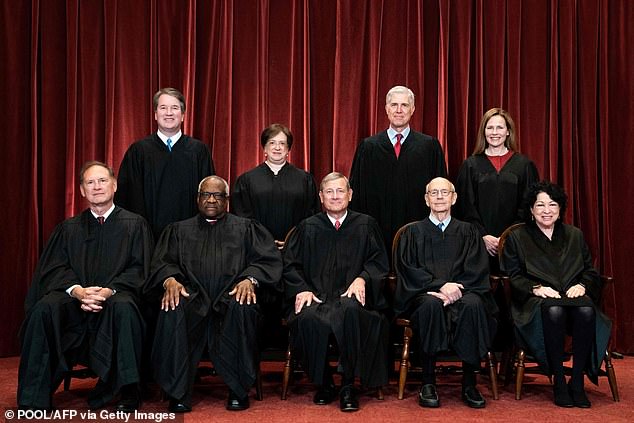 As comments mounted up, more Roe V. Wade supporters shared comments like: ‘I f***ing love you P!nk. Thank you so much.’

‘Roe was egregiously wrong from the start,’ Justice Samuel Alito wrote in his majority opinion, as reported by CNN, adding, ‘Its reasoning was exceptionally weak, and the decision has had damaging consequences. And far from bringing about a national settlement of the abortion issue, Roe and Casey have enflamed debate and deepened division.’

In a joint dissenting opinion, the court’s three liberal justices – Stephen Breyer, Sonia Sotomayor and Elena Kagan signaled that abolishing the constitutional right to abortion could pave the way toward the end of other freedoms, including those involving contraception and same-sex intimacy.

They added to the dissenting opinion: ‘With sorrow – for this Court, but more, for the many millions of American women who have today lost a fundamental constitutional protection – we dissent.’

Pink and her husband of more than 16 years, Carey Hart, are the proud parents of daughter Willow, 11, and son Jameson, six. 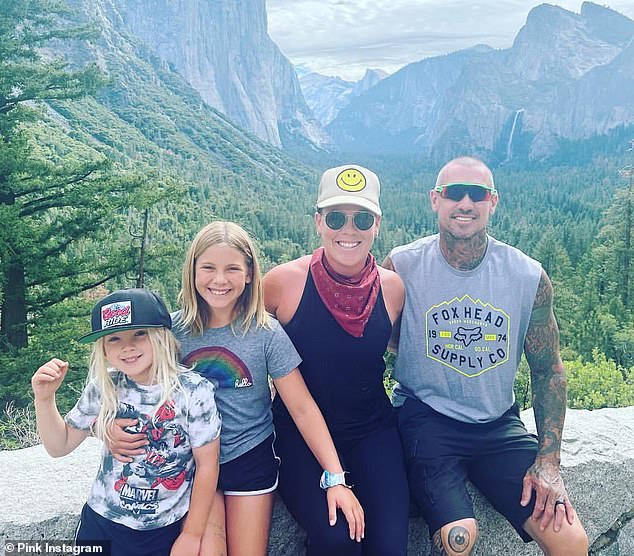 Her family: Pink scathing comment to her fans about the abortion reversal resulted in a slewof people sharing their comments on Twitter; Pink and her husband of more than 16 years, Carey Hart, are the proud parents of daughter Willow, 11, and son Jameson, six