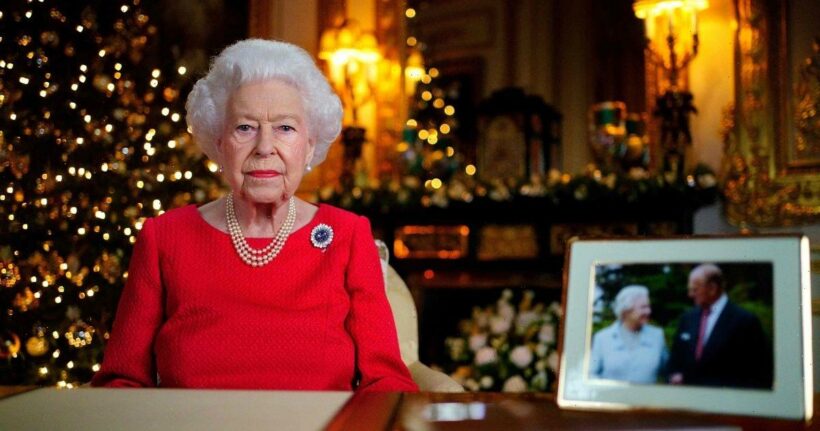 The Queen has paid a touching tribute to her late husband Prince Philip in her Christmas Day message by wearing the same sapphire brooch that she wore during their honeymoon in 1947.

Her Majesty, 95, who is facing her first Christmas without the late Duke of Edinburgh after 73 years of marriage, is spending another year at Windsor Castle after measures have been taken due to concerns of the spread of the omicron variant of coronavirus.

Buckingham Palace have released a photograph of the Queen sat at her desk in the White Drawing Room at Windsor Castle for her Christmas Day message which was recorded last week.

The monarch, who has not been seen in public since October, can be seen wearing a wool shift dress in 'Christmas red', by her senior dresser Angela Kelly, accessorised with her sapphire chrysanthemum brooch which she worn on a number of special occasions. Meanwhile the Queen was accompanied by a single framed photograph on her desk showing her and Prince Philip at Broadlands, Hampshire, in 2007 to mark their diamond wedding anniversary after they enjoyed their honeymoon at the rural country house in 1947.

Queen Elizabeth II first wore the sapphire chrysanthemum brooch during a photograph to mark their honeymoon.

A sweet portrait shows the then-Princess Elizabeth, aged 21, linked arms with Prince Philip, aged 26, with the beautiful brooch on her lapel.

The sapphire brooch is set in platinum and surrounded by diamonds. It was presented to the then Princess Elizabeth in 1946 after she launched a new oil tanker.

Her Majesty was given a sapphire bracelet by her late father, King George VI, for her 18th birthday after he noted that the stunning blue stones matched her eyes.

It comes after the Queen will have her son Prince Charles and Camilla for company this Christmas as her plans continue to change.

A spokesperson for Clarence House, the home of the next in line to the throne, confirmed in a statement of their plans to join The Queen for Christmas Day. The announcement read: "The Prince of Wales and The Duchess of Cornwall will be with Her Majesty The Queen on Christmas Day."

They will be joined by the Prince Andrew and his former wife, Sarah, Duchess of York, and their two daughters, Princess Beatrice and Princess Eugenie.

The Queen has had to amend plans for her festivities all through December, as she has already had to cancel her traditional pre-Christmas lunch with the extended Royal family.

These measures have been taken due to concerns of the spread of the Omicron variant of coronavirus.

Most recently, Her Majesty found out her son-in-law Sir Timothy Laurence caught coronavirus, so would therefore be unable to attend the Royal gathering.

This unfortunately meant Princess Anne would miss out on the festive event in Windsor Castle.

Instead Anne will be isolating with her husband at Gatcombe Park, their Gloucestershire estate.

A senior royal source told the Daily Mail: "Admiral Sir Tim has tested positive for Covid and is following all the appropriate rules. Christmas Day at Windsor will not be possible."