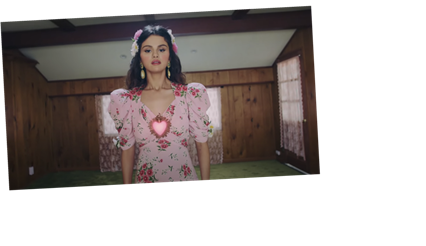 The singer dropped a new single and music video on Thursday evening, and while the song is a rare foray into Spanish-language music for Gomez (she last performed in Spanish when featured on DJ Snake's "Taki Taki" in 2018), the lyrics cover familiar territory: heartbreak.

"Once and for all / I am stronger on my own," she sings in the chorus of "De Una Vez." "And it's that, I don't regret the past / I know the time I spent by your side / Cut off my wings / But now my chest is bulletproof." That last part is perhaps evidenced by the flashing light-up heart affixed to her chest. Gomez, who wears a floral retro-inspired maxidress and flowers in her hair, experiments with elements of magic in the video. She wakes up in a bedroom that soon transforms into a lush garden. She makes her way to the kitchen, all four burners of her stove blazing in flames as she tosses a photo (of her ex, no doubt) into the fire. Records, suitcases, gramophones (?), and other miscellaneous items circle in the air above her as she delivers her final verse on the carpet of a '70s-style living room. Oh, and then the ceiling opens up.

This is, of course, fans' first look at the singer's forthcoming Spanish-language album, Baila Conmigo.

"This has been something I've wanted to do for 10 years, working on a Spanish project," the singer told Apple Music's Zane Lowe, "because I'm so, so proud of my heritage, and just genuinely felt like I wanted this to happen."

And what's more? "I actually think I sing better in Spanish." Well, there you have it.