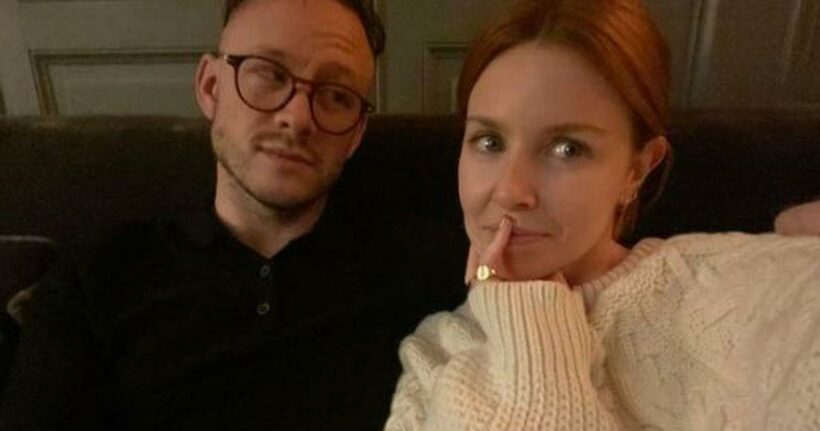 Stacey Dooley has sparked engagement rumours with her boyfriend Kevin Clifton after wearing a band on her ring finger.

Taking to her Instagram platform on Sunday, the 34 year old looked absolutely smitten as she cuddled up for a snap with the Strictly Come Dancing pro.

Broadcaster Stacey, who recently showed off her curly new hairdo, wore an oversized white jumper with the stunning gold band on her ring finger and a matching sparkler on her little finger that peeked out under her sleeve.

The snap, taken from their pair's romantic getaway to Sweden, prompted a whirlwind of speculation that the couple were taking the next step in their romance. "What are you two keeping a secret???", one person probed while another asked: "Engaged???" along with a green heart emoji.

Another added: "Is that an engagement ring poking out from your jumper?"

OK! has contacted representatives for Stacey for further comment.

After landing back in the UK, Stacey shared a slew of snaps from her Swedish getaway with Kevin, who she met while competing in Strictly back in 2018.

The duo were believed to be staying at the floating £900 a night Arctic Bath Hotel in Sweden, located on the Lule River in Northern Sweden.

Sharing a snap of herself in a blue snowsuit while standing in the snow, Stacey wrote: "Back from heaven," along with a white heart emoji.

The pair took in their scenic, icy surroundings while staying warm in a hot tub in another image.

The couple has been in a relationship for three years after being paired together on Strictly Come Dancing and winning the show.

Their romance was so strong that Kevin moved into Stacey's flat before the pair purchased their very own West London house together.

The professional dancer revealed in 2020 that he had begged bosses to pair him with the red-haired beauty after being a fan of her work.

Speaking to his girlfriend on his podcast, The Kevin Clifton Podcast, he shared: "I was a fan of your documentaries, and for the last couple of years I'd tweeted you a few times, going 'I really liked your documentary', and you were like, 'Oh cheers Kev!'

"So yeah, I was like ', Stacey Dooley's wicked. She'll be really interesting… great just to talk to about her experiences."