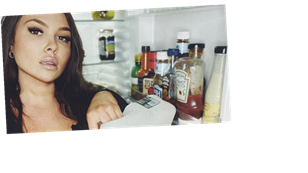 Fran Parman has sparked a furious debate amongst her legion of followers after sharing a photo of herself posing by her fridge.

The 29 year old, who recently revealed she is "broken" after the death of her grandfather Frankie, took to her Instagram feed to share a selfie, which sees her pouring milk over a bowl of Weetabix.

Standing in front of her open fridge, her 276,000 followers were able to get a good look at what she stores in there, including many of her sauces.

One eagle-eyed fan of Fran, who recently showed off her weight loss, couldn't help but notice the tomato sauce in the door shelf and felt the need to comment on it after finding the choice odd.

They wrote: "Yes and I just spat it out at the fact you have tomato sauce in the fridge…"

Another agreed as they said: "Ketchup in the fridge noooooooo!!" followed by a shocked emoji as a third agreed: "@franparmanbut fridge cold Tom sauce on chips !? no thanks haha," with an upset emoji and a laughing emoji.

While a fourth added: "i dont eat tomato sauce anyway but always assumed if its not stored on the fridge in shop then it doesnt need stored in the fridge..depending how quick you use a bottle, its good in the cupboard for up to a month. If you take months to consume a bottle then yeah put it in the fridge." [sic]

But others disagreed, insisting ketchup is meant to be refrigerated as it's more "hygienic". One person said: "you know what I never use to until someone told me I was unhygienic for keeping it in the cupboard". [sic]

A second wrote: "@franparman yes, it’s meant to be in the fridge. It says so on the bottle," followed by a clapping hands emoji, while a third added: "I keep mine in the fridge".

Sauce giant Heinz recommends putting its ketchup bottles in the fridge after opening and to consume it within eight weeks, but doesn't say it's a mandatory.

TOWIE stars: Past and present

The company also told Evening Standard recently: "Because of its natural acidity, Heinz Ketchup is shelf-stable. However, its stability after opening can be affected by storage conditions.

"We recommend that this product, like any processed food, be refrigerated after opening. Refrigeration will maintain the best product quality after opening.”

Consumer watchdog Which?, however, recently stated that it doesn't need to be refrigerated at all, further pressing the point that the natural acidity of tomatoes and vinegar will allow the sauce to stay good in the cupboard even after opening. The debate continues…