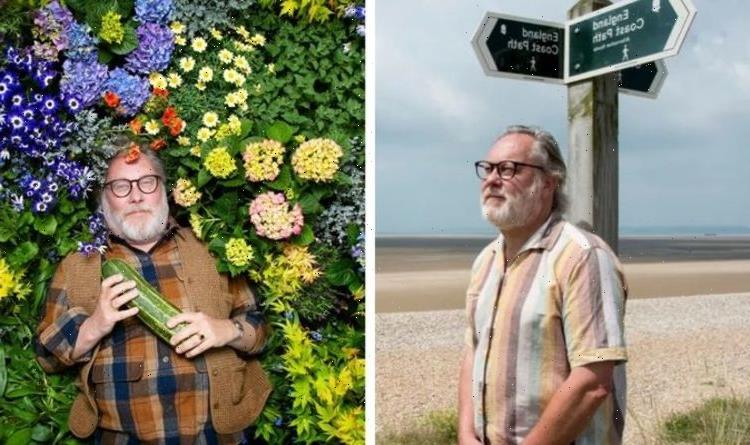 Vic Reeves and Nancy Sorrell dance together in Dover

On Walking With Jim Moir, the presenter, more commonly known as Vic Reeves, opened up about the tumour and how it had affected him. The 63-year-old was visiting Greatstone Lakes, on the RSPB Nature Reserve, where the huge sound mirrors had been designed to help Britain easily detect the sound of enemy aircraft during war.

The technology was built to concentrate sound waves and focus them onto a microphone, or a human listener with a stethoscope.

“I’ve only got hearing in one ear,” the presenter candidly confessed during his walk in the picturesque Kent countryside.

“It turns out I’ve got a benign tumour in my head which has severed the nerves between the hearing in my ear and my brain.”

Enthused about the area he overlooked, he told viewers: “It’s really mysterious and kind of creepy.

“Imagine the people who were stationed here… probably thinking, ‘There’s another war coming.'”

While he was standing there, the sound of an oystercatcher bird suddenly echoed loudly in the sound mirror, giving pleasure to Vic in spite of his hearing struggles.

A keen bird-watcher in his spare time, he has sadly revealed the tumour which permanently severed his hearing was about the size of a grape.

Also known as a vestibular schwannoma, it is inoperable, but not expected to become cancerous.

He admitted on the Adam Buxton podcast earlier in the year he had been forced to throw away all of his stereo LPs after the tragic hearing loss.

“I’ve got used to it [though],” he conceded. “[And] I like going out bird watching [though] I never know where the birds are. I can hear them but I don’t know what direction they are in.”

During Walking With Jim Moir, the presenter also trekked through various locations, stopping off to enjoy conversations with local folk along the way and his adventures included meeting a bee-collector, a worm hunter and a power-station manager.

At one point he enjoyed a stroke of a bee which sat directly on his finger.

He also enjoyed a steam train journey, viewed lighthouses and took a visit to Dungeness.

“I’ve never needed to reconnect to nature because I’ve never been disconnected,” he mused.

“I’m out three days a week in landscape that gives me a kick, gets me going.”

Moments when the comedian was – perhaps unintentionally – hilarious included his reaction to treks through the Kent shingle.

“This shingle makes you walk in a most undignified way – like a constipated dog!” he joked.

Later he added: “My legs ache [but] it’s the best feeling in the world.”

Finally, he revealed to viewers as the trip neared its conclusion: “There’s nothing better after a long walk than a fish and chips and a pint of beer.”