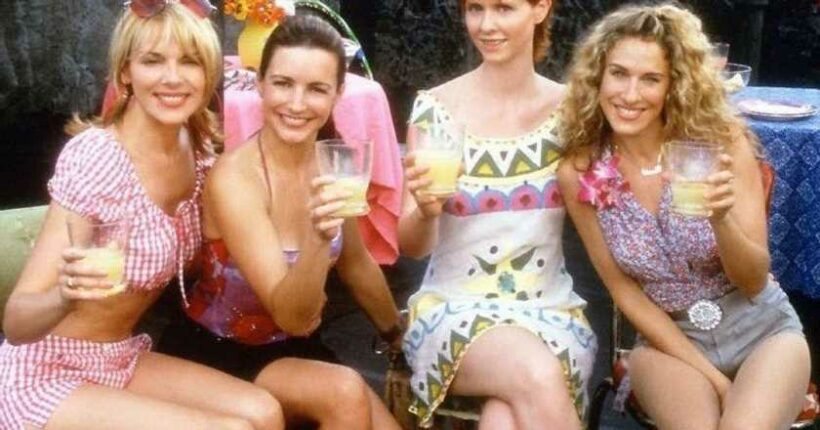 Written by Naomi May

Manolos! Baguette bags! John Galliano at Dior! Sex And The City was the original influencer before the world had even been introduced to the word, and these six women are proof.

And Just Like That, 15 years after she first graced our screens in a cream tutu and her signature head of curls, Carrie Bradshaw is making her return to our lives in the reboot of Sex And The City.

Accompanied by her Miranda Hobbes and Charlotte York-Goldenblatt, And Just Like That tells the story of Sex And The City’s beloved characters years on from the period in their 30s during which we first encountered them.

Before the world was introduced the term influencer and its now ubiquitous meaning, Bradshaw and her friends were the ultimate friendship group; one that cried, laughed and shopped together, amassing some serious clout while doing so.

How Sex And The City influenced people’s styles

Indeed, not only did Bradshaw put Manolo Blahnik firmly on the fashion map with her adoration for the heritage footwear brand, but she is still influencing sales and people more than a decade on from her Sex And The City debut.

Following the release of the And Just Like That filming photos earlier in the year, searches for Fendi Baguette bags – like that worn by Bradshaw – spiked by 45%, while searches for long tutus – like that also worn by the character – similarly rocketed by 110%.

But it’s not just in terms of sales for particular pieces that Bradshaw et al have exhibited their clout. It’s also in the countless women for whom Sex And The City has been a lifeline, a delicious form of escapism from the mundane, that the show’s characters have inspired them, often in the style sphere.

Whether it’s embracing Carrie’s confidence with clothes or loving Samantha’s unapologetic array of outré suiting, these are six women whose styles were, and continue to be, influenced by Sex And The City and the wondrous wardrobes of its protagonists.

“I was in my 30s when I first watched the show and had stopped wearing heels, thinking I was too old. I wasn’t a big heel wearer in my 20s either. After watching Carrie, and her shoe collection though, I realised how much heels can make you look and feel sexy. Inspired by her, I bought my first high pencil heel court shoes and wore them to my job, which was in a bank. I was super conscious but I kept thinking Carrie would wear these and not think anything of them. When you wear something like that for the first time, you draw a lot of attention – trust me, especially in a bank full of males.

Once I got over that, I bought more heels, heeled boots and I bought my first short pencil skirt. That was the start of a sexy new wardrobe. I felt so feminine and good, it was incredible. It completely changed my confidence in dressing.

I used to always think I wasn’t one of those sexy, pretty women but I decided to try copying Carrie anyway. It made me realise that anyone can be one of those women. It’s in the way you dress and the way you think and do it, despite the stares and attention you may attract.”

“I was so obsessed with Sex And The City and, years later, I still think of Samantha as the ultimate style icon – the boxy shoulders, the suiting, and the glamour that was both camp and confident. I loved it when the characters got into logomania too – I saved up for ages and bought the Dior vest that guest star Lucy Liu’s character wore in an episode. The wardrobe stylist Patricia Field was so smart – she really understood the assignment.”

“Where to begin. I watched Sex And The City for the first time when I was 16. I always knew I wanted to work in fashion but watching Carrie and her style was the deciding factor. When I turned 19, I moved to New York for a few months to work; I could have chosen anywhere in America, but of course, I had to head to New York to live my Carrie Bradshaw dream. Having travelled with two of my best friends (a real-life Samantha and Miranda) we all aspired to that Sex And The City lifestyle of going out in the city, dressing up in clothes we would never wear anywhere else, and all hoping to find our Mr. Big, of course. My two friends both fell into relationships quickly, but I spent most of the summer single and absolutely loving it. Feeling pressure from my other friends in relationships, I kept thinking to myself, “I am such a Carrie. I am an independent woman who is having the most fun and living it up in New York, single!” Oh, yes I received my fair share of Post It notes, but just like that, I have never felt so liberated and free in my style and in my life, all thanks to Ms Caroline Marie Bradshaw-Preston!

Samantha Jones and Carrie Bradshaw in Sex And The City were a formidable duo.

When I watched Sex And The City for the first time, I was blown away not just by the fashion but also by the bond between the ladies.

I have watched the show over 15 times since then because I cannot get enough of the fashion it portrays. In terms of style, Carrie and Samantha are my favourites; I bought a name necklace like Carrie’s and waited religiously for her signature sold out Manolo Blahnik blue Hangisi heels to come back in stock.

Now that I have my own brand, I regularly take inspiration from Carrie’s wardrobe. I designed a tulle skirt – inspired by the one made famous by Carrie – that I called the Bradshaw, while Samantha’s bold style still encourages me to be braver by wearing more colours and patterns rather than just blacks and neutrals.

Carrie, Miranda, Samantha and Charlotte in Sex And The City

I always thought I was fashionable, but it was only when I watched Sex And The City that I saw how powerful it could be to combine style with confidence. There are outfits that Carrie wears that are so outrageous, but she pulls them off because of her confidence and effervescence. On days when I doubted myself or my outfit, I copied Carrie’s confidence with clothes and, no word of a lie, it changed my life and the way that I dress. Now, I will always think before getting dressed: “What would Carrie do?”

I watched most of Sex And The City while living in New York, so it’s safe to stay, that it shaped all aspects of my life. Before it, and more specifically, before Carrie, I didn’t feel safe to dare when it came to my sense of style. Perhaps I cared too much about what others thought of me and what I wore said about my personality. I felt too scared to cross the line and be considered ‘too much’ so I just always made an effort to simply blend in.

I remember always wanting to dress ‘girly’, crazy and in pink, which was my favorite colour but I thought wearing it too much would make people think I was a real-life Elle Woods.

Within a couple of months, I found my first Carrie-inspired dream tutu skirt and rocked it to a date, which was the most intimidating scenario I could think of. What it made me realise was that by wearing it, I actually freed myself. My outfit was out there and so was I, and there was absolutely nothing wrong with that. In fact, being comfortable with who I truly was was one of the most honourable things I could do for myself.

I’ve worn many tutus since; 80% of my closet is now pink and I spent most of my money in my 20s on shoes and felt (mostly) guilt-free about it. I married a man who loves my ‘out there’ way of being and who dares to dress in pink once in a while as well. I can thank Sex And The City for most of that, and I cannot wait to see what inspirations I will get from the new season!

Images: courtesy of Getty and HBO.