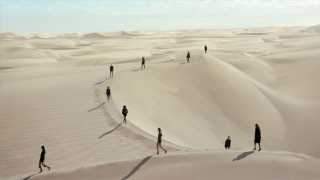 OPERATION DESERT WORN: Saint Laurent’s summer 2021 women’s fashion show video, which depicted models striding over the crest of giant sand dunes in heels, has garnered some 120.8 million digital views to date, according to the house.

No doubt the stampede to the livestream was partly incited by Saint Laurent ambassador Roseanne Park of Blackpink.

All it took was for her to write on her Instagram Stories to “Go watch it with me.” The New Zealand singer and dancer, better known as Rosé and the face of Saint Laurent’s recent denim campaign, boasts 34.6 million followers on that platform.

Blackpink is considered K-pop’s most fashionable girl group and each of its four members enjoys rabid followings.

According to Saint Laurent, “Rosé surely generated a significant engagement, however the ‘viral’ effect of the video mainly comes from the video itself.” It added that the brand would continue to collaborate with the pop star in the future.

Citing data from Wearisma, Saint Laurent noted that its total earned media value, or EMV, in December came to 89.9 million euros, contributing to a final year-to-date growth rate of 158 percent.

In the wake of the coronavirus pandemic, Saint Laurent and its creative director Anthony Vaccarello — famed for spectacular outdoor women’s catwalk shows set against the backdrop of the Eiffel Tower — decided to drop out of Paris Fashion Week and set their own pace for showing collections for the duration of the year.

In September, the brand reported 42.4 million views for a six-minute video for its spring 2021 men’s collection, featuring models leaping across Paris rooftops and walking a raised runway wrapped around the Eiffel Tower.

The brand is coy about where and how its show videos are filmed, preferring to build a mystery.

The Style Secrets Behind K-pop’s Most Fashionable Girl Group

Crafting the Visual Identity for a K-pop Group Through Fashion