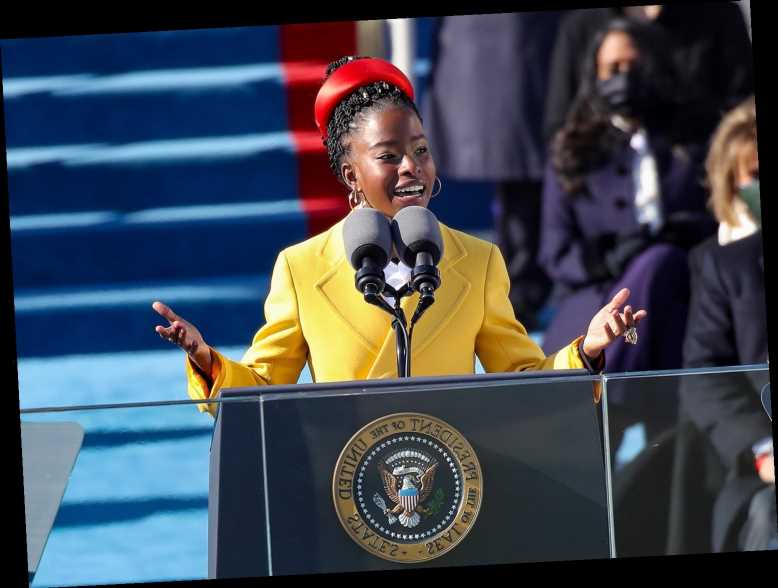 Amanda Gorman is taking the world by storm.

After making waves with her powerful reading of "The Hill We Climb" during President Joe Biden's inauguration last week, the 22-year-old poet has signed with IMG Models. According to the The Hollywood Reporter, the agency will focus on brand endorsements and editorial opportunities for the Harvard grad.

Model Gigi Hadid was quick to congratulate Gorman on joining the IMG family, posting the news to her Instagram Story with the caption, "WERK @AMANDASCGORMAN @IMGMODELS FAAAAAAM ! MAJOR." Aside from IMG and Hadid, Gorman has also caught the attention of Hamilton creator Lin-Manuel Miranda.

On Thursday, Gorman appeared on Good Morning America where she received a special surprise message from the star, congratulating her on her amazing performance. "Good morning Amanda Gorman, it's Lin-Miranda. Congrats again on yesterday," he said, prompting Gorman to nearly fall off her seat.

"The right words in the right order can change the world, and you proved that yesterday with your brilliant piece. I'm so incredibly proud of you and I can't wait to see what you write next," he continued. "Keep changing the world, one word at a time. You smashed it!"

Shocked by Miranda's message, Gorman told GMA's Robin Roberts, "I almost fell out of my chair."

"That's amazing!" the poet exclaimed with a huge smile on her face.

Gorman was only on camera from the waist up for the socially distanced appearance, but that didn't stop the budding style star from making a fashion statement with a fabulous fuzzy coat and hair bead accessories.

The poet also showed off her impeccable taste during an appearance on The Ellen DeGeneres Show on Tuesday, sporting a Chanel tweed jacket teamed with sophisticated white trousers. At the inauguration last week, Gorman chose a double-breasted Prada coat layered over a white collared shirt. She paired the bright yellow topper with a black leather pencil skirt, black leather pumps and a red satin headband, all by the Italian fashion label. And for the final touch on her Inauguration Day look, the young poet wore jewelry gifted to her by none other than Oprah Winfrey, which the television host and producer's longtime friend Gayle King revealed during CBS News' live broadcast.

"Maya [Angelou] did Bill Clinton's address. She reached out to Amanda because [Winfrey] bought Maya her coat that she wore that day," King explained. "She said, 'I'd like to get a coat for you to carry on that tradition.'"

"[Gorman] said, 'I've already picked out my coat. It's yellow. It's my favorite color.'" So instead of a coat, Winfrey gave Gorman earrings and "a ring that's shaped like a caged bird" as a tribute to Angelou's ionic poem, "I Know Why the Caged Bird Sings."

Winfrey also showed support for Gorman on Instagram Wednesday afternoon, writing, "I have never been prouder to see another young woman rise! Brava Brava, @amandascgorman! Maya Angelou is cheering—and so am I," alongside a photo of the young poet.