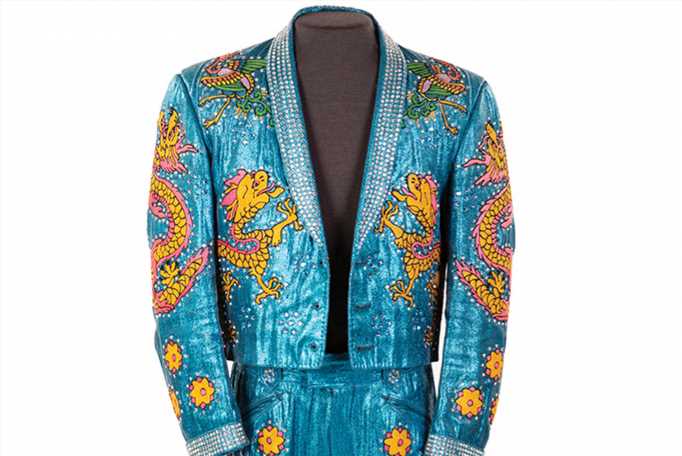 NASHVILLE OR BUST: Country music fans can get a jump on Sunday’s Academy of Country Music awards by perusing two online exhibitions.

The Country Music Hall of Fame and Museum is drawing back the curtains on the heritage of rhinestone cowboy fashion. There is no admission fee for the virtual shows, “Suiting the Sound: The Rodeo Tailors Who Made Country Stars Shine Bright” and “Dylan, Cash and the Nashville Cats: A New Music City.” The former explores the Western-wear designers who helped create the indelible “rhinestone cowboy” image. The multimedia exhibits are the first to be made exclusively for the museum’s site.

The phrase “rhinestone cowboy” was coined by Larry Weiss, who wrote and first recorded the song that Glen Campbell made famous. After being released in 1975, it was a hit with country and pop music fans. The phrase was meant to “capture the sense of nostalgia he felt when thinking back to childhood heroes like Roy Rogers, Lash LaRue and Gene Autry,” according to a spokeswoman for the Country Music Hall of Fame and Museum.

The rhinestone cowboy look emerged in the 1940s and 1950s, stemming from the tailor shops of Eastern European Jewish immigrants, who carved a niche by embracing America’s fascination with cowboy culture and the Western imagery. “Rodeo Ben” Lichtenstein, Nathan Turk and Nudie Cohn are among those whose designs continue to influence talents today.

Two of Cohn’s former apprentices, Manuel Cuevas and Jaime Castenada, relocated to Los Angeles from Mexico for their work. A Manuel jacket with fleur-de-lis embroidery and rhinestones designed for Rosanne Cash, a Cohn-inspired cowgirl costume that was worn by Country Music Hall of Fame-er Patsy Cline and designed and sewn by her mother Hilda Hensley are on view. There is also a Union Western rhinestone-covered mask that was made in response to the pandemic. A two-tone wool gaberdine outfit with chain-stitch embroidered flowers is also on view.

The exhibition also looks at contemporary talents like “Katy K” Kattelman, whose work is inspired by Cohn, Turk and Lichtenstein. It’s clear that classic Nudie suits and vintage stage costumes are not solely things of the past: Lil Nas X, Charley Crockett, Jenny Lewis, Post Malone and Margo Price have all sported them.

There won’t be any replicas for consumers to buy but apparel inspired by the “Suiting the Sound” exhibition is being offered. There will be about 12 more products offered, including hand-stitched patches from Fort Lonesome, an emblem of one of the designers in the exhibit. Should virtual exhibition goers want a bespoke piece, some of the featured designers like Cuevas and Fort Lonesome’s Kathie Sever design custom pieces.

The exhibitions were made possible by a grant from the National Endowment for the Humanities. “Dylan, Cash and the Nashville Cats” had a three-year run in the museum’s galleries ending in 2018. The digital version focuses on Bob Dylan’s Nashville recordings in the 1960s and the influence they had on the local scene. Online visitors will also learn how Johnny Cash’s television show helped to establish Nashville on the music scene.