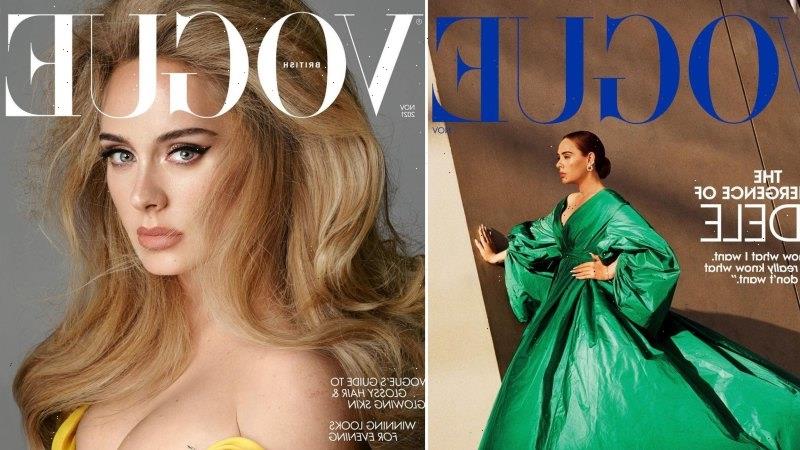 The current definition of a Vogue woman is a swearing single mum, who doesn’t mind a drink or two and will swap her heels for flats at important events without a second thought. And she can sing too. In short, Adele.

After media silence since 2016, the woman who has provided the soundtrack to almost every relationship break-up since her second album 21 in 2011, has landed on the British and US covers of Vogue with two very different photo shoots and interviews to promote her upcoming album 30. 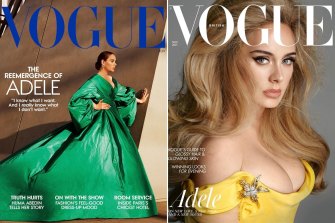 Here’s what you need to know about how the 15-times Grammy winner has changed, including her dramatic weight loss and how she remains the woman you would most like to hit the town with, although a 3am kebab is most likely off the menu.

This is Vogue after all, so we have to get weight loss rumours out of the way. The singer stresses that shedding 45.4 kilograms was a result of working out rather than dieting. It was about dealing with the emotional baggage of the break-up of her two-year marriage to charity executive Simon Konecki, the father of their eight-year-old son Angelo.

Adele’s trainer at LA’s Heart & Hustle gym reveals that strength training and movement were the tools for achieving her fitness goals.

“People are shocked because I didn’t share my ‘journey’. They’re used to people documenting everything on Instagram, and most people in my position would get a big deal with a diet brand. I couldn’t give a flying f**k. I did it for myself and not anyone else,” she told Vogue UK’s Giles Hatterley.

In a boss move Adele is also quick to shut down all the people who have claimed to work with her on shedding the kilograms, from dietitians to personal trainers.

As the former poster girl for women with body confidence, Adele acknowledges why some people were challenged by her changing appearance but not the vitriolic attacks.

“I understand why some women especially were hurt. Visually I represented a lot of women. But I’m still the same person,” she told US Vogue.

“The most brutal conversations were being had by other women about my body. I was very f*cking disappointed with that. That hurt my feelings.”

She still likes a drink

It would seem that Whispering Angel rosé and Aperol spritzes are Adele’s drinks of choice with US Vogue but for the UK Vogue interview Adele indulges in some lychee martinis. The takeaway is that we can all still dream of sharing a tipple with the 33-year-old.

With many references to therapy and concern for the emotional welfare of her son Angelo, the interviews portray the singer as a person with a good heart, but there’s a nimble brain at work too. The mother is evolved enough to refer to her son’s future partner as being either a man or woman, along with references to teaching privilege awareness.

Just don’t make Adele a poster child for wokeness. She has addressed the issues surrounding accusations of cultural appropriation over her appearance while on holiday in Jamaica wearing the country’s flag as a bikini top with her hair styled in bantu knots.

“I could see comments being like, ‘the nerve to not take it down,’ which I totally get. But if I take it down, it’s me acting like it never happened,” she said in UK Vogue. “And it did. I totally get why people felt like it was appropriating… I didn’t read the f**king room.”

The new relationship is real

Since appearing courtside at an NBA basketball game in Phoenix, Arizona with sports agent Richard Paul, people have correctly assumed that the singer has found love again. 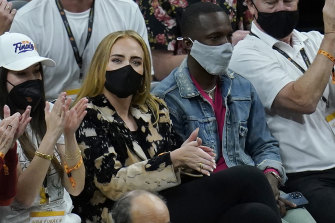 Adele confirms her relationship with sports agent Richard Paul in the Vogue interviews. The pair first appeared at an NBA finals game in Phoenix, Arizona.Credit:AP

Paul even shows up at the UK Vogue interview in LA, prompting references to how funny he is and how relaxed he is with her success. The man has LeBron James for a client, so we suspect he can cope with the hype.

The new album is real

The first track from the new album 30 is called Easy On Me and will be released October 15. After writing this song Adele put down her pen for six months feeling that she had “said it all” according to UK Vogue.

The revealed lyrics: “Go easy on me baby / I was still a child / Didn’t get the chance to / Feel the world around me.” 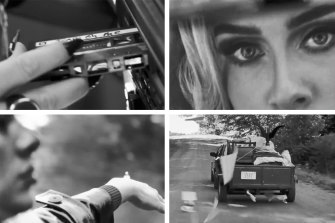 30 is supposedly not a break-up album, rather a way of talking about her divorce with her son. Either way, grab the tissues.

The final track on 30 is described as a soundtrack to the ending of the classic movie Breakfast at Tiffany’s. So grab more tissues.

She hasn’t completely lost herself to the fashion world

If turning up at the Bel Air Hotel for her US Vogue interview isn’t endearing enough, Adele grabbing a scrunchie for her hair midway through the UK Vogue interview does the “she’s just like us” trick.

Make the most of your health, relationships, fitness and nutrition with our Live Well newsletter. Get it in your inbox every Monday.

Most Viewed in Lifestyle