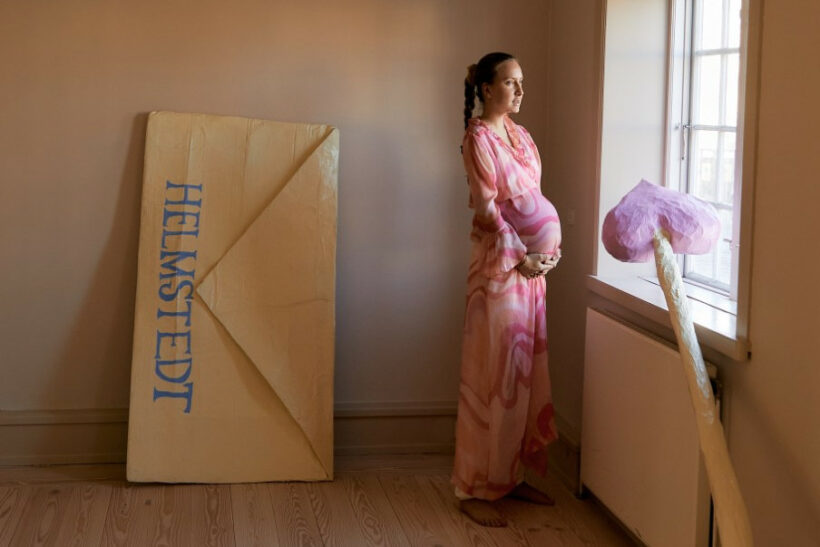 On April 22, Emilie Helmstedt welcomed her first child. In the weeks leading up to her delivery, the 28-year-old, Copenhagen-based designer and entrepreneur had been documenting on social media the important decisions she was faced with. Namely, that she elected to leave her company in the hands of her staff for at least the first few weeks after delivery — signing off from the company she founded in 2018 for the first time.

But Helmstedt said she is breaking with Danish tradition and taking an intuitive approach to maternity leave — reviewing best practices for balancing her work and daughter on a day-to-day basis.

Helmstedt’s namesake brand with its silky separates and cheerful prints (many of them handpainted by the designer herself) has provided followers with a visual respite from the drudgery of the last year. For Helmstedt herself, the time was an important moment of preparation.

“I’m finishing up my new collection now, we did the most so I could take off if I’m going into labor. So everything is set, like the [show scene], the styles — there is only technical work left that I don’t have to be a part of,” the LVMH Prize-nominated designer said a few days past her due date (she went into labor a few hours after her interview with WWD).

The 2021 Oscars: See All the Red Carpet Fashion Looks

“There is this image of these women at home 110 percent with their kids knitting and making the most amazing food, strolling around with wagons and making their whole life about their kids. It’s amazing, but I don’t see so many women on Instagram saying, ‘I take my kids to work,’ because it’s a taboo. I think it should be more accepted and wish that we have future female role models who say, ‘I love my child and I’m a good mom even though I work. That doesn’t mean I’m not there,’” she said.

She has embarked on a minimum two-week maternity leave with a wait-and-see approach to the time thereafter. “I made a little baby room in my office to have quiet time for her. I’ll be there some days of the week and some days I will stay at home. It’s really important to give my child some calmness and quiet, but that doesn’t mean I’m this stressed mom who isn’t present. I think women should speak up about being a mom in other ways that are acceptable and interesting to hear — we are not all the same,” said Helmstedt.

While it’s common in Denmark to take a yearlong maternity leave, the designer said, “I could not imagine what I would do. I am used to the development and creative process as something that gives me my drive and energy. If I didn’t have the motivation from work I think I’d maybe be a sadder person.”

But ultimately Helmstedt said it will come down to the needs of her daughter, named Blue: “It’s about feeling what my child’s mood is and what fulfills her so she is getting a good start in her life. It’s so important these first few months that she gets everything she needs — love and togetherness with me. I think it’s still possible to combine it with work.

“As a business owner I’m already empowered to make big decisions and that will help me when I’m raising this child. I have trust in myself that I will give the baby a nice life.”