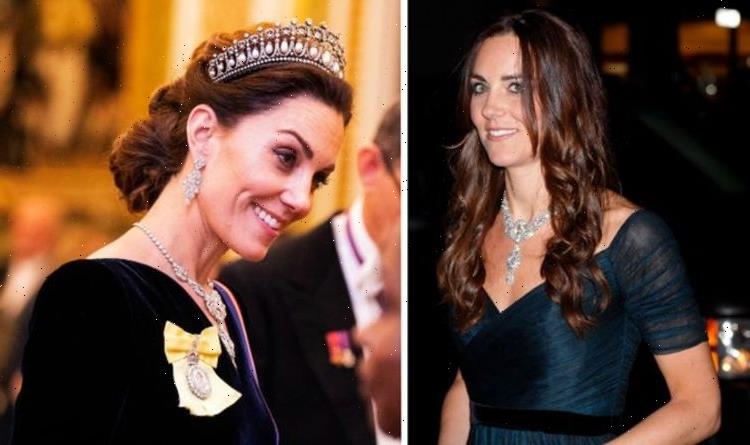 Given to Princess Elizabeth before she became Queen, the necklace is the most valuable piece of jewellery owned by any Royal Family. It is worth millions, according to new research.

The Nizam of Hyderabad necklace is worth a whopping £66.3million, according to online jewellers jewellerybox.

This is even higher than the Queen’s most expensive brooch, the Cullinan III and IV, which is worth a huge £50million.

The necklace was given to Her Majesty in 1947 as a wedding gift from the Nizam of Hyderabad.

Asaf Jah VII was the ruler of Hyderabad at the time and one of the richest men in the world.

But the Nizam didn’t stop at the necklace: he gave Elizabeth permission to choose another piece from his impressive jewellery collection.

She opted for a floral tiara, which featured removable silver flowers that have since been worn by the Queen as brooches.

The necklace matches the tiara and both pieces are covered in diamonds and set in platinum.

Created by Cartier in 1935, the necklace is intricate and features geometric diamonds which are nestled in the floral design.

Hugh Roberts, who was the Director of the Royal Collection and Surveyor of the Queen’s Works of Art from 1996 to 2010, once descried the jewel.

He said: “The pavé-set centre with detachable double-drop pendant incorporating 13 emerald-cut diamonds and a pear-shaped drop.

“The chain of 38 brilliant-cut open-back collets with an elongated oval brilliant-set snap.”

Elizabeth wore the necklace on multiple occasions after her marriage to Prince Philip, and even wore it for a series of portraits taken before her coronation.

In February 2014, the necklace was worn for the first time by Kate Middleton.

The Duchess of Cambridge donned the jewel for an event at the National Portrait Gallery, pairing it with a navy-blue Jenny Packham gown.

It was thought at the time the necklace was on loan to Kate, but the Duchess has worn it again since.

In December 2019, she was pictured wearing the jewel to a Diplomatic Corps Reception.

As for other jewellery, she wore dangling diamond earrings and the Princess Diana Lover’s Knot tiara.

The diamond and pearl headpiece was given to the late Princess as a wedding gift from the Queen in 1981.

Kate first wore the tiara for a previous Diplomatic Corps Reception, in 2015.