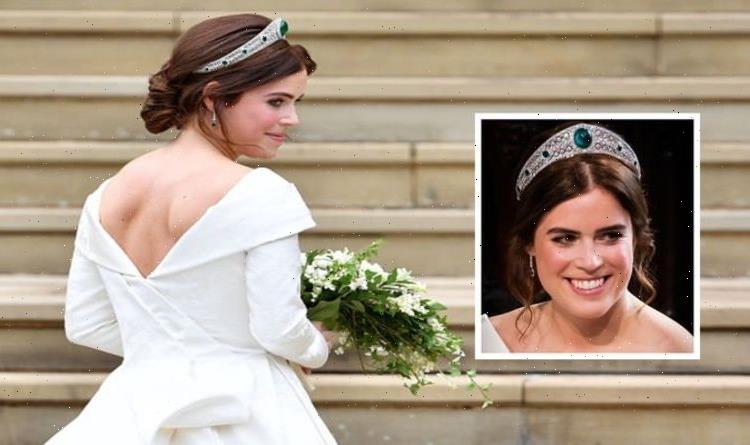 She wore a custom-designed Peter Pilotto wedding dress that showed off her childhood scoliosis scar, she didn’t select a traditional long veil, as is customary for royal weddings, and she borrowed the Greville Emerald Kokoshnik tiara from her grandmother, the Queen. Royal fans had initially speculated the Princess of York might wear the York Diamond Tiara, the same one her mother, Sarah Ferguson, wore on her own wedding day in 1986. But in a show of modernity and self-determination, Princess Eugenie instead chose to wear the Queen’s stunning diamond and emerald headpiece for her nuptials at Windsor Castle.

Steven Stone, London and Manchester-based Jewellers told Express.co.uk: “Wearing emeralds is said to promote friendship, peace, harmony, and domestic bliss by enabling the wearer to both give and receive unconditional love.

“In ancient Greece and Rome, emerald was said to be the gemstone of the goddess of love, Venus, which is perfectly fitting for the royal bride.

“Its original owner was Dame Margaret Greville, a famous society hostess who, upon her death, left her jewels to the Queen Mother.

“When the Queen Mother passed away in 2002, much of that collection, including the Kokoshnik tiara, went to Queen Elizabeth.

“In 2018, the Queen lent it to Princess Eugenie for her wedding day—making it the most extravagant ‘something borrowed’.”

The diadem consists of rose-cut diamonds set in platinum.

Six emeralds are spaced evenly on either side of a very large 93.7-carat emerald centre stone.

Princess Eugenie opted to let the tiara take centre stage, keeping her hair in a simple, loose chignon and forgoing a veil.

Her only other accessory was a pair of matching diamond and emerald drop earrings, a wedding gift from the groom.

Of the Queen’s many royal wedding tiaras, the Greville Emerald Kokoshnik tiara is one of the least commonly worn in public.

By contrast, Queen Mary’s Cambridge Lover’s Knot tiara is a favourite of Kate Middleton’s and has made many appearances over the years, as has the Queen Mary Fringe tiara.

The tiara may be the most expensive royal wedding tiara Queen Elizabeth has loaned out in recent memory.

It is worth even more than the Queen Mary Bandeau tiara the Duchess of Sussex wore for her wedding, and the Queen Mary Fringe tiara Princess Beatrice would wear nearly two years later.

Steven Stone estimates the tiara to be worth £10million, which would make it the fourth most expensive piece of royal jewellery ever, after Kate’s Nizam of Hyderabad Necklace, the Queen’s Cullinan III and IV, and her Williamson Diamond Brooch.

These three pieces are estimated to be worth £66.3million, £50million, and £25million, respectively.

The Greville Emerald Kokoshnik tiara is one of the few royal wedding tiaras with coloured gemstones.

Most other royal tiaras are largely diamond-centric: the Cartier Halo tiara Kate wore for her wedding to Prince William was entirely comprised of diamonds, as was Meghan Markle’s bandeau tiara.

The Greville Emerald Kokoshnik tiara was the first one that Princess Eugenie had ever worn.

In the Royal Family, tiaras are customarily reserved for married women.