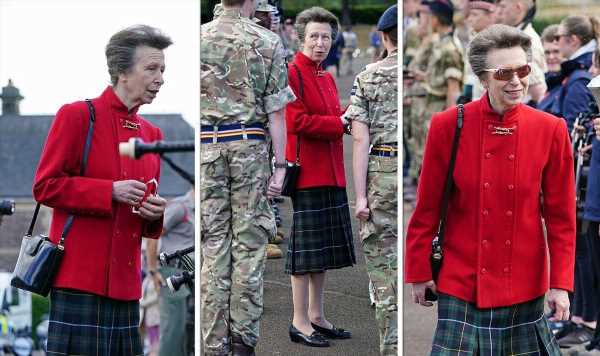 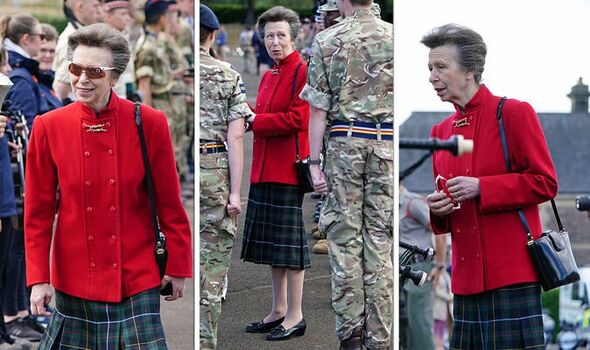 Princess Anne, 71, was in Edinburgh this morning to attend the rehearsals of the Royal Edinburgh Military Tattoo, ahead of their opening night tomorrow. The royal is the Patron of the Edinburgh Tattoo and met with training cadets at the Redford Barracks.

Princess Anne looked stunning in an outfit which paid tribute to Scotland and its people.

The royal donned a pleated tartan skirt in dark green with a blue, red, and yellow pattern.

She paired this with a bright red coat that featured an upturned collar and buttons.

A black leather saddle handbag was slung over her shoulder. 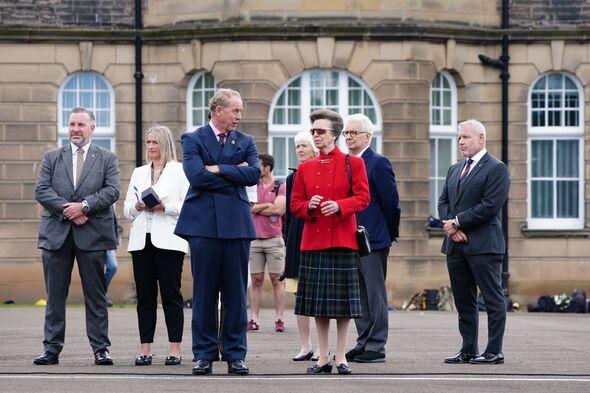 Anne completed the look with a pair of black leather shoes and a pair of tiny gold stud earrings.

The Princess’ other accessories included her usual pair of white sunglasses, which she has worn on several occasions this year.

The sunglasses are similar to ski glasses, but are on trend this summer.

Posting on Twitter today, the Royal Family wrote: “The Princess Royal was in Edinburgh this morning where she enjoyed a sneak peek of the @edinburghtattoo rehearsals ahead of their opening night tomorrow.

“The Princess, who is Patron of @edinburghtattoo, met piper training cadets at the Redford Barracks.”

Royal fans were quick to express their opinions on the Princess’ visit to Edinburgh today.

Twitter user Angela Zubac wrote: “Wonderful to see! The armed forces Tattoo is a family favourite for me too!”

User @rhyozhen said: “The Princess Royal is such an underrated working royal… So hardworking.”