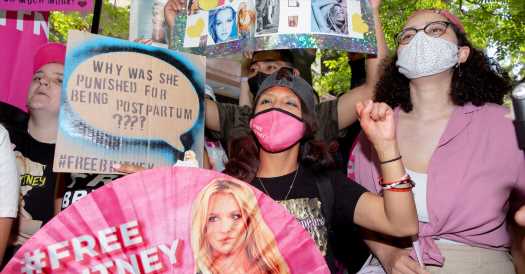 LOS ANGELES — Hours before Britney Spears was scheduled to address a judge in Los Angeles about her conservatorship arrangement, breaking over a decade of silence on the matter, more than 100 people gathered outside the courtroom in a show of support.

Some had traveled from as far as Las Vegas; Detroit; and Charlotte, N.C., to be present for what many in the #FreeBritney movement saw as a potential turning point in Ms. Spears’s story: the moment when she would speak publicly.

“I never expected this,” said Kevin Wu, 36. “I would have continued to fight no matter what. We thought the conservatorship would end much earlier. We thought public pressure on things would set it in motion.” 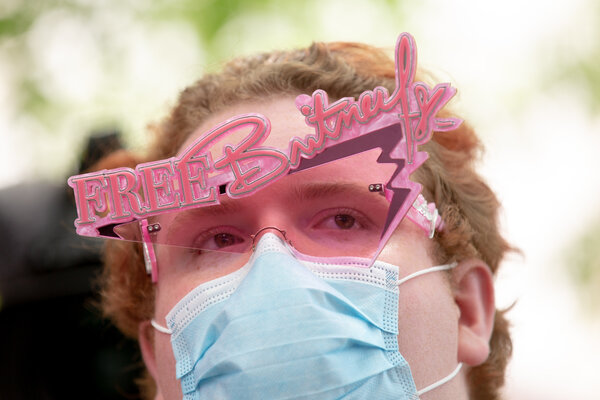 Mr. Wu, a data analyst living in Hollywood, organized a protest of the conservatorship in May 2019. Since then, the support for Ms. Spears has grown far beyond her most loyal fans. Many present on Wednesday were conservatorship reform activists, who were motivated to protest Ms. Spears’s legal arrangement not from a love of her music, but from personal experience.

Among them was Terri Black, a former accountant turned full-time advocate for the Center for Estate Administration Reform, which she established after the death of her father in 2015.

“My father was the victim of a fraudulent conservatorship,” said Ms. Black, who lives in Charlotte, N.C. She saw parallels between Ms. Spears’s situation and her own struggle to regain control of her father’s estate.

Once Ms. Spears began to speak, her prepared statement was broadcast to the crowd outside the courthouse by a microphone held to cellphones on speaker.

Ms. Spears told the judge that her conservatorship was “abusive” and sharply criticized her father, as her parents and their lawyers listened on. She spoke about being forced to work against her will, feeling drugged and being denied access to a doctor who would remove an IUD.

“I’ve been in denial. I’ve been in shock. I am traumatized,” Ms. Spears said over the phone during the remote hearing, which she insisted be broadcast publicly. “I just want my life back.”

This was something of a watershed moment for the #FreeBritney movement, a campaign by fans who see the conservatorship as a greed-fueled, authoritarian means of controlling Ms. Spears’s life and fortune. Her testimony appeared to confirm their worst fears.

James P. Spears, the singer’s father, was appointed the pop star’s conservator in 2008, following a series of public struggles and concerns around her mental health and substance abuse. Mr. Spears, 68, currently oversees his daughter’s nearly $60 million fortune, alongside a professional wealth management firm she requested; a licensed professional conservator took over Ms. Spears’s personal care on an ongoing temporary basis in 2019.

The phrase “Free Britney” originated in 2009 from BreatheHeavy.com, a Spears fan site. The website’s owner, Jordan Miller, said at one point that he received an irate call from Jamie Spears, who threatened to have the website taken down.

The movement gained adherents over the following decade, as well as attention from fellow pop stars. (Miley Cyrus shouted out the phrase during a concert in 2019.)

Outside the courthouse, passing cars honked their horns in support of the activists as speakers pushed for conservatorship reform at both the state and federal level.

After the testimony, Mr. Wu said he was in shock. “The reality is worse than we expected,” he said. “I’m super proud of her for sharing her truth.”

He noted that while it was powerful to hear Ms. Spears speak, “there are no changes to the conservatorship yet.”

Lisa MacCarley, a Los Angeles attorney focused on probate and conservatorship law, addressed the group outside the courthouse, affirming their convictions about Ms. Spears’s situation.

“Young people of the #FreeBritney movement,” she said, “you have been right all along.”