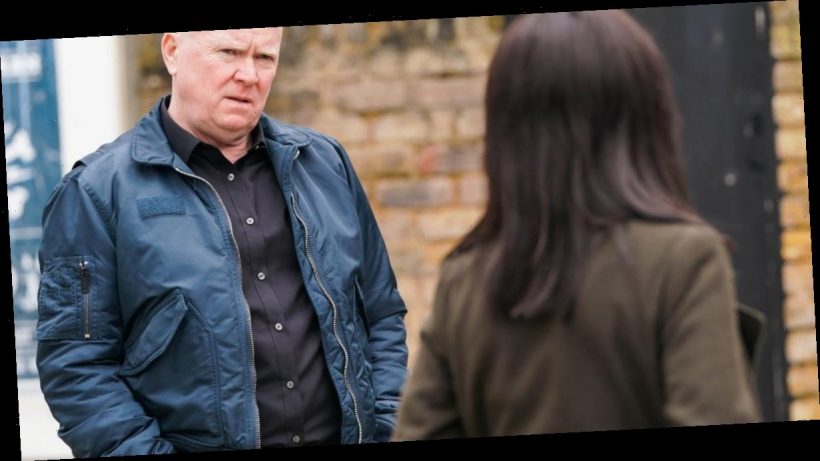 An Eastenders obsessed journalist who is looking for love decided to finesse his chat up technique with help from his favourite soap.

Tom Haynes, from My London, decided to use famous quotes from Eastenders romeos to hot on potential partners.

He took inspiration from the likes of Ian Beale and Phil Mitchel who he says “get around”.

After all there have been multiple weddings shown for many of the male characters – and even more planned weddings which never went ahead.

Despite their gruff attitudes the characters generally have no issues finding a partner. So, will their schtick work out for Tom?

What's been your funniest online dating experience? Tell us in the comments…

Tom decided to go bold with his advice to Minty about weddings, featuring a wife count that is now ever so slightly outdated.

Thankfully his first match played along, so he followed up with arguably Ian's most iconic moment in the show thus far, in the hopes that this man would be his Phil Mitchell – and to his surprise he was pretty nice about it.

He's right, you know. Ian does get a pretty raw deal most of the time. Case in point, the line about feeling sick is spoken when Phil tries to drown him in the loo.

Effectiveness: 6/10 not sure where to go from here. Ian's melancholy shctick isn't really conducive to romance, despite his track record.

Phil is a man of very few words and is more well known for that one monosyllabic grunt he's always doing. But people love a bad boy and Phil is very much a Bad Boy™ – how would he fare?

Tom kicked off with Phil's classic battle cry and needless to say the recipient of this bit of chat responded very positively indeed – a little too much so.

Beyond that he really had to bend to Phil's catalogue of lines.

But surprisingly, his match did not seem to care and immediately offered his Snapchat so I guess Phil really is the king of the square.

In the end Tom scarpered after realising his match was a man of the law, which Phil absolutely would not vibe with.

Effectiveness: 7/10 I am suspicious of anyone who would be into this.

Ben is literally man of many faces and moods, having been played by more people than a Nintendo Switch in one of those rooftop terrace adverts. But to assume Ben's persona Tom simply had to go in with his most immortal line.

In honour of Albert Square's most chaotic gay, the journalist ventured into Grindr for this one, and the audience was as gutter-brained as you'd expect.

A subsequent effort allowed me to roll out some of Ben's more recent one-liners and they were fittingly effective.

This one actually nearly sussed Tom out once he dropped the M-bomb.

So the singleton gave him the satisfaction of pulling back the curtain.

Zoe has a tough time in life when it comes to her family tree, as she knows it is basically sawn off at the roots and replanted upside down, so to reflect that Tom led with this wham line.

He wasn't sure how to respond to the brutally honest response so he panicked and bailed.

Effectiveness: 2/10 but really depends who you are.

Frank has some great little tidbits in his arsenal, and the unlucky soul Tom tried them out on actually seemed to really enjoy them.

As an aside, "you're a wave short of an ocean" is now something the journalist intends to repeat in his daily life.

The singleton's match got very chatty at this point but Tom didn't want to keep insulting him with Frank's largely quite mean repertoire so he left him be given he'd been a good sport.

Effectiveness: 8/10 Frank is the man.

Shirley is a gay icon: The leather jackets, the hair, the scowl. But would that translate to a winning opener? Yes, yes it would.

And thanks to Shirley, a guy called Tom handsome.

He admitted: "My self-esteem has been restored courtesy of Dame Shirley Carter."

Effectiveness: 9/10 because you know what I am handsome.

Tom borrowed this classic from Peter Beale because unlike everything else here it's the sort of line you could feasibly use in real life and not because I have fancied him, like, all my life.

Effectiveness: 3/10 I think you can only get away with being this bland if you are as eye-meltingly fit as Peter is. Okay, now it's time for some real Hall of Fame EastEnders goodness.

Kat Slater, and the quote to end all quotes.

Tom decided to see if his potential matches across all the apps would be able to complete the iconic line.

And to his utter disgust, most of them didn't manage it.

Just a total lack of enthusiasm from my man here – where has he been?

This person thought he was making a Drag Race UK reference, which is better than the above but quite offensive to Kat.

Thankfully, one person knew what Tom was on about.

They even scored extra points for the multiple as.

Tom added: "No one passed the second test, however, except one man.

"It's this guy – he knew not one but two of Kat Slater's most celebrated lines and honestly and even knew to give the second one the caps it deserves. I will probably marry him."

Effectiveness: 10/10 all hail the Queen.